REDBLACKS win tight one with Alouettes 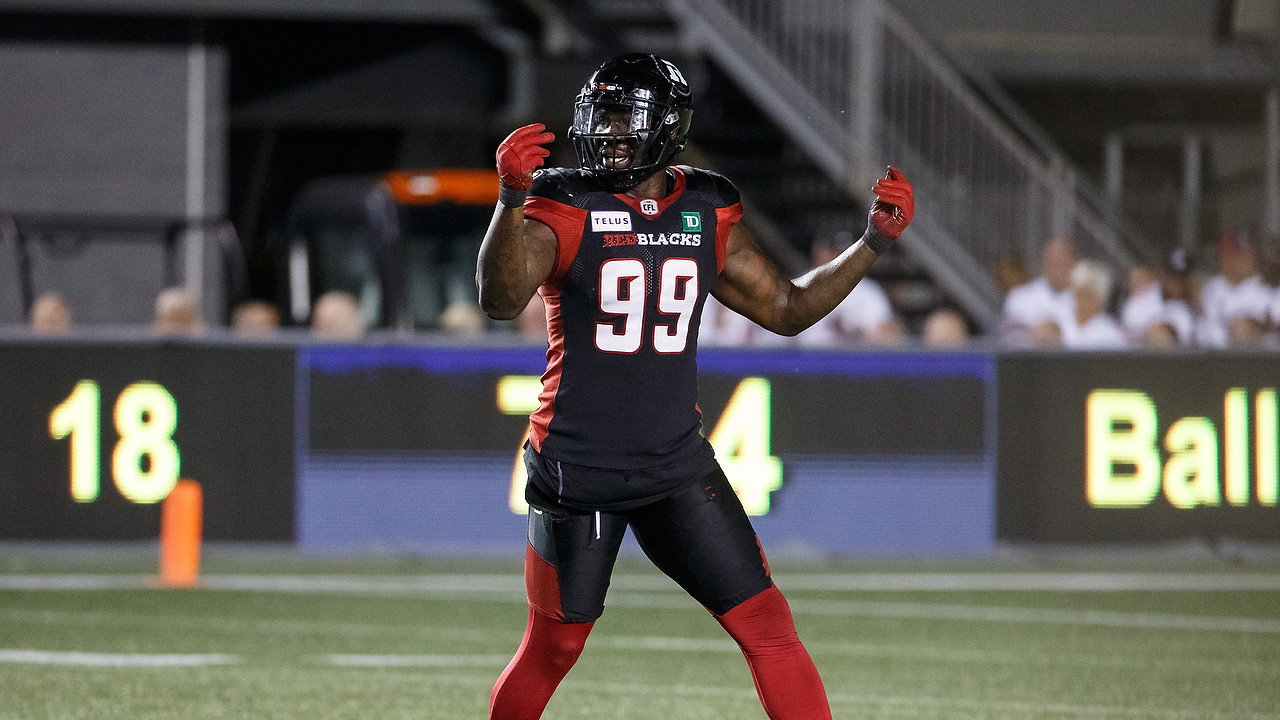 REDBLACKS win tight one with Alouettes

It was another heart-stopping, last second win for the Ottawa REDBLACKS who beat the Montreal Alouettes 24-17 in front of a sellout crowd at TD Place Stadium. William Powell punched the ball in to cap off a last-minute, game-winning drive for the REDBLACKS.

Trevor Harris went 44-for-54 on the day for 487 yards and a touchdown. Powell rushed for over 100 yards for the first time since week four, while Greg Ellingson surpassed the century mark in receiving yards.

A.C. Leonard and Danny Mason were each able to sack Alouettes quarterback Johnny Manziel, and Jonathan Rose forced two fumbles. The Ottawa defence has held opponents under 30 points in seven of their eight games this season.

Turnovers were the story of the first quarter. REDBLACKS receivers fumbled the ball twice, while an Alouettes receiver fumbled deep in the Ottawa red zone. Quarterbacks Trevor Harris and Johnny Manziel were methodical, going a combined 17-for-20, but the turnovers prevented any scoring in the first, save for a Montreal single.

Early in the second quarter, Montreal got on the board. Harris threw a pass that was deflected at the line right into the hands of Chris Ackie, who ran 35 yards to the end zone. Montreal had conceded a safety on the previous drive, so the score was 8-2.

Neither team could get into field goal range for much of the first half. Lewis Ward trotted out and converted a 45-yard field goal – his 20th consecutive made field goal. That would be all the scoring through the first two quarters, as Montreal led 9-5.

On the first drive of the second half, Harris found Dominique Rhymes on consecutive passes and marched the troops into the red zone. Trevor Harris then hooked up with R.J. Harris on a well-executed route in the end zone for the first offensive touchdown of the game. The two-point convert failed, but Ottawa held an 11-9 lead.


Aided by an unnecessary roughness penalty, the Alouettes moved into the Ottawa red zone on the very next drive. Manziel scampered to the end zone, but Jonathan Rose forced the ball out before he crossed the goal line. Montreal offensive lineman Kristian Matte jumped on the football for the touchdown, making the score 16-11.

Montreal kicker Boris Bede earned a single on the ensuing kickoff, but that would be all the scoring in the third quarter, which concluded 17-11 in favour of the Alouettes.

The REDBLACKS looked to claw back into the game. Lewis Ward knocked down a 33-yard field goal, and the defence forced a quick two-and-out.

With a field goal separating the two teams, Harris guided the offence on a 13-play drive that was capped off another Ward field goal. With the three-pointer, Ward tied the game and set a CFL rookie record with his 22nd consecutive field goal.

After another Montreal two-and-out, Ottawa got the ball back with 2:15 on the clock. Harris completed three straight passes, and then William Powell shimmy-shook his way to the ten-yard line. The REDBLACKS kept the ball on the ground with Powell, who got around the edge and found pay dirt to give Ottawa the lead. Ward knocked down the point after to make the score 24-17, giving the REDBLACKS a thrilling victory.

“It’s a big win – I never take winning for granted. It was one of those games that was going back-and-forth. I view us as a 5-3 team that has work to do. In the first half, we were moving the ball well, but we kept turning it over, which is tough. Taking care of the football is key, and we’ll work on it.” – HC Rick Campbell

“I wanted the ball [late in the game]. Coach put it in my hands and we kept it on the ground and fortunately we were able to put it in the end zone. We were moving the ball pretty well, getting a lot of productive yards in the run game and the pass game. We just have to keep the ball in our hands and work on some ball security and we’ll be fine.” RB William Powell

Trevor Harris surpassed 15,000 career passing yards with a 19-yard completion to Diontae Spencer in the first quarter… R.J. Harris’s third quarter touchdown was the first in his CFL career… With his 22 straight field goals without a miss, Ward broke the CFL rookie record for consecutive field goals (held by Luca Congi, 2016). The single-season record for consecutive field goals is 30 (Paul McCallum, 2011) and the all-time record is 39 (Rene Paredes, 2012-13)… The REDBLACKS honoured the 1968 and 1969 Grey Cup champion Ottawa Rough Riders on the field at half-time.