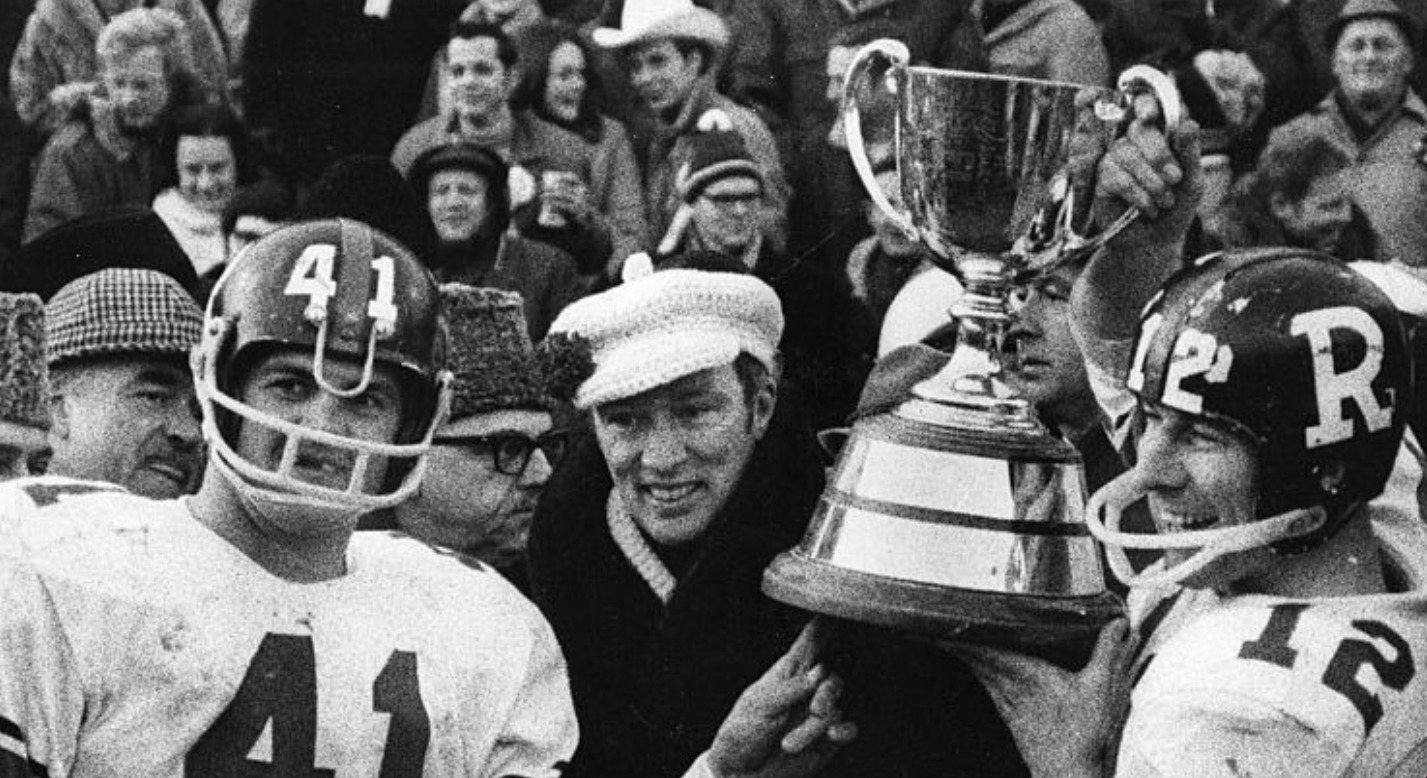 The great great granddaddy of our franchise, Football Club, in Ottawa was founded in 1876, only nine years after confederation. Then in 1898, as a tribute to Teddy Roosevelt’s Rough Riders unit that fought in the Spanish American War, the team name was changed to Ottawa Rough Riders, with the iconic red and black colour scheme. That year, the Rough Riders won their first Canadian Championship.

Ottawa Senators
In 1925 the Rough Riders temporarily changed their nickname to “Senators.” That year they defeated the Winnipeg Tammany 24-1 to win the franchises’ first Grey Cup championship.

The franchise dropped Senators and returned to Rough Riders in 1930.

The Professor
The Ottawa Rough Riders signed legendary head coach Frank Clair in 1956. Clair gained the nickname “The Professor” for his incredible ability to teach players and develop talent combined with his professorial appearance

Clair had an impressive 116-75 record during his 14 seasons on the Ottawa sideline. During his reign, the Rough Riders won three Grey Cups championships in four appearances.

“The Professor” took the franchise to unprecedented heights, he currently holds the CFL record for all-time most playoff wins as a coach.

Clair later went on to become the general manager of the Ottawa franchise from 1970 to 1978. During his time as GM, the Rough Riders won two more Grey Cup championships.

Clair was inducted into the Canadian Football Hall of Fame in 1981. Lansdowne Park stadium, home of the Rough Riders, was renamed Frank Clair Stadium in his honour on April 8, 1993.

Glory Years
In the 1960s, the Rough Riders were a force to be reckoned with. The team made the post-season every year, placed no lower than second in their division and won three Grey Cups.

The team was known for having as much fun on the field as they did off and most players lived and worked in the offseason in Ottawa.

At the 1969 Grey Cup in Montreal, Russ Jackson and the Rough Riders put on one of the team’s most memorable performances.

The Rough Riders found themselves down 9-0 to Saskatchewan early in the game, but the defending champions did not panic.

Jay Roberts scored Ottawa’s first touchdown on an 11-yard run and Ronnie Stewart scampered 80 yards for another TD in the second quarter to give Ottawa a 14-9 lead at the half.

After a Saskatchewan fumble, Jackson hit Jim Mankins for another TD in the 3rd quarter and the Rough Riders sealed their victory when Stewart and Jackson combined on a 32-yard pass and run touchdown that sealed the deal on a 29-11 Ottawa victory.

“In Russ We Trust”
Russ Jackson took over as Rough Riders QB in his rookie season, when Americans Hal Ledyard and Tom Dimitroff were injured. He went on to play 12 seasons with the Rough Riders and remarkably never missed a game because of injury.

Jackson led the Rough Riders to the playoffs every year that he was with them. He completed 1,356 passes for 24,592 yards and 185 touchdowns and was the eastern conference passing leader from 1963 through to 1969.

Under Frank Clair’s tutelage, Jackson became a three-time CFL All-Star, a position normally reserved for American quarterbacks. He took home seven Schenley awards, three for the most outstanding player and four as the top Canadian. In 1963 he was the first player to ever win both Schenley titles in one season.

The Rough Riders legend retired after winning MVP in the 1969 Grey Cup Championship.

At the age of 77, the Hamilton native has been a great supporter of the REDBLACKS franchise and in 2014, Canada Post released a Jackson/REDBLACKS stamp in his honour.

Unlikely Victory
The Rough Riders of the early ’70s were a group of hard-working, fun-loving men who captured one of the most unlikely Grey Cup titles in franchise history.

The 1973 Rough Riders were a team in transition. They had up-and-coming rookies mixed with veterans still remaining from the Clair and Jackson era such as offensive lineman Tom Schuette, Roger Perdrix, and Moe Racine, and star linebackers Jerry “Soupy” Campbell and Wayne Giardino.

Racine, Campbell and Giardino captained the team of misfits. Campbell led a defensive line that allowed just 16.7 points per game. The defensive unit earned themselves the nickname “Capital Punishment” early in the season.

They started the season with an 0-4 record, but completely turned things around and became virtually unstoppable winning 10 of their 11 remaining regular-season games, bringing them from the bottom of their division to the top.

The team gained confidence with every victory. The Rough Riders rode that wave of momentum all the way to the Grey Cup final in Toronto.

The defence, led by Grey Cup MVP Charlie Brandon, forced five fumbles and knocked both Eskimo quarterbacks out of the game. The Rough Riders beat the Eskimos 22-18 to win their 8th Grey Cup victory.

End of an Era
Throughout the 1980s and ’90s, the Rough Riders struggled on the field and off.. The franchise folded in 1996 ending a long-standing history of Rough Riders football in Ottawa.

The CFL returned to Ottawa as the Renegades in 2002 but folded after four unsuccessful seasons.

Homecoming
The Canadian Football League conditionally awarded a franchise to the Ottawa Sports and Entertainment Group (OSEG) in March of 2008. OSEG is a partnership of five Ottawa business and community leaders. The partners; Roger Greenberg, John Ruddy, Jeff Hunt, William Shenkman and John Pugh, each own successful business enterprises and are well-known in Ottawa for distinguished community service.

In June 2010, Ottawa City Council voted to partner with OSEG and proceed with the revitalization of Lansdowne Park, which would serve as the home of the CFL expansion team, the Ottawa REDBLACKS.

OSEG Sports President Jeff Hunt hired Montreal Alouettes Assistant GM Marcel Desjardins as the REDBLACKS’ first General Manager in January 2013. Desjardins began to build the franchise with the 2013 CFL Draft, the CFL Expansion Draft and by appointing Rick Campbell as the team’s first Head Coach. The REDBLACKS roster quickly filled in the offseason with a mix of experienced CFL veterans that included free agent QB Henry Burris and rookies from all over North America.

The REDBLACKS made their CFL debut on July 3, 2014, in Winnipeg. Running back Chevon Walker scored the franchise’s first touchdown early in the first quarter.

The new TD Place Stadium at Lansdowne hosted the REDBLACKS’ first home game against the Toronto Argonauts on July 18, 2014.