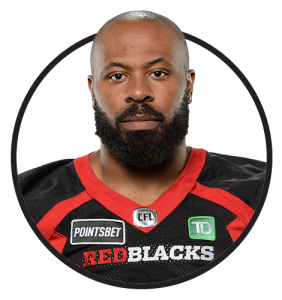 ACQUIRED: Signed with the Riders as a free agent in February 2019.

YEARS WITH THE RIDERS: 2

PRO: Signed with the Ottawa Redblacks in September 2015 after spending time with the NFL’s Detroit Lions, Houston Texans and Philadelphia Eagles.  He entered the NFL after signing with the Arizona Cardinals as an undrafted free agent in May 2011. In 2019, Powell started in 18 regular-season games recording 215 carries for 1093 yards and 12 touchdowns, added 37 catches for 296 yards and two touchdowns and recorded three 100-yard rushing games. Powell started in the Western Final and had eight carries for 48 yards and three catches for 52 yards.

COLLEGE: Played two seasons at Kansas State (2009-10) playing in 15 career collegiate games.  As a Wildcat, Powell had 23 carries for 250 yards and four touchdowns, added one reception for five yards.  He spent two seasons at Navarro Junior College from 2007-08.