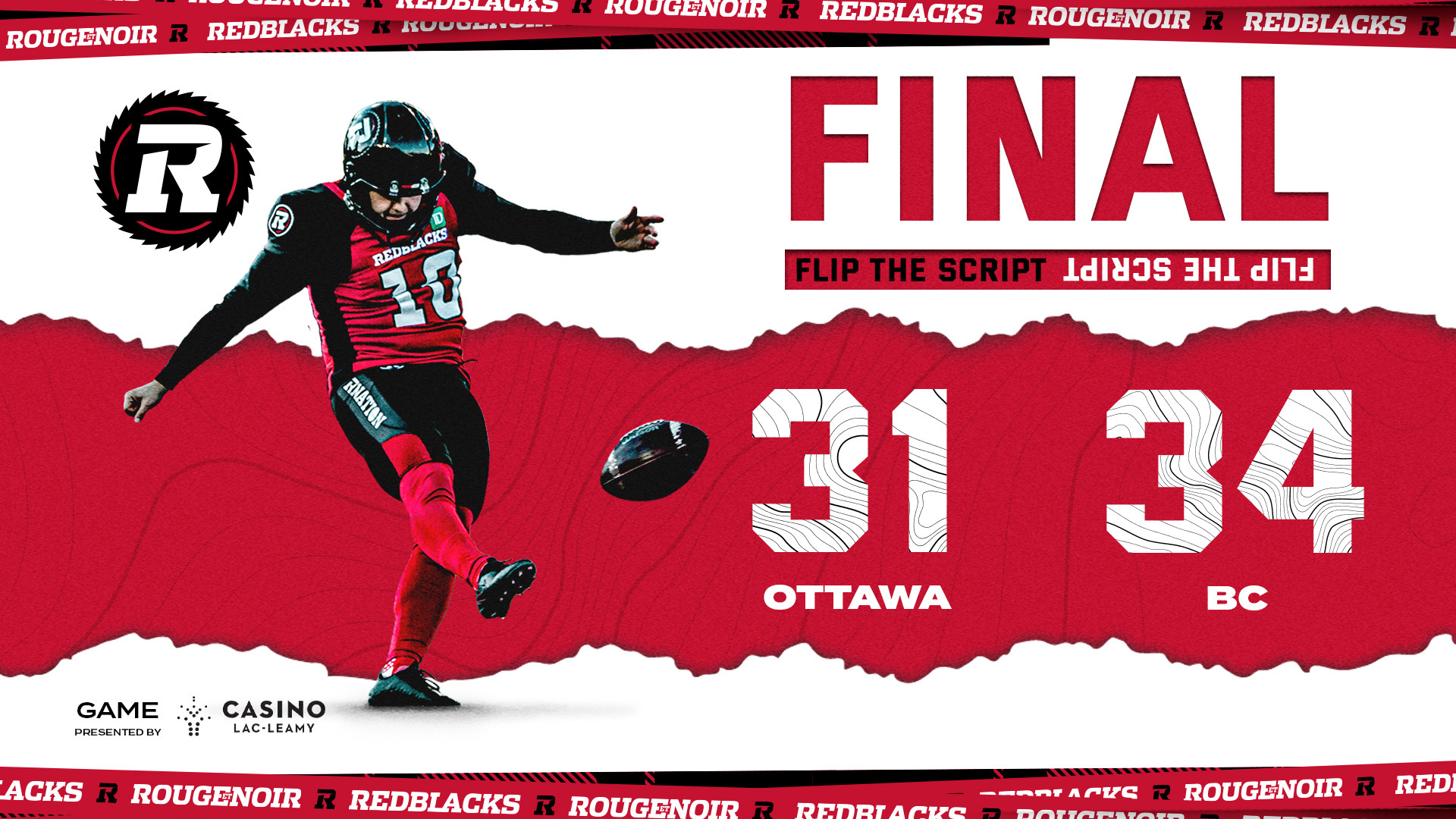 The Ottawa REDBLACKS are no doubt getting closer, but came just shy of their first win of the season, falling 34-31 to the BC Lions at TD Place.

Money Hunter was the star of the show, picking off upstart quarterback Nathan Rourke twice, while also recovering a fumble. The REDBLACKS turned in four rushing touchdowns; courtesy of a pair from Caleb Evans, as well as scores by William Powell, and Jeremiah Masoli.

The Lions got out to an early lead, when Rourke broke free for a 50-yard touchdown run on third and short, just over four minutes in.

A late quarter drive, engineered by big runs from Powell, and Terry Williams, extended into the second quarter’s opening minutes. Lewis Ward capped it off with a 35-yard field goal, and the REDBLACKS cut the lead to 7-3.

Another Ward field goal made it a 14-6 game, going into the second half, but the REDBLACKS — in their uniforms — came out of the gates red-hot.

Hunter nabbed his first of two picks on the night from Rourke, and Powell crashed home for a five-yard touchdown run. Evans converted on a quarterback sneak for the two-point conversion, and Ottawa tied the game at 14-14.

On the very next series, Hunter again picked off the Lions quarterback, and ran the ball down to the BC seven-yard line. Following a six-yard run by Masoli, the REDBLACKS quarterback snuck in a touchdown of his own, but Ottawa couldn’t convert on the point after try, and settled for a 20-14 lead.

It was short-lived, however, with Keon Hatcher breaking free down the field, and Rourke connecting with him for a 71-yard touchdown pass. Sean Whyte converted on the extra point, and the Lions held a one-point advantage.

BC kept the momentum rolling, thanks to a James Butler touchdown run, and the REDBLACKS found themselves trailing 28-20 heading into the fourth quarter.

On the Lions’ next possession, Justin Howell forced a fumble, and Hunter was credited with a recovery for knocking the ball out of bounds. Ward knocked through a field goal to cut the deficit to five, but not long after, a controversial major foul call on Ottawa saw the Lions cruise into field goal range, and take an eight-point lead once more.

Whyte’s final field goal of the night made it 34-23, but the REDBLACKS mounted a furious comeback in the game’s final minute. Masoli threw deep to the endzone for Darvin Adams, drawing a pass interference call, and Evans snuck in a touchdown from the one-yard line. Adams made good on a two-point catch, cutting the lead to three, but an Ottawa onside kick attempt was for naught, and the REDBLACKS fell 34-31.

UP NEXT: The REDBLACKS are back on the road, taking on the Saskatchewan Roughriders next Friday, July 8, at 9:30pm ET.