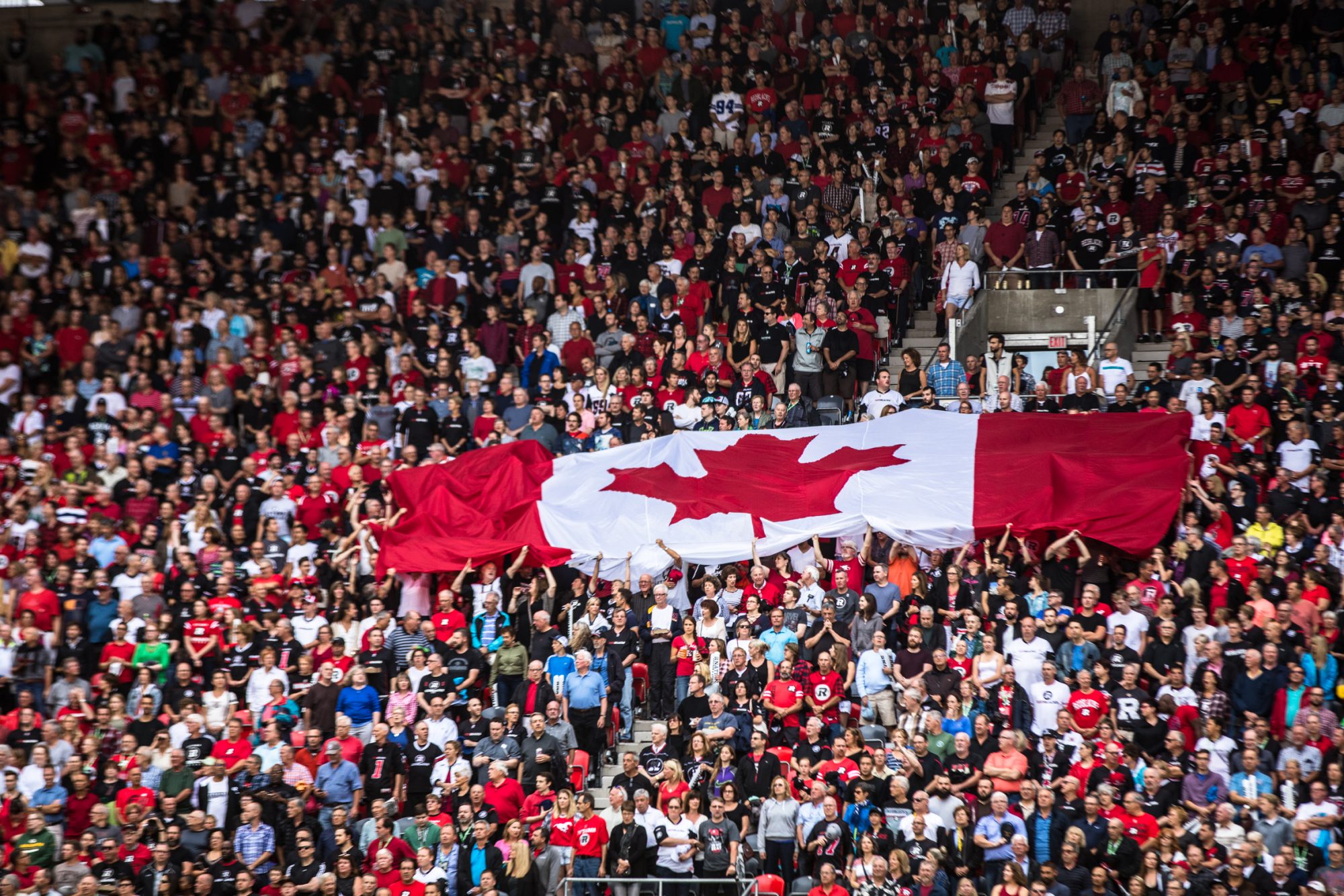 If nothing else, the Canadian Football League is uniquely Canadian.

Played in the beautiful heat of a northern summer, the CFL’s special set of distinctions from its American counterparts have forged an identity unlike anything seen in other professional leagues. Perhaps most Canadian of all, the league relies on players flocking to the Great White North from across the globe to strap on the pads, and make the CFL what it is.

Though myriad Americans find their way to the CFL, along with the more recently-implemented Global players, a large part of the league’s charm lies within its Canadian contingent of players, and that unique appreciation is always felt a little more around the beginning of July.

The Ottawa REDBLACKS’ June 30 matchup with the BC Lions will be marked by a celebration of Canada Day festivities, and though a day early, fans can expect a party under the lights at TD Place, Thursday night.

With the REDBLACKS donning their red jerseys, and fans encouraged to wear red of their own, combined with live music and post-game fireworks, the showdown with the Lions promises perhaps a little more excitement than the fever pitch commonly associated with TD Place.

It’s an atmosphere that the players are looking forward to experiencing.

“It’s easy to feed off the crowd’s energy in a game like that,” said receiver Nate Behar. “It’s part of one of the best celebrations in a beautiful capital city. It’s going to be a blast.”

Behar, 27, is no stranger to the celebratory aura around Ottawa. After a standout career with the Carleton Ravens, and two years in Edmonton, Behar is in the midst of his third season with the REDBLACKS. The London, Ontario native has recorded 63 catches for 749 yards through 33 games.

That said, Behar’s games with the Ravens were played in the fall, and this will be the first contest in his CFL career played in such close proximity to Canada Day, much less with the REDBLACKS.

“To get to represent this country, and to play a game this country loves, and do it in front of the ones you love is amazing,” Behar said. “When everyone’s excited and full of joy, it’s just a big old party.”

Behar confirms that the players feel the energy that RNation brings, in games such as this.

‘That’s fun. Especially as a receiver, you kind of feed off that. You get to celebrate when you make plays.”

Though Behar and his fellow Canadians will be feeling that extra boost when they take to the field for the REDBLACKS’ Canada Day game, they won’t be the only ones soaking up the buzz around the stadium.

Roughly half of the league’s players are American, and in true Canadian fashion, it’s created a mosaic of football talent. On a personal level, though, most American players find themselves taking to life in Canada, and many of them spend considerable time in their Canadian cities during the offseason.

Some, of course, develop a special connection to their communities.

Ask anyone around Lansdowne about REDBLACKS defensive back Sherrod Baltimore, and they’ll likely respond with a smile, and a great story about an interaction with the man who has come to be known as “The Mayor of TD Place”.

Despite hailing from Fort Washington, Maryland, Baltimore has become engrained in the Ottawa community through five seasons with the REDBLACKS. Sure, 117 tackles, two interceptions, and a forced fumble in 49 career games are impressive on the face of it, but the 29 year-old’s dedication to enriching the nation’s capital have made him even more beloved.

In fact, right before Ottawa’s 2022 training camp kicked off, Baltimore hosted a free football development camp for kids aged 6-18, on the iconic turf of TD Place.

As he’s become something of an honorary Canadian, Baltimore has developed a special appreciation for Canada’s national celebration. Perhaps it’s an affinity partially fostered by his own personal success in games near Canada Day. In one such instance back in 2019, against the Winnipeg Blue Bombers, he recorded three tackles and a forced fumble.

“The atmosphere around Canada Day games is amazing,” said the veteran defensive back. “It reminds me of the Fourth of July.”

Of course, it’s only fitting that the man who always has a smile on his face is looking forward to the stereotypical, cheery Canadian spirit, too.

“Everyone is going to be outside, happy, and ready to see a show and some fireworks.”

RNation can certainly expect fireworks when toe finally meets leather between the REDBLACKS and Lions on Thursday. With a sea of red in the crowd, and a raucous atmosphere on Bank Street, it’s a party that fans won’t want to miss.