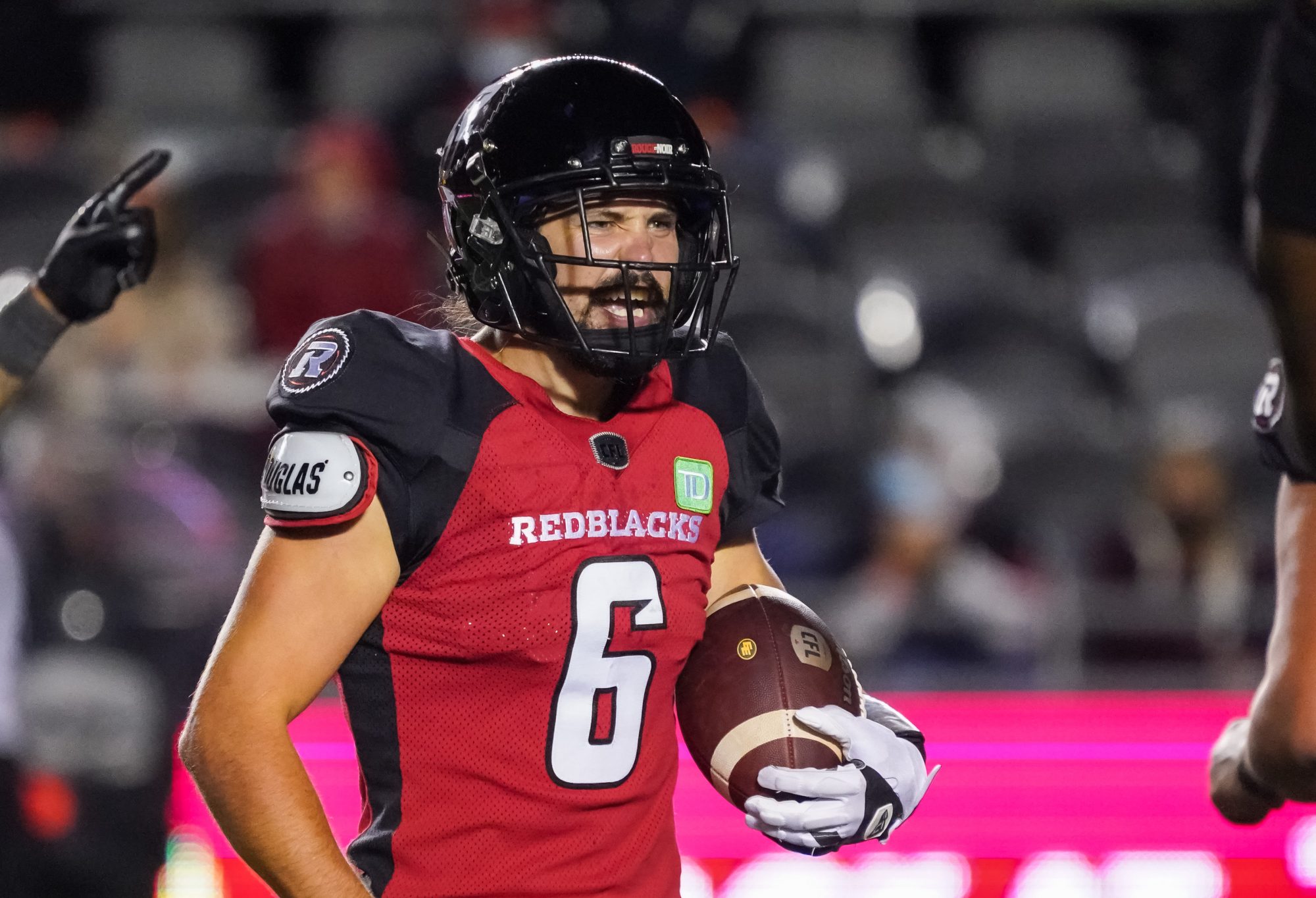 When the Ottawa REDBLACKS faced off against the Edmonton Elks last Tuesday night, it was a special evening at TD Place for a variety of reasons. Of course, winning is always nice, and it was rookie quarterback Caleb Evans’ first victory in his first professional start, but while his career is just beginning, a lifelong member of the REDBLACKS reached a major milestone.

Safety Antoine Pruneau not only chipped in on the box score, but the 31 year-old also suited up for his 100th career CFL game.

After a decorated collegiate career with the Université de Montréal Carabins, Pruneau first caught the attention of the Ottawa REDBLACKS in 2014, with his blinding speed.

“Antoine runs a 4.3 in the 40 (meters) and those guys are hard to find at any level of football – major NCAA, CIS, CFL and even the NFL,” REDBLACKS general manager Marcel Desjardins said at the time.

The speed demonstrated by the Laval native was similar to that with which the REDBLACKS made Pruneau their first ever draft selection, at fourth overall in that year’s CFL Draft. Looking to forge their identity as the league’s newest team, the REDBLACKS were not only looking for impact players on the field, but leaders off of it: franchise cornerstones that they could build around.

They got all of that and more in Pruneau.

In his rookie season with the REDBLACKS, Pruneau stood out on both defence and special teams. Suiting up in all 18 games that season, he recorded 79 total tackles, finishing second on the team. Pruneau also chipped in two sacks, as well as a forced fumble, and it wasn’t just his own team taking note of his stellar play. He earned CFL Canadian Player of the Month honours for October and was nominated by the REDBLACKS for the league’s Most Outstanding Rookie award.

2015 yielded more of the same for Pruneau, who recorded another 70 tackles through 18 games. He also continued to help his team in the turnover department, snatching two interceptions — including the first of his career against the Montréal Alouettes in Week 7, in front of a jam-packed crowd at TD Place — as well as a forced fumble. Pruneau also made 16 tackles throughout his first three postseason games, on the REDBLACKS’ run to an appearance in the 103rd Grey Cup game.

On a mission to return to the championship game, and eyeing a better result in 2016, Pruneau was again a key component of what would become a storied REDBLACKS team. In 17 games of action, he racked up another 69 tackles, along with a sack, and an interception. He again carried his strong performance into the playoffs and tallied 12 tackles through three games, including six in the 104th Grey Cup against the Calgary Stampeders. In just their third season, the REDBLACKS, earned a dramatic 39-33 victory, winning their first Grey Cup in franchise history.

Though 2017 didn’t yield quite the same results in terms of team success, Pruneau had a career year for the REDBLACKS, after signing an extension with the team during the offseason. He recorded 73 tackles, along with a career-high four interceptions — bringing one back for his first career touchdown, against the Saskatchewan Roughriders — as well as a sack.

Due to injuries, Pruneau only appeared in 22 games from 2018 through 2019, but didn’t see his production suffer during the time he was healthy. Across that span, he made 86 tackles, caught two interceptions, and two forced fumbles. By this point a core member of the REDBLACKS defence, Pruneau was awarded a three-year contract extension in 2018.

With the CFL returning from the COVID-19 pandemic in 2021, Pruneau has picked up right where he left off. In seven games during the year, he’s tallied 28 tackles, bringing leadership to a young team that has dealt with its fair share of ups and downs. It was only fitting, then, that Pruneau would cap off his 100th career CFL game in style.

In the REDBLACKS’ Week 9 showdown with the Edmonton Elks, Pruneau recorded four tackles and recovered a key fumble early in the game to help his team carve out an early lead. Of course, who else but Pruneau — a REDBLACKS star since Day One —could possibly cap off the thrilling 34-24 win with a late-game interception?

To this point, it has been a storied 100-game career for the REDBLACKS safety. One can only wonder with excitement what the next 100 may bring.