Timothy Flanders Wants You To Listen 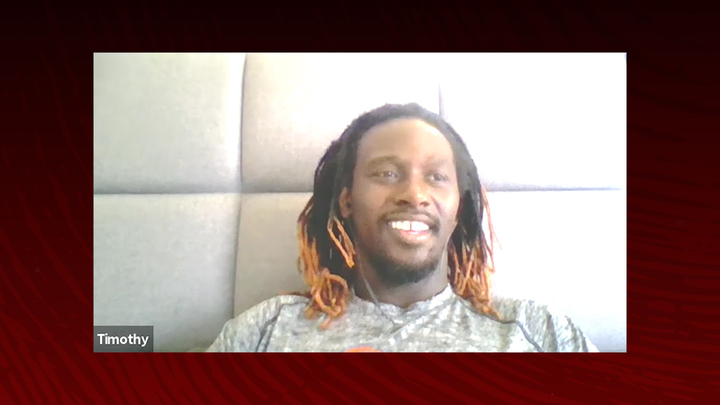 Timothy Flanders Wants You To Listen

Timothy Flanders is supposed to be in Ottawa right now, preparing to face the visiting Toronto Argonauts on Friday night in his first game as a REDBLACK.

Instead, the 28-year-old running back is home in Texas, staying ready for an eventual season, living according to pandemic rules and, most importantly, being an active voice against racism and police brutality.

Flanders, Oklahoma-born and a product of Sam Houston State University, signed a one-year deal with Ottawa on December 27 after parts of three seasons with the Winnipeg Blue Bombers. A little less than two months later, North America, along with much of the world, shut down because of the Covid-19 crisis. Roughly two months after that, George Floyd died while being detained by police. The officer who was seen kneeling on Floyd’s neck during the eight-minute video has been charged with his murder, the other officers as accomplices. Floyd’s death put a global spotlight on systemic racism and police brutality, providing a bigger platform to many long-ignored voices.

Flanders, like many of his teammates and fellow players in the CFL, have seized the opportunity to speak up and out, pleading for people to listen and gain a better understanding of the injustices black people experience everywhere, including in Canada.

While his voice is proudly out there – including regular tweets and an appearance on a video complied by James Wilder Jr. of the Montreal Alouettes in which players from across the league speaks up to condemn racism and police brutality – Flanders said it does wear on him.

“It is tiring (but) I’m doing better than before,” he says. “We shouldn’t be at this point right now; this should have been taken care of a while ago. The difference now is more stuff is getting recorded, it makes it easier for people to see what’s going on. But people are responding and protesting; I feel that will help the situation.”

Flanders points out it’s not just the most obvious acts of racism that need to be educated out of society, but the more micro acts that demean someone because of their race. 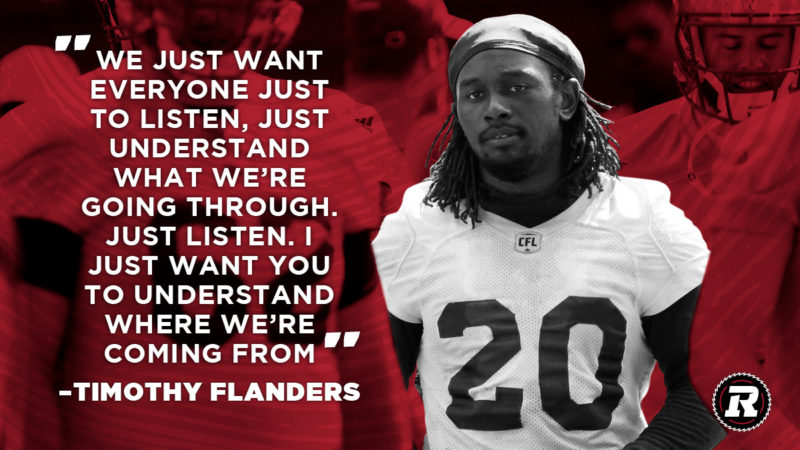 “Sometimes it’s just walking into a place and people just try to treat you better to make you feel comfortable,” he says. “Treat me like everyone else in here. I’m just like him, I’m just like her. Don’t try to raise the bar because I walked into the room.”

On the subject of racism in Canada, Flanders thinks this is an important learning opportunity.

“Canada is seeing what’s really going on,” he says. “I don’t think they have the problem as much as we do in the States; I don’t think their cops are just shooting unarmed black men over and over.

“But racism is everywhere. There will be change in Canada too. People are protesting all over the world.”

The tiring part, he explains, is that while people are paying attention today, it’s nothing new for the people that have been subject to racism for generations.

“This has been happening, this stuff has been going on. It’s not too late, but at the time we’ve been trying to tell people this and they didn’t want to see it or believe it.”

Flanders, the father of a young son, also has to figure out how to put these problems into words that his child can digest.

“How do you explain that to your kid? I had to explain it to him the other day. I’m hard on my son but I tell him that the only reason I’m hard on you is because I love you so much. The world isn’t going to care; they aren’t going to love you like I do.”

Bottom line: “We just want everyone just to listen, just understand what we’re going through. Just listen, I’m open. I just want you to understand where we’re coming from.”

While acknowledging there are many more important things going on in the world than sports right now, Flanders tweeted a football thought earlier this week.

“Today should have been Day 1,” he wrote, referencing the first full practice day of a game week.

Flanders, who was a guest during the REDBLACKS Virtual Home Opener last Friday night, said it’s tough not being around his new teammates and coaches, many of whom he is already familiar with.

“Getting ready for Friday Night Lights, just being around the guys and going through the process,” he says. “That’s the best part of it all.” 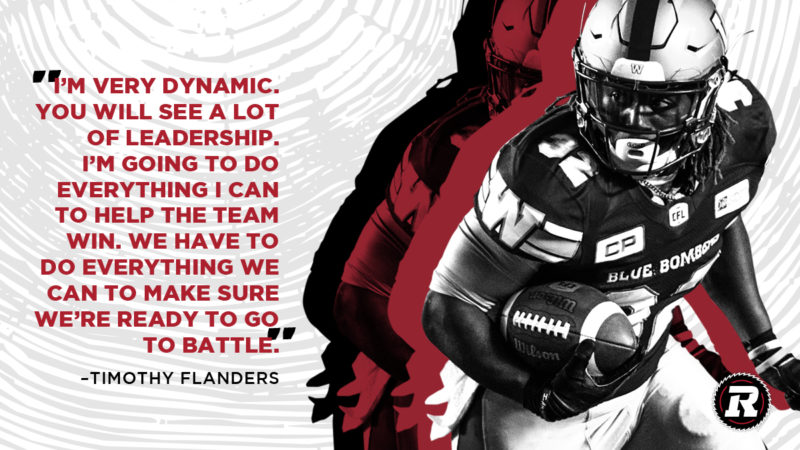 As for who he already knows coming into his new Ottawa home, it starts with Head Coach Paul LaPolice, who was Blue Bombers offensive coordinator when Flanders was in Calgary. After getting released from Calgary’s practice roster late last season, Flanders heard from LaPolice soon after the latter signed on as the second head coach in REDBLACKS history.

“Coach LaPo said, ‘if we have a contract for you, are you willing to come play for me?’” Flanders explains, adding the decision to sign with the REDBLACKS was “pretty easy.”

Fellow running back John Crockett was a college rival of Flanders – “we played against each other in two national championship games” – and he knows quarterback Nick Arbuckle from his stop with the Stampeders (“He helped me out a lot in Calgary,” he says). He also knows quarterback Dominique Davis from their time spent together in Winnipeg.