Morris: Revenge not on Jennings’ mind vs. Lions 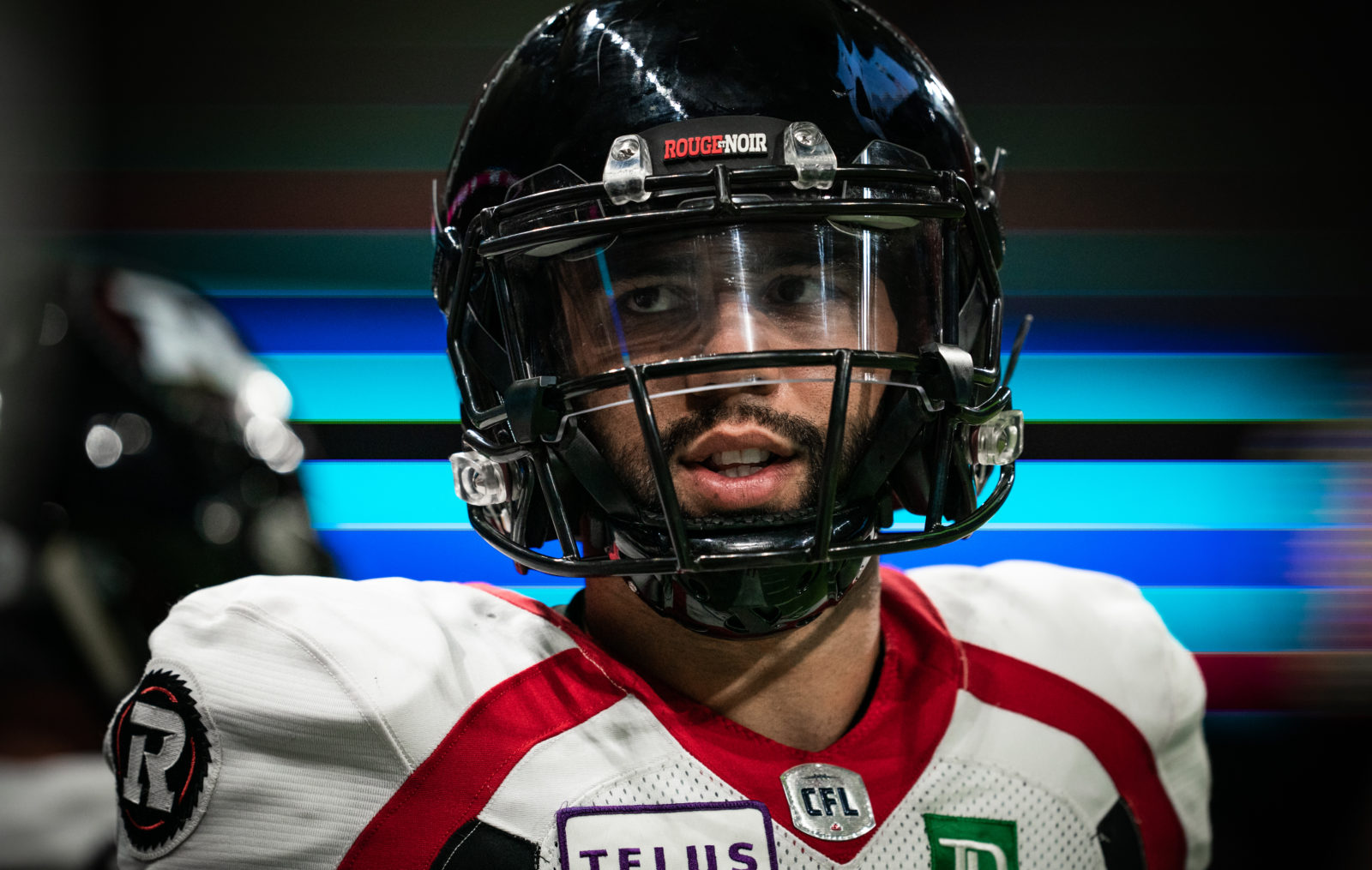 Morris: Revenge not on Jennings’ mind vs. Lions

It was losing that bothered Jonathon Jennings the most, not who the Ottawa REDBLACKS lost against.

Jennings was frustrated that Ottawa’s lopsided 29-5 defeat at the hands of the BC Lions last week was the REDBLACKS’ fifth consecutive loss. He also wasn’t happy with his own performance. What he didn’t care about – or at least said he didn’t care – was the loss came against his old team.

“It’s not about me,” Jennings said in a somber Ottawa dressing room. “It’s just frustrating that we are losing. It’s not about me coming back here. I want to win any game we play. It’s bitter that we’ve been on this losing streak.”

The previous day, after the REDBLACKS brief practice at BC Place Stadium, Jennings talked about the fond memories he had of playing in Vancouver.

“I was fortunate to have a great time in BC, I learned a lot,” said the 27-year-old who signed with Ottawa as a free agent in February after four years with the Lions. “I met a lot of great people, formed a lot of good relationships. I was very blessed and fortunate I got to spend that time here.” 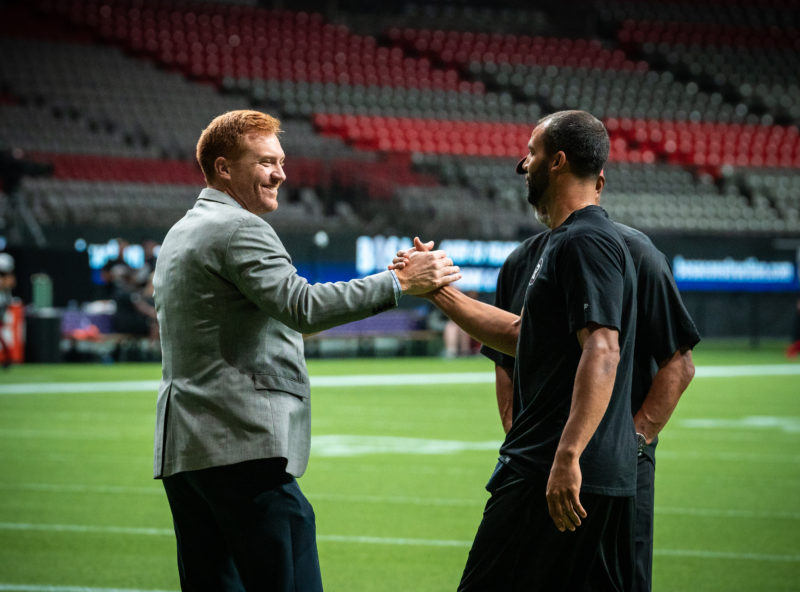 He downplayed any suggestion there was anything personal in playing the Lions.

“I’m not going to make any story, there’s no story to it,” he said.

With their roster riddled with injuries the REDBLACKS needed their quarterback to step up against the Lions. Instead, Jennings looked pedestrian. He completed 19 of 31 passes for 239 yards and two interceptions. He also ran eight times for 31 yards.

It wasn’t all his fault. Jennings was sacked four times and there were a couple of dropped balls. But he also threw into coverage and at times looked confused.

“I know there are a bunch of other guys that need to help him more.”

Jennings has had a meteoric CFL career. He burst into the league with a flash in 2015 and looked destined to be the next bright star but that promise has faded.

A third-string quarterback in 2015, Jennings was forced into the starter’s role following injuries to Travis Lulay and John Beck. He won three of his six starts and finished the year completing 142 of 215 passes for 2,004 yards, 15 touchdowns and 10 interceptions.

Jennings had a breakout season in 2016. He completed 371 of 554 passes for 5,226 yards, 27 touchdowns and 15 interceptions as the Lions finished second in the West with a 12-6 record. In the Western Semi-Final Jennings led the Lions back from a 19-point deficit by throwing for 329 yards and two touchdowns. He also scored the winning touchdown on a nine-yard run late in the game.

Jennings’ decline began in 2017. He missed three games with a separated shoulder and ended the year with just over 3,600 yards, 16 touchdowns and 19 interceptions.

The injury had lingering effects.

“It was tough,” said Jennings. “I think the biggest thing that nobody realized it affected my accuracy big time. That changed a lot of things. It caused me to turn the ball over a little more than I wanted to based on me missing throws a lot. It changed the way I threw and that kind of hurt me big time.”

Both fans and members of the Lions coaching staff were sometimes mystified by some of Jennings decisions on the field. He would throw balls into coverage or opposite to where the play was designed.

“It was tough,” he said. “If you look at anyone’s career there’s moments where things were a grind, whether it be injury or the team not doing very well or you’re not having very much success yourself.

Instead of being bitter Jennings considers his time in BC a learning experience. 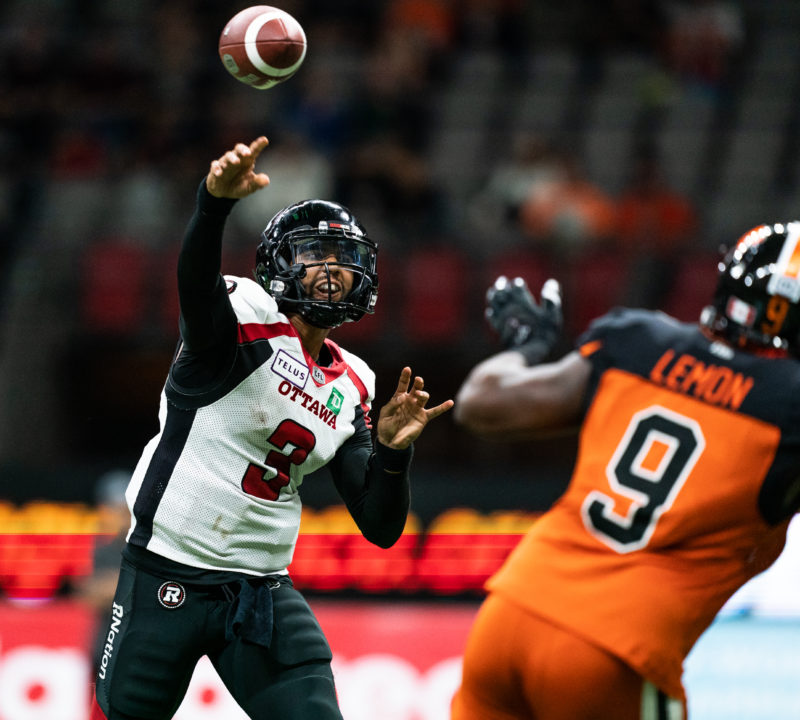 The move to Ottawa has resulted in changes for Jennings both on and off the field.

His wife gave birth to a baby girl on Sept. 2.

He began the year as the backup to Dominique Davis but has started the last two games. In six games Jennings has completed 91 of 138 passes for 975 yards, three touchdowns and six interceptions.

Always cordial in his dealings with the media, Jennings didn’t want to discuss if Ottawa is a second chance.

“I don’t like putting a story to all these scenarios,” Jennings said.

“It’s football. I have to go out there and play football just like everybody else does. We have a job to do. We have to take care of that task. I’m just excited to be on the field.”

The REDBLACKS (3-9) face BC (2-10) again Saturday in a rematch at TD Place Stadium. Some trash talking by the Lions last game has given Ottawa extra motivation.

“Those guys were talking a little bit,” Jennings said. “This just kind of ticks everybody off. That’s motivation to go out here and find a way to compete a little bit harder.”

Simply being motivated won’t be enough.

“We have to stop having so many missed assignments, that’s each and every one of us,” said Jennings. “It starts with me. We have to make sure we find a way to be cleaner in our reads and our assignments.

“After that it’s about competing. We have to make plays. Sometimes you’ve just got to beat somebody. We have to find a way to get that done.”