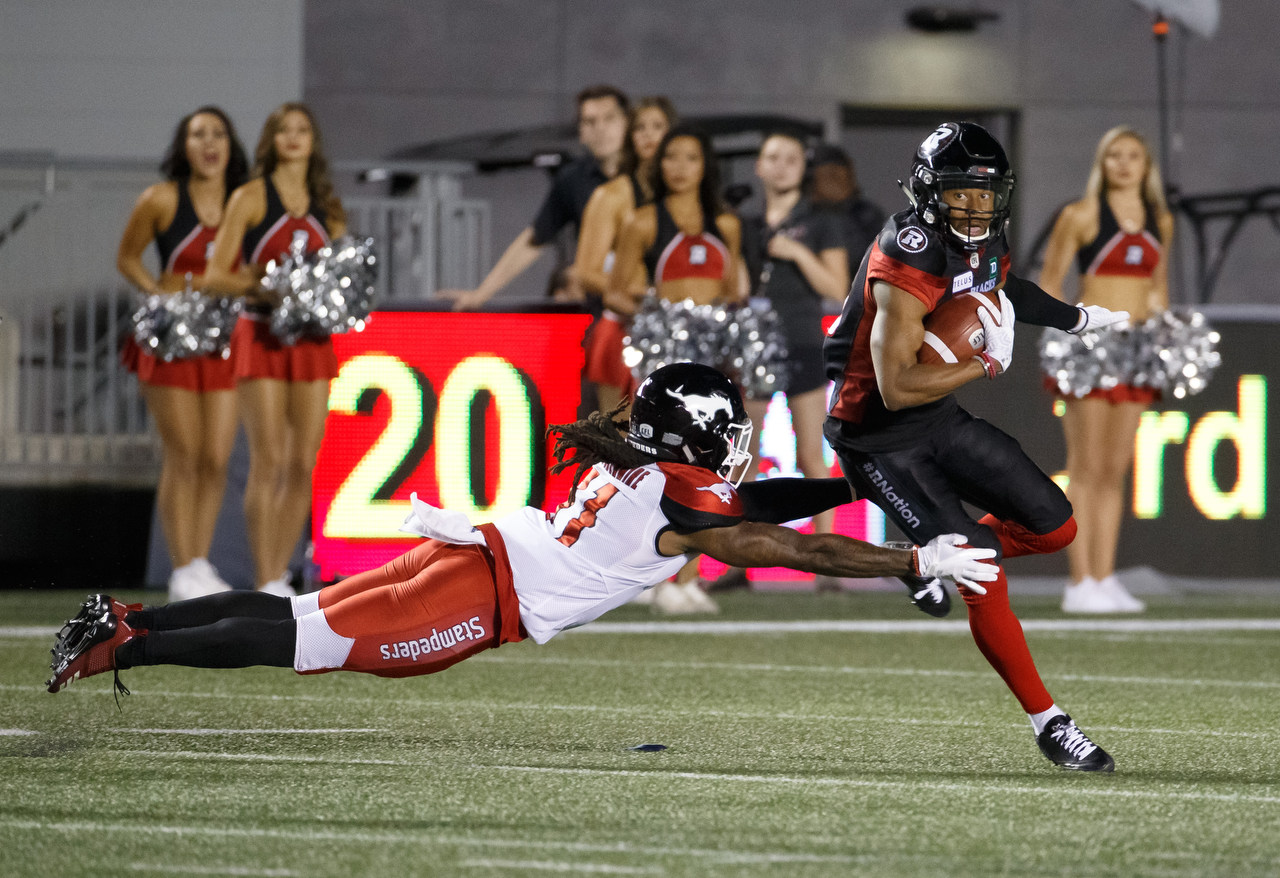 The REDBLACKS dropped a tough 27-3 decision to the first-place Calgary Stampeders on Thursday night.

The Stampeders got on the board early as they moved the ball before Romar Morris punched it in from short range. A two-point convert gave the Stampeders an 8-0 lead to close out the first 15.

The Stamps offence looked dangerous early on, but the REDBLACKS defence was holding them at bay. A.C. Leonard recorded his first sack of the season when he took down Bo Levi Mitchell.

With the REDBLACKS offence struggling to move the ball early in the second quarter, Calgary started winning the field position battle. The Stamps took over and Mitchell guided them into the red zone, where receiver Juwan Brescacin jogged into the end zone. The REDBLACKS defence stood tall and stifled the two-point conversion attempt.

Calgary was forced to make a quarterback change in this one as Mitchell left the game with an apparent lower-body injury. Rookie Nick Arbuckle took over at quarterback, making his first career appearance. The first half ended 20-0 for the visitors.

Trevor Harris and the offence came out firing on all cylinders to start the second half. Harris completed five-straight passes taking the REDBLACKS down to the goal line in the blink of an eye. Ottawa had to settle for a field goal, cutting the score to 20-3.

The defences made life difficult for the offences, and that was the only scoring in the third quarter.

Calgary running back Don Jackson broke the defensive struggle with ten minutes to go in the fourth quarter. Jackson dashed 48 yards into the red zone, and Arbuckle connected with Lamar Durant, making the score 27-3.

REDBLACKS quarterback Danny Collins got his first action of the season as time wound down in this one. The 24-year-old impressed, gaining 53 all-purpose yards, but couldn’t find the end zone as the Stampeders rode out 27-3 winners.

The REDBLACKS (2-2) will try to return to the win column next week when they face the B.C. Lions at TD Place on Friday, July 20 at 7:30 p.m. Ottawa beat the Lions in both of their meetings last season, but both were hotly contested matchups. The Stampeders (4-0) remain the league’s only undefeated team and will take on the Montreal Alouettes in Calgary on Saturday, July 21.

“We got flat out beat in all ways – offence, defence and special teams. We never found a way to respond, never found a rhythm and never found a spark. We needed something to happen to do that and we just didn’t do it. It wasn’t good enough. We’re going to be in here tomorrow with the players watching it.” – HC Rick Campbell

“Everybody has to be better. You can’t point the finger at one guy, but if you need to, you can point it at me. They kicked our butts. We just weren’t good enough. We’ll watch the film and find out where we can be better because there’s obviously a tone of places. We’ve just got to move on from this and flush it. We have to learn from it and move on.” – QB Trevor Harris