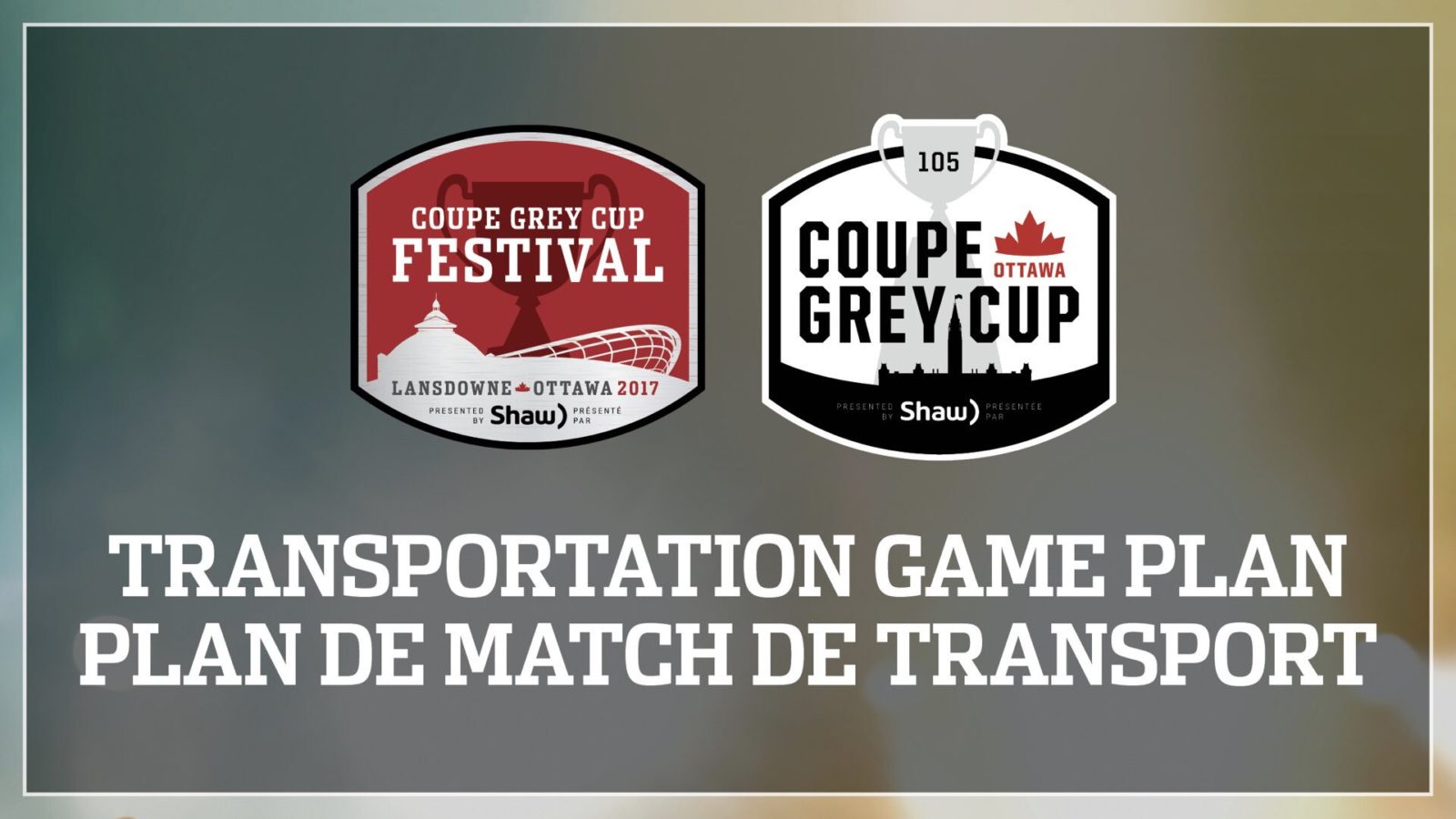 “We’re excited and we’re ready,” said Bernie Ashe, CEO of the Ottawa Sports and Entertainment Group. “Since Lansdowne re-opened to the public in July of 2014, we’ve worked closely with the City of Ottawa, OC Transpo, STO in Gatineau, Canada Post and community groups to ensure visitors have a quick and safe commute to and from the site.  The Grey Cup and Grey Cup Festival transportation plan has been built on that foundation of successful partnerships.”

The Transportation Plan takes effect on Wednesday, November 22 running through Grey Cup game day on Sunday, November 26, until Grey Cup visitors return home on Monday, November 27. Transit throughout the Grey Cup Festival will be free on all OC Transpo and STO routes to anyone with a Grey Cup game ticket and will also be free for Grey Cup Festival event goers for three hours before and three hours following their festival event. There will also be a free shuttle service running November 23-25 running from TD Place/Lansdowne to the Downtown Zone ending at the Shaw Centre.

On game day, transit is free on all OC Transpo and STO Routes to ticket holders. The 450 series (OC) and 800/850 series (STO) will be free from2pm through to midnight and the traditional TD Place Park and Shuttle service will run out of Canada Post, Vincent Massey and City Hall from noon through midnight for Grey Cup ticket holders.Curb side drop-off and pick-up will be accommodated on Fifth Avenue (east of Bank Street) and bicycle parking is available at both the Sunnyside Library and Sylvia Holden Park.

Road closures will be limited to game day starting early afternoon on Bank Street which will be fully closed by 2:00p.m. between Fifth Avenue and Sunnyside Avenue. Further to the closures on Bank, the southbound curb lane between Highway 417 and Lansdowne and the northbound curb lane between Riverdale and Lansdowne will serve as transit only lanes that will also come into effect during the early afternoon of November 26. Bank Street is expected to be fully opened by 11:30 p.m.

“The main message on game day is DON’T DRIVE TO LANSDOWNE,” added Ashe. “Bus, shuttle, bike, walk, get dropped off – there are numerous transportation options available. We are prepared for every ticket holder to get down to Lansdowne and enjoy this party!”

OSEG released the following ‘Game Plan’ to get down to Lansdowne for the 105th Grey Cup and Grey Cup Festival. All information on transportation options are available at GreyCupFestival105.ca.


The excitement will begin on November 21 when the Grey Cup arrives in the nation’s capital to kick-off the Grey Cup Festival presented by Shaw. The week-long festival will feature more than 30 free and ticketed events – headlined by the Grey Cup Festival Concert Series presented by TD, 2017 Shaw CFL Awards and Rev-Up Party, Nissan Titan Street Festival, Gridiron Gals event, Family Fun Zone and the ever-popular RNation Party – offering something for everyone.