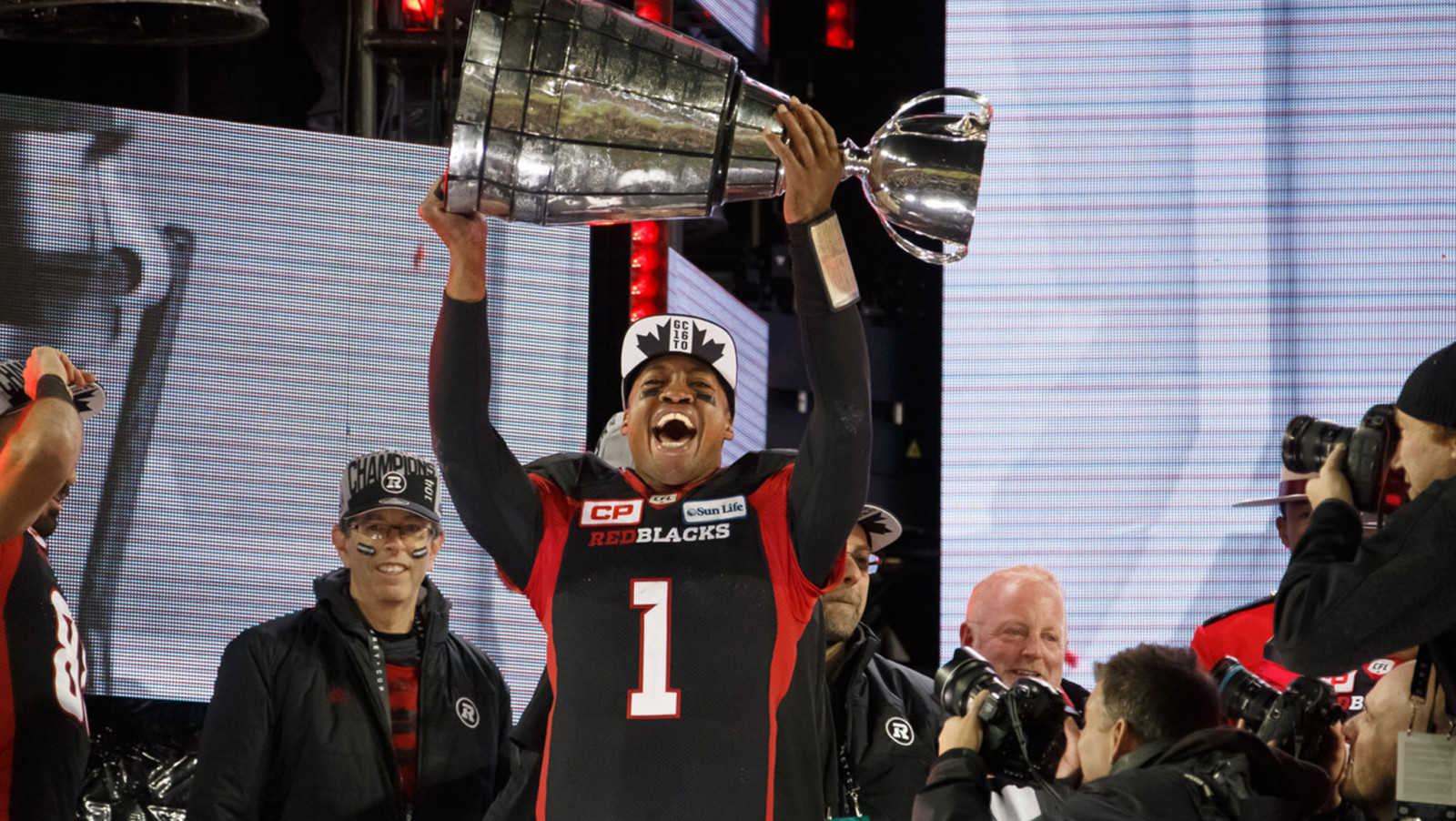 The Ottawa REDBLACKS are Grey Cup Champions. Nearly 40 years ago to the day that an Ottawa football franchise (the Ottawa Rough Riders) last won a Grey Cup, it was a nail-biting 39-33 overtime triumph over the Calgary Stampeders at BMO Field to claim the REDBLACKS as victors of the 104th Grey Cup. It’s the REDBLACKS first Grey Cup in franchise history and it comes in just the team’s third season in the league.

“It feels great. It’s a big night,” said REDBLACKS Head Coach Rick Campbell. “I’m extremely proud of all of the REDBLACKS, the whole organization and the fans. It’s really second to none. When I had the opportunity to interview, I am glad my instincts were correct. I thought Ottawa could be something special and it is in every sense of the word.”

41-year old Henry Burris was named the championship game’s Most Valuable Player after putting in a legendary performance. The veteran QB completed 35 of 46 passes for a total of 461 yards and three touchdowns. His 461 passing yards is the fourth most in Grey Cup history. Burris also accomplished the feat while playing on an injured knee.

“It was a crazy situation,” said Burris about the injury he picked up during warm-up. “As I’m jogging back to the huddle to meet the guys, all of a sudden I felt a crunch-pop and my knee felt like it just kind of went unstable or buckled on me.”

“I was like please don’t tell me this is happening right now,” added Burris.

Following the warm-up, the REDBLACKS medical team went to work on the quarterback’s knee, adjusted his brace and made it comfortable enough to play on, allowing the veteran QB to take the field and lead his team to victory.

The win in Toronto mark’s Burris’ third Grey Cup title and the veteran QB said this one was “hands down the best one ever.”

“What we pulled off here tonight, is something that a lot of people never gave us an opportunity to do. But those guys in that locker room – and our city – we always believe. We never stop believing,” said Burris.

First Half Summary
After Calgary failed to make ground on their opening possession of the game, Burris took to field and led his team on a 10-play, 66-yard scoring drive. Ellingson played a key role on the drive, making two 21-yard receptions and drawing a receiver interference penalty to secure the scoring field position. Burris carried the ball across the end zone for the 1-yard TD rush.

The Stampeders wasted little time to answer. Quarterback Bo Levi Mitchell passed his team down field in 4-plays, covering 79 yards – including a monter 51-yard pass to receiver Marquay McDaniel. Running back Jerome Messam finished of the drive with a 7-yard, over-the-shoulder TD reception.

Ottawa extended their lead midway through the second quarter courtesy of some dynamic team play and a special teams forced fumble. After failing to make any headway on their initial possession, Ray Early came on to punt the football.

Calgary returner Roy Finch received the punt and attempted to punch a hole down the middle of the field, only to fumble the football after being tackled hard by two REDBLACKS players. Serderius Bryant recovered the football at the Calgary 46-yard line. Recognizing an opportunity to exploit, Burris led his team on a 5-play, 46-yard drive capped off by a 6-yard TD pass to Patrick Lavoie, 17-7.

Ottawa was unlucky not to extend their lead by another touchdown late in the second half. After Jeff Richards picked off Mitchell’s wayward pass, Burris took the field and led his team on an 11-play, 84-yard drive that looked destined to end in a touchdown. However, the underdogs simply ran out of time as the half drew to a close, settling for a 29-yard field goal by Ray Early. Heading into halftime, the REDBLACKS led the Stampeders by a score of 20-7.

Second Half Summary
In the second half, Burris picked up right where he left off, leading his team on a 6-play, 69-yard drive capped off by a 9-yard TD pass to receiver Brad Sinopoli. The score put his team up by 20 points.

Late in the third quarter, Bo Levi Mitchell and the Stampeders strung together a much needed 4-play, 64-yard scoring drive that was capped off by a 34-yard TD pass from Mitchell to receiver Lemar Durant.

The Stampeders continued their comeback bid early in the fourth quarter, finishing a 6-play, 55-yard drive with a 1-yard TD rush by Canadian QB Andrew Buckley. Calgary was fortunate to secure the field position that led to the score, with Head Coach Dickenson winning a challenge for a non-call on pass interference. However, despite the clutch TD, kicker Paredes missed the convert, leaving his team 4 points shy of the REDBLACKS lead.

Seeing their lead slip away, Burris took to the field, hungry to cushion his side’s lead. He led his team on a determined drive downfield, but with the end zone in sight, he threw a misguided pass that was picked off by Ciante Evans. Despite the stumble, Ottawa’s defensive unit put up a clutch stop on the next series.

Burris brushed off that misplay on the very next drive, piecing together a 71-yard, six play drive capped off by a 1-yard TD rush from the veteran QB. The drive was highlighted by a long 38-yard pass to receiver Juron Criner, who displayed great pace and focus to reign in the long pass. Kicker Ray Early missed the ensuing convert, leaving the REDBLACKS late fourth quarter lead to just 10 points.

With the Cup on the line and just three minutes to play, Mitchell led his team on a 78-yard, 5-play drive capped off by a 19-yard TD carry from DaVaris Daniels. Kicker Paredes hit the convert to bring the Stampeders to within three points of the REDBLACKS, 33-30.

On the very next play, Paredes kicked a short punt. Sinopoli rose to receive the football, but it slipped through his fingertips and Calgary recovered. Mitchell proceeded to march his team downfield, driving his team right up to the 2-yard line. Calgary attempted to run the ball, but Buckley’s wide route was read well by Ottawa’s defensive unit and the QB was tackled for a loss of one yard. Still trailing by three points, Calgary opted for the security of the field goal and Paredes came through, hitting a 10-yarder to tie the game and send the 104th Grey Cup to overtime.

In over time, Burris picked out receiver Ernest Jackson down the middle of the field with a bullet pass. The receiver bobbled the football once, then twice, before wrestling it under control and stumbling into the end zone.

Mitchell and the Calgary Stampeders were unable to answer on their next possession, surrendering the game and the Grey Cup to the Ottawa REDBLACKS.