What a look! REDBLACKS create buzz with new uniforms 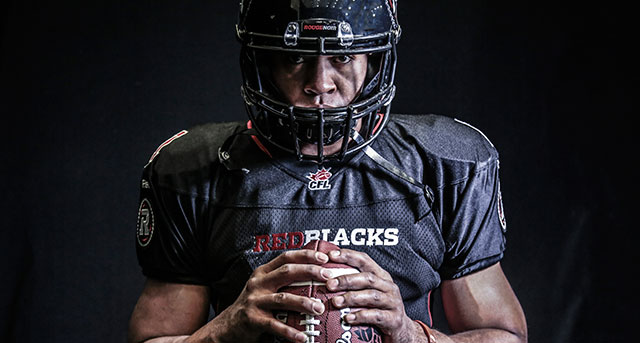 What a look! REDBLACKS create buzz with new uniforms

OTTAWA – The Ottawa REDBLACKS of the Canadian Football League moved another vital step toward the launch of the team’s inaugural season with the revelation of the team’s uniform during an event attended by approximately 1,200 fans at the Ottawa Conference and Event Centre.

The uniform mixes the classic look of Ottawa football in red, black and white with bold new styling, which includes jerseys with

numbering based on the team’s saw-blade logo, paying tribute to the history of the lumber industry in Ottawa-Gatineau.

“We know that our fans love our colours and we know that they’ll wear the colours of our teams proudly in the months and years ahead,” said Jeff Hunt, President of Sports with the Ottawa Sports and Entertainment Group (OSEG), which operates the REDBLACKS, the Fury FC of the North American Soccer League (NASL), the Ottawa 67’s of the Ontario Hockey League and TD Place, the venue for all three teams.

A new team store will open at Fifth Avenue Court (99 Fifth Ave., at Bank Street) on Wednesday morning at 10 a.m. REDBLACKS jerseys will be available exclusively at both team stores (the other store at 2016 Ogilvie Rd., east of Blair Road) and online at the team’s website (ottawaredblacks.com) during the upcoming week.

Marcel Desjardins, general manager of the REDBLACKS, also attended along with the team’s coaching staff, including head coach Rick Campbell.

Fans also saw for the first time the look of the team helmet with the ROUGE et NOIR wordmark prominently displayed on the front to reinforce the existence of two official team names: ROUGE et NOIR and REDBLACKS.

The REDBLACKS will wear a black jersey, black helmet and black pants with red trim when playing at home at TD Place. The road uniform consists of a white jersey, white helmet and white pants with black stripes and red trim.