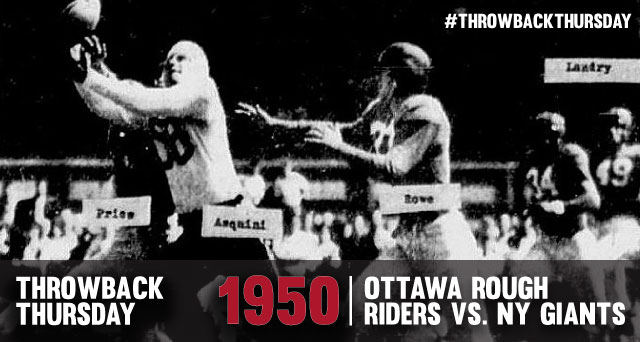 Steve Owen’s New Yorkers, giants in stature as well as in name, also treated 11,025 fans to a display of the sharp passing attack which features the play of the professional teams while defeating the Rough Riders, 27-6, in the season’s local exhibition opener

On a bright, hot day- ideal for baseball and swimming- the Giants outscored the local Big Four entry by a 13-6 count in the first half under Canadian rules and then added two converted touchdowns in the second half while operating under the American gridiron code.

Actually, it wasn’t a true test for the American style of football. Against another American squad, against a team fully versed and equipped for the U.S. code, it might have been a spectacular show. As it was, there was something missing for the big crowd in the second half.

This was a fine effort by the Riders under their own rules. They could have wound up the first half only a point down. They struck for a major score on the fifth play of the game and, trailing 7-6, they yielded the Giants second touchdown in the closing minutes of the first half while their second-strong line was on the field.

The Riders had little to offer in the second half. They never got out of their own end of the field. Their interference formed too slowly. Their line did well enough, throwing back a New York challenge on their own 19 in the third quarter and taking the ball away from the opposition on downs.

The second, outside touchline stripe- used in the first half and eliminated in the second half to meet the requirements of the reduced width for the American rules- cost the visitors some great gains, possibly a couple of major scores. The ball-carriers kept stepping into touch by using the outside stripe as their target, Charlie Conerly, the Giants’ passing ace from Mississippi, entered the game in the second half. Before he appeared, Tom Landry and backfield coach Al Sherman combined to complete ten out of 18 first-half passes.

Then, with Conerly pitching all but the last couple of passes, the Giants made good on seven out of a dozen in the second half. The pass-snaring of fellows like Forrest Griffith, Emlen Tunnell, Ray Poole and ex-Dartmouth ace Dave Beeman was a treat.

Andy Gordon threw most of the Riders’ passes. The Ottawans wound up with an eight-for-20 average, three of them coming in the last minute of the game. The Giants’ pass defence gave the Riders little leeway, although two passes provided that early Rider major.

Griffith was the big gun for the Giants. He is a powerhouse ball-carrier even without all that American interference. When this extra interference was provided, he accounted for both second-half touchdowns.

Steve Hatfield got the other pair of majors for the visitors, one in each of the first and second quarters. Asquini took Bruce Cummings’ pass for the Riders’ lone major.

Cummings’ remarkable kicking was one of the game’s highlights. He uncorked one 75- yarder for a point, a couple of others which travelled 60 or more, and he had the Giants’ halves looking back over their heads most of the time on his punts. Cummings’ ball carrying was impressive and Gordon and Howie Turner came up with their usual solid efforts.

Tom Clavin, the new Rider back from Villanova, did most of the plunging and made good headway. Ted McLarty turned in one of his best efforts and gained valuable yardage, while Gerry Lefebvre, Eddie Michaels, Don Loney and Buck Rogers stood out on the line. John Rogers, one of the imports trying out with the Riders, made a couple of prominent plays, as did ex-Buffalo Bills Paul Gibson and Bill Stanton.

Tunnell was fairly flying with the ball at times. He can really turn it on. But, the Giants kept coming up with running backs in bunches. When Griffiths and Tunnell weren’t on the move, Eddie Price, Randall Clay, Bob Jackson, Harmon Row, Hatfield, Joe Diminick or Jim Ostendarp were taking over.

When Landry fumbled on his own 35 on the first play after the kickoff, Ottawa moved fast for a touch. Howie Turner threw a 26-yard pass to Joe Asquini over the left end and Cummings finished the drive by taking Gordon’s lateral and firing a scoring pass to Asquini over the right end. Eric Chippers’ convert bid was wide and low.

Landry got the Giants’ scoring started a few minutes later when he punted over the goal-line from the Ottawa 30 and Wilf Tremblay was clipped by Bill Swiacki for a rouge.

The Giants went the length of the field- from their own 2- for their initial major. Beeman made a spectacular catch of Landry’s forward on his own 40 for a 33-yard gain and lateralled to Ostendarp, who went to the Ottawa 43, an over-all gain of 65 yards. Then Landry tossed a 15-yard pass to Jack Salschelder and a 10-yarder to Otto Schnellbacher before Hatfield took it over from the four-yard stripe in two plunges. Ray Poole converted to make it 7-5 tor New York.

Cummings, kicking from the New York 50, hoisted his 75-yarder just a foot or so short of the deadline for an Ottawa single and the first quarter ended with the Giants leading, 7-9.

With Sherman shooting left-handed passes in the second quarter, the Giants moved from their own goal line for another major. Schnellbacher took one pass for 21. Sherman ran for eight. Griffith hit the left end for 15 and then came right back to travel 32 yards- 15 after he had apparently been stopped. Then Swiacki grabbed Sherman’s pass, good for 24 yards, and a touch, which Poole converted to end the first-half scoring.

Conerly’s passing and Rowe’s ball-carrying set the stage for two plunges from four yards out for Griffith’s first major in the third period. He converted to make it 20-6. A Conerly-to-Beeman pass paved the way for Griffith’s second touch, which Beeman converted by taking Conerly’s pass over the left end.