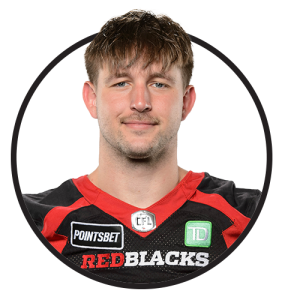 2022: Had a career year in his first campaign with the REDBLACKS, recording 1,169 receiving yards thanks to 75 catches on 116 attempts. He also found the end zone twice…380 of Acklin’s receiving yards came after the catch … his longest reception was 64 yards and came in Week 13 against Montreal … suited up for 15 of 18 regular season games.

2019: Signed with the Tiger-Cats March 20…Started 17 regular season games, recording 58 receptions for 708 yards and three touchdowns…Made CFL debut starting at wide receiver June 22 at Toronto recording five receptions, including the first of his CFL career, for 59 yards… Recorded 120 yards from eight receptions with one touchdown July 4 at Montreal…PLAYOFFS: Started both of the Tiger-Cats’ playoff games including the 107th Grey Cup versus Winnipeg, registering 133 receiving yards on eight receptions.

2018: Signed as an undrafted free agent by the Baltimore Ravens…Released by the Ravens August 7.

Personal: Born August 10, 1995 in Springfield, Missouri..Son of Darin and Tina Acklin…Majored in Psychology with a minor in Law Enforcement and Justice Administration.