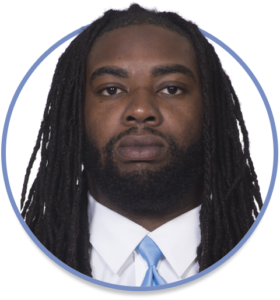 2016: Played five games with Calgary. Playoffs: Did not play.

2015: Signed with Saskatchewan Roughriders May 30th. Made his CFL debut August 22nd against Calgary. Played two games for Riders before being released September 29th…Signed with Calgary September 29th. Played one game with Stampeders. Playoffs: Did not play.

College: Signed with Florida Atlantic, but instead attended the College of the Sequoias, a junior college. Transferred to Missouri State (2011-12). Started all 22 games be played for the Bears.  Was named Third Team All-American by the Associated Press as a senior.

Personal: Born in Kingston, Jamaica. Attended Royal Palm Beach High School in Florida. Was also a standout on the wrestling and basketball teams.