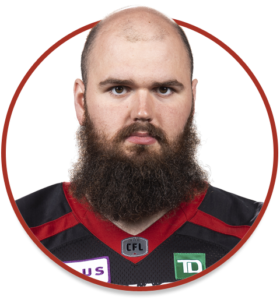 Gagnon became a starter right from the start of the season as he gained valuable experience, playing in all eighteen regular season games of the Alouettes.

Gagnon played four seasons for the Université Laval Rouge et Or, helping the team win back-to-back Vanier Cups in 2012 and 2013. In 2014, the Ancienne-Lorette, QC native was a key member of an offensive line that helped running back Maxime Boutin lead the Quebec Conference with 678 ruishing yards. The team finished fourth in the country with 1,688 rushing yards. Also, Rouge et Or front-five allowed a conference-low seven sacks in eight games, which was tied for lowest total in Canada. Gagnon was selected a RSEQ first team all-star and a U SPORTS second team all-star in 2014 and 2015.