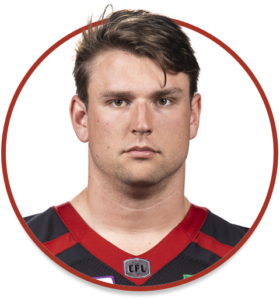 Nolan MacMillan is an offensive lineman currently playing for the Ottawa REDBLACKS.

Selected in the first round of 2013 CFL Draft, ninth overall, becoming the first ever draft pick by the REDBLACKS. Re-signed by the club on February 14, 2017.

Dressed for seven games for the REDBLACKS after battling injury early in the year.