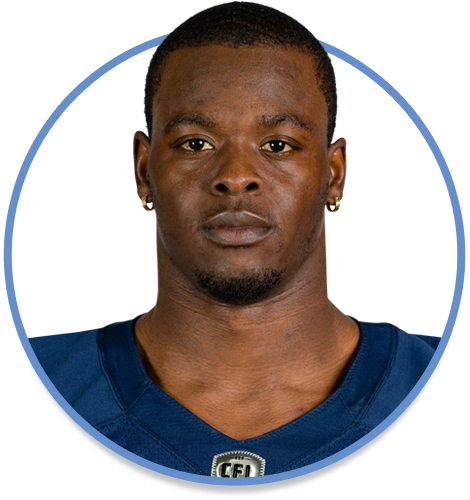 Acquired: Selected in the fourth round, 31st overall, of the 2016 CFL Draft.

2019: Played in 16 games, started three. Caught 28 passes for 259 yards and one TD, the touchdown coming at Saskatchewan July 1. His best totals were Week Two versus Hamilton where he caught seven passes for 71 yards. Finished second on team with 21 special teams tackles.

2018: Played in all 18 games, starting one for Toronto. Made his lone start at B.C. on October 6th. Set career highs with 47 catches for 512 yards. Caught a touchdown pass in the game he started in Vancouver. Had eight catches for 105 yards at Montreal October 28. Scored a 49-yard TD after recovering a fumbled punt return against Winnipeg July 21st.

2016: Played in 18 games, started two. Chosen by the Argos in the fourth round of the draft. Signed May 24. Had three catches for 51 yards and a TD. Made 19 special teams tackles. Returned 14 kickoffs. Made CFL debut June 28 against Hamilton.

Junior: Played the 2015 season with the Windsor AKO Fratmen of the CJFL. Caught 25 passes for 398 yards and six TDs. Also returned a punt, a kickoff and a missed field goal for touchdowns.

College: Played 14 games over two seasons at the University of Toronto. Had 49 catches for 758 yards in just six games in his final season with the Varsity Blues. Had four games with at least 100 receiving yards. Posted a 200-yard game against Carleton. Was an OUA All-Star and a Second Team U Sports All-Canadian.