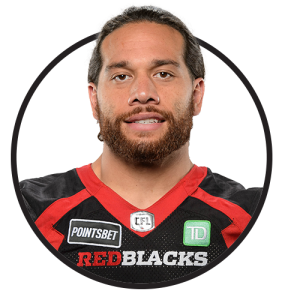 ACQUIRED:
From Edmonton February 5, 2013 along with LB Simoni Lawrence and OL Greg Wojt in exchange for LB Nathan Kanya and the rights to OL Carson Rockhill.

2016: Played in all 18 regular season games, starting eight times, at quarterback for the Tiger-Cats…Completed 230 of 332 pass attempts (69.3%) for 2,695 yards with 15 touchdowns and 12 interceptions…Added 44 carries for 180 yards and six touchdowns…Recorded 31 completions on 38 attempts for a career-high 391 yards and three touchdowns, setting a CFL record with 23 consecutive completions en route to being named the Shaw CFL Top Performer for Week 5…Finished the season ranked tied for sixth in CFL rushing touchdowns (6), tied for seventh in passing touchdowns (15) and eighth in passing yards (2,695). PLAYOFFS: Played in the Eastern Semi-Final November 13 versus Edmonton…Registered one completion for 46 yards and added four carries for six yards with one touchdown.

2014: Dressed all 18 regular season games, starting in one, in his second season with the Tiger-Cats…Completed 21 of 45 passes for 293 yards and one touchdown…Added 14 carries for 57 rushing yards…Made first-career start versus Calgary July 18. PLAYOFFS: Dressed in both of the Tiger-Cats playoff games, including the 102nd Grey Cup versus Calgary.

2013: Dressed in all 18 regular season games in his first season with the Tiger-Cats after being acquired via trade February 5…Completed one of two passing attempts for 12 yards and a touchdown…Added 10 carries for 61 yards rushing….Made CFL debut at Toronto June 28…Threw first-career touchdown versus Montreal October 26. PLAYOFFS: Dressed in all three of the Tiger-Cats playoffs games, including their Grey Cup loss to Saskatchewan.

2012: Spent the season on the injured list after signing with the Edmonton Eskimos April 10.

2011: Played in three games with the UFL’s Omaha Nighthawks after they selected him in the eighth round of the UFL Draft…Signed with the NFL’s San Francisco 49ers July 29…Attended training camp and was released by the 49ers August 22.

COLLEGE/PERSONAL:
College: Finished his NCAA career at Ole Miss in 2010 after two seasons at Oregon (2008-09)…Threw for 2,039 yards and 14 touchdowns while rushing for 635 yards and six rushing touchdowns…Finished his NCAA career with 5,930 passing yards, 1,930 rushing yards, 42 passing touchdowns and 29 rushing touchdowns…Earned second-team All-Pac 10 honours and the team’s Most Outstanding Player award in 2009…Led Oregon to a Pac-10 Championship and a Rose Bowl appearance in 2009…Named the MVP of the Holiday Bowl in 2008…Also played one season at City College of San Francisco (2007) where he was named Offensive MVP after leading his team to the National Junior College Championship.