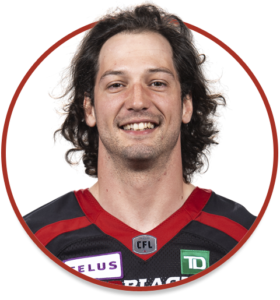 Jean-Christophe Beaulieu is a fullback currently playing with the Ottawa REDBLACKS.

Acquired via trade from the Montreal Alouettes for Pat Lavoie on Jan. 30, 2018

Played in 10 regular season games for the Alouettes. He totaled 91 rushing yards on seven carries for one touchdown. Added 50 receiving yards on 6 receptions. The bulk of his offensive stats came from Week 6 against the Winnipeg Blue Bombers (July 27). He had two carries for 42 yards and a touchdown, he ran for his longest run of the year with one of the carries (41 yards).