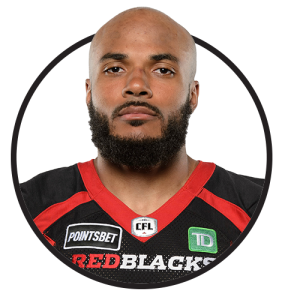 ACQUIRED:
Selected by the Hamilton Tiger-Cats in the second round, 11th overall, in the 2018 CFL Draft.

CAREER:
2021: Dressed in 13 regular season games, including one start…Totalled 17 carries for 72 yards and four special teams tackles…Registered 12 carries for 58 yards, including a 13-yard run and a successful two-point convert October 23 vs. Ottawa…PLAYOFFS: Dressed in all three playoff games.

2019: Dressed in 16 regular season games starting two…In his first season at running back, recorded 29 carries for 147 yards and one touchdown…Added eight receptions for 72 yards…Registered 12 carries for 77 yards and the first rushing touchdown of his career September 2 vs. Toronto…PLAYOFFS: Played in both of the Tiger-Cats’ playoff games including the 107th Grey Cup versus Winnipeg.

COLLEGE/PERSONAL:
College: Played four seasons at the University of Ottawa (2014-17)…Played 23 games during his four year collegiate career with the Gee-Gees…Played for the East Team in the U SPORTS East-West Bowl…In 2017 was named an OUA First-Team All-Star as a linebacker, was named OUA Stand-Up Defensive Player of the Year and a U Sports Second-Team All-Canadian…Was named a OUA Second-Team All-Star twice, once as a return specialist (2017) and once as a linebacker (2016).