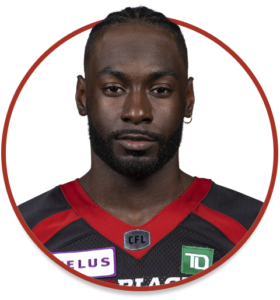 Acquired: Signed as a free agent by the Toronto Argonauts on February 14, 2018.

2017: Played in 18 regular season games for the Riders…Had 14 carries for 66 rushing yards while adding one reception for 34 yards…added 32 kickoff returns for 732 yards. Playoffs: Dressed in both the East Semi-Final at OTT and East Final at TOR but did not record any stats.

2016: Played eight regular-season games with the Esks in his second season with the club…Recorded 68 yards on three kickoff returns…Released by the Eskimos on August 31…Signed as a free agent by the Saskatchewan Roughriders on September 1…Played in nine games, starting one, for the Riders…Rushed for 112 yards and one touchdown on 14 carries while adding 77 yards on eight catches… Also returned two kickoffs for 39 yards to go along with three special teams tackles.

2015: Signed as a free agent by the Edmonton Eskimos on September 6…Played in nine games for the Esks, recording 117 return yards on six kickoff returns…Member of the 103rd Grey Cup Champions.

2011: Played for the Westshore Rebels of the CJFL…Earned BC Football Conference Rookie of the Year honours with 1,064 rushing yards and eight touchdowns.

Played in 10 games during one season at New Mexico Military Institute (2013)…Recorded 995 rushing yards and seven touchdowns on 151 carries while adding 153 yards and one touchdown on 11 receptions…Returned three kickoffs for 53 return yards (17.7 AVG)…Named First-Team All-WSFL in 2013.