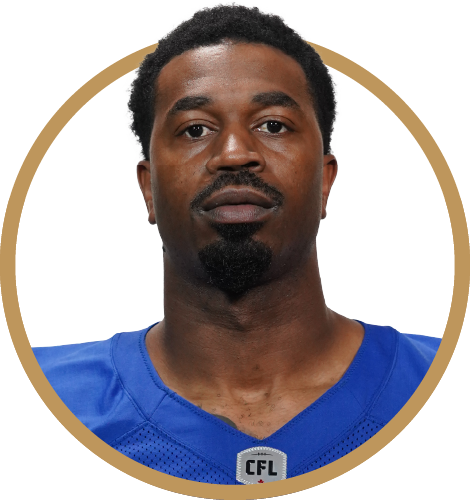 Came to Ottawa for his 9th CFL campaign and finished with his third-best statistical campaign with 949 receiving yards. While dressing for all 18 regular season games, Adams had 63 catches on 106 attempts, scoring twice … Had a season-high 50-yard reception in Week 11 against Edmonton.

An injury limited Adams to 13 games in 2019 and he finished the year with 47 catches for 549 yards and five touchdowns, ending a streak of back-to-back 1,000-yard seasons in 2017 and 2018. But the veteran receiver was especially effective in the Bombers push to a championship, making some critical catches in three playoff games leading up and including the Grey Cup.

Adams had six catches for 105 yards and a 71-yard touchdown in the Western Semi-Final win over the Calgary Stampeders and a week later pulled in eight catches for 93 yards in the Western Final victory over the Saskatchewan Roughriders. He then had three receptions for 11 yards in the Grey Cup decision over the Hamilton Tiger-Cats, and even completed a 13-yard pass to quarterback Chris Streveler.

He has 296 receptions for 4,226 yards as a Bomber, ranking him just outside the franchise’s Top 10 in both categories. He also has 34 touchdowns as a Bomber.

Made his second-straight appearance on the West Division All-Star Team after pulling in a team-high 61 receptions for 1,028 yards and 10 touchdowns. It marked his second-consecutive 1,000-yard season, while his 10 receiving touchdowns ranked second in the Canadian Football League. Adams had two 100-yard receiving games, including a 162-yard effort — on eight catches and for two touchdowns — in a game against Ottawa in August. Adams also threw for a touchdown in 2018, connecting with Andrew Harris for a score in a win over Montreal in June.

Posted career-best numbers in receptions (76), yards (1,120) and touchdowns (seven) before a shoulder injury in mid-October ended his season… Even with the injury and missing three games, Adams was still named to the West Division All-Star Team… Finished with career-best single-game marks in a win over Ottawa in September with seven catches for 195 yards and a TD… Had five or more catches in 11 of his 15 games in 2017.

Appeared in eight games in 2016 after spending Weeks 7-16 on the injured list with a shoulder injury… Returned to play the final two games along with the West Division Semi-Final at B.C… Recorded four 100-plus yard games in his eight starts, led the club with an average of 86.3 receiving yards per game and ranked third overall with 690… On a per-game basis, Adams ranked sixth in the CFL in receiving and scored six TDs on a total of 51 targets. Of his 51 receptions, 14 went for clutch second-down conversions… Signed with the Bombers as a free agent in February of 2015 and established himself as a legitimate CFL deep threat with 61 receptions for 839 yards and five touchdowns, including six catches of 30 yards or more.

Signed with the Argos on January 28, 2013 after first turning pro with the Carolina Panthers as an undrafted free agent in 2011 and then spending the 2012 season with the Virginia Destroyers of the United Football League… Saw spot duty in 2013 and 2014 with the Argos, dressing for 11 games and pulling in 21 passes for 261 yards and two touchdowns.