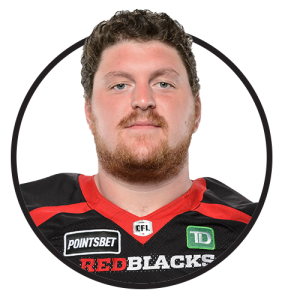 ACQUIRED:
Selected by the Hamilton Tiger-Cats in the first round, sixth overall, in the 2018 CFL Draft.

COLLEGE/PERSONAL:
College: Played four seasons at the University of Calgary (2014-17)…Played 28 games and started 19 during his four year collegiate career with the Dinos…Won the Hardy Cup (Canada West Championship) in 2016 and 2017 and the Mitchell Bowl in 2016…Played for the West team in the U SPORTS East-West Bowl…Named a CIS Second-Team All-Canadian and Canada West All-Star in 2015.

Personal: Attended Assumption CHS (High School) in Burlington, Ontario…Majored in Commerce at the University of Calgary.