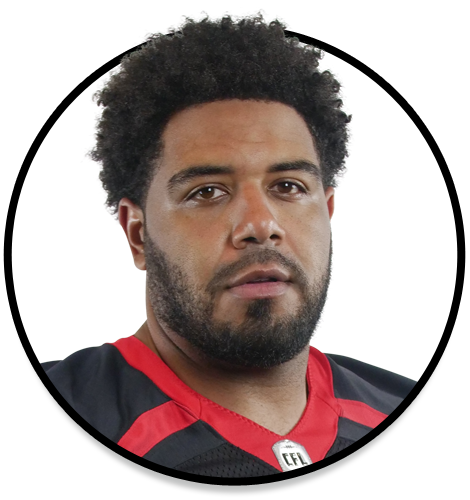 Drafted: Second round, ninth overall by Toronto in 2012.

Acquired: Signed a three-year contract with Ottawa on February 11, 2020.

2017-2020, Toronto Argonauts : Signed by the Argos on April 29, 2017, Laing started 10 of 11 games in an injury-shortened season. He registered 11 tackles, five sacks, and a forced fumble. Laing won his second consecutive Grey Cup with the Argos, recording the championship game’s first sack, and earned his second CFL East All-Star nod upon the season’s conclusion.

Laing signed a two-year extension with Toronto in January of 2018, and started all 18 games that season. He finished the year with 44 tackles and six sacks, also earning his team’s CFL Most Outstanding Player award nomination, as well as earning All-Star honours once again.

Laing appeared in, and started 15 games in 2019, recording 26 tackles and six sacks.He ultimately was named the Argos’ Most Outstanding Defensive Player, as well as their Most Outstanding Canadian Player, and making his third straight All-Star team.

2016, Ottawa Redblacks: Laing signed with the Redblacks on November 3, 3016, appearing in one regular season game. He also suited up for two postseason contests, including that year’s victory in the 104th Grey Cup.

The following year, Laing was limited to 12 games, but still recorded 14 tackles and three sacks.

2015 was a breakout season for Laing. He started all 18 games, notching 34 tackles, a career-high eight sacks, and two forced fumbles. Laing received his first All-Star honours after the 2015 campaign.

2016, Miami Dolphins: On February 29, 2016 Laing signed with the Dolphins. He dressed in four preseason games, starting one, and recorded nine tackles and a sack.