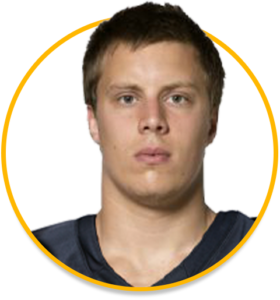 CAREER
2019: Signed with the Hamilton Tiger-Cats June 10…Played in seven regular season games with the Tiger-Cats…Released by Hamilton August 20.

2018: Played in 18 games with the Argonauts and started the season finale in Ottawa…Recorded 11 special teams tackles, three defensive tackles and the first sack of his career.

2015: Selected in the third round, 21st overall, in the CFL Draft…Signed with the Argonauts May 26…Dressed in 10 games…Made two special teams tackles. Playoffs: Played in East Final at Hamilton.

COLLEGE/PERSONAL:
College: Played four seasons at the University of Guelph. Was a First Team OUA All-Star in his final year after posting five sacks, 10.5 sacks and 37.5 tackles. Named a Second Team OUA All-Star the previous season. The Gryphons Special Teams Player of the Year in 2012. His final numbers at Guelph were 122.5 tackles, 23 tackles for a loss, 13 sacks, three forced fumbles and a pair of fumble recoveries.