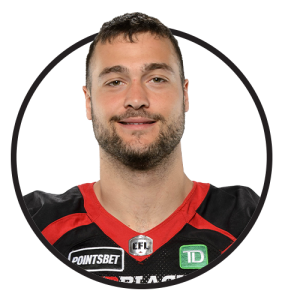 ACQUIRED: : Drafted in the 1st Round, 6th Overall by Ottawa in the 2020 CFL Draft

2022: Played 12 games in his sophomore season with Ottawa in 2022 and finished the year with a career-high 44 defensive tackles and 8 on special teams … Had the first sack of his CFL career in Week 21 against Hamilton … Recorded a season-high six defensive tackles in Week 5 against Saskatchewan.

2021: Recorded two special teams tackles in his CFL debut in Week 1 against Edmonton … Finished his rookie campaign with 12 defensive tackles and 8 on special teams … Forced a fumble in Week 11 against Montreal.

College: Adam Auclair enjoyed a decorated collegiate career with the Laval Rouge et Or (U Sports), winning two Vanier Cup’s in 2016 and 2018, respectively. He also stood out on an individual level, earning RSEQ Rookie of the Year honours in 2016, being named both provincial and national Defensive Player of the Year in 2017, and the MVP of the 54th Vanier Cup. A two-time U Sports All-Star, Auclair ended his collegiate career with a total of 113.5 tackles and seven interceptions across three seasons.

Personal: Auclair’s brother, Anthony, currently plays for the NFL’s Houston Texans, and won a Super Bowl with the Tampa Bay Buccaneers during the 2020 season.