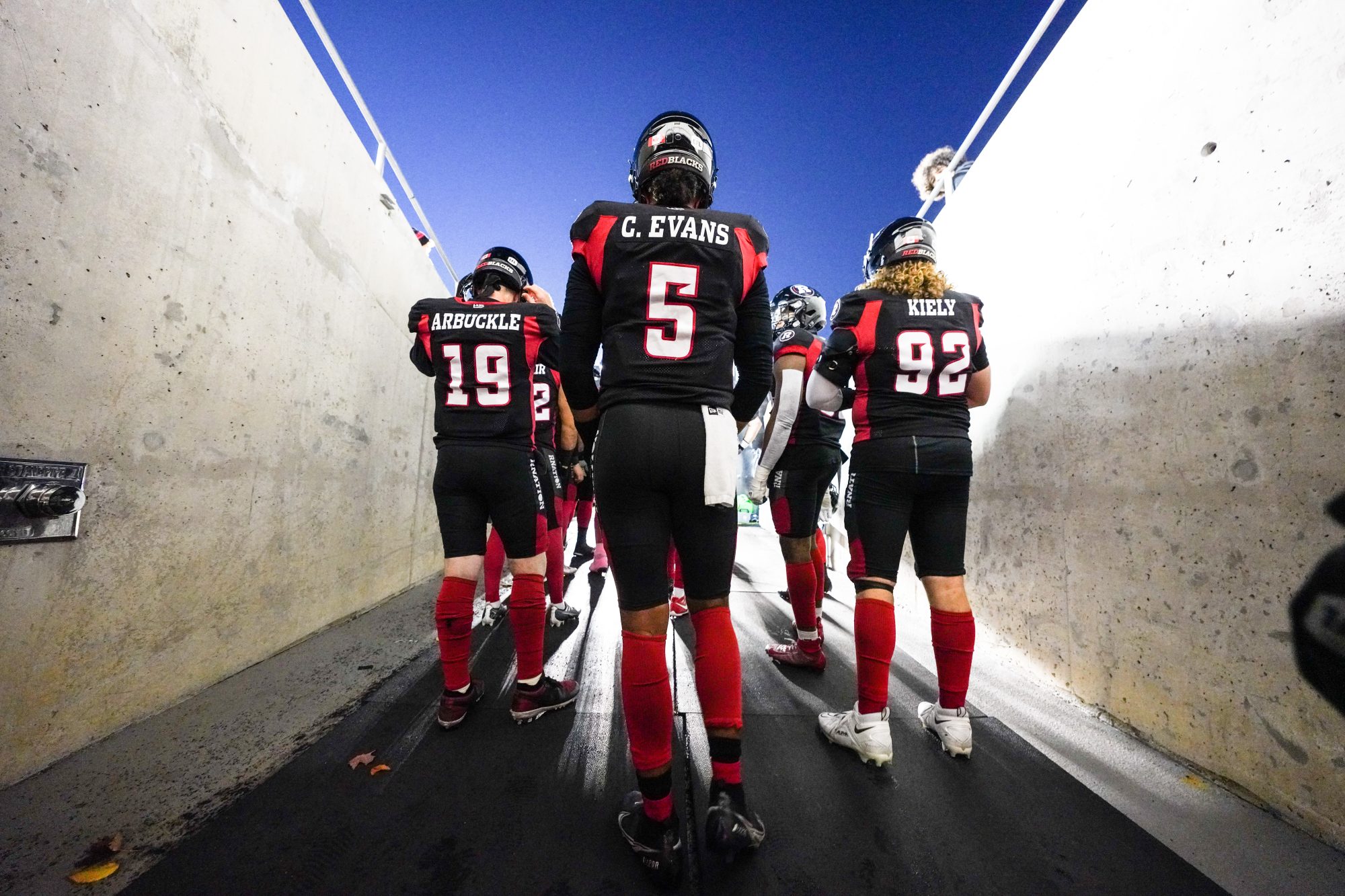 Whether it has been as the starting quarterback, or coming off the bench for short-yardage situations, Caleb Evans’s impact on the Ottawa REDBLACKS has been simply undeniable.

In 2022, no rusher has found themselves in the endzone more than Evans, who has scored 13 majors on the ground, edging out the likes of Dominique Davis (12), Ka’Deem Carey (nine), and Cody Fajardo (eight). Evans’s season performance is impressive league-wide, but locally, it’s even more impressive.

With his 13 rushing touchdowns, Evans currently stands tied for second in single-season rushing scores in Ottawa football history, behind only Ron Stewart (15, 1960), and tied with both Art Green (1976), and Alvin Walker (1982). Just two seasons into his CFL career, Evans already finds himself in impressive company, but the list of achievements doesn’t end there, either.

In 2021, Evans found the endzone on the ground three times, bringing his career total up to 16, good for the REDBLACKS’ record for most career rushing touchdowns. Still chasing Evans in that category, of course, is William Powell, who cashed in his 14th rushing score this season, but at least for the time being, Evans leads the way.

For as impressive as Evans’s achievements so far in his short CFL career have been, he hasn’t paid too much attention to them. In fact, it came as a surprise to the 24-year-old pivot that he is as high up the list as he is.

“You’re focused on trying to win, and the stats just have to play out themselves,” Evans said. “You don’t focus on those things until guys bring it up to you.”

Even if he’s not paying attention to the numbers, it’s clear that Evans is becoming comfortable in the endzone. Sometimes it’s a solo celebration, sometimes it’s a dance with a few different players, and occasionally, it’s an impressive scene, but the touchdown celebrations have become a part of the show when Evans gets into the endzone.

“Some of them are spur of the moment,” Evans said. “Patrick Levels wanted to eat a Thanksgiving feast in the endzone last week, so that was planned by him.”

When the REDBLACKS lost Jeremiah Masoli due to injury earlier in the season, Evans was ready for another chance to take over the starting role. The results were mixed, with the highs including a win against the East-leading Toronto Argonauts at BMO Field, but eventually, the lows won out, culminating in Evans’s eventual benching in favour of Nick Arbuckle.

It was a difficult pill to swallow for Evans, who wanted nothing more than to be the guy. Short yardage in the CFL, however, still offers backup quarterbacks a chance to contribute to the game, something other varieties of football don’t have. Despite not being the guy throwing the ball, Evans found an alternative method to put his stamp on the team, and the history books.

“I want to be the best person I can be for the team,” Evans said. “You always want to be the guy, but [when it doesn’t work out that way], you have to be a good team player about it.”

For the REDBLACKS as a whole, Evans says there is a choice to be made. With a home-and-home matchup with the Hamilton Tiger-Cats to close the season, Ottawa can still make the playoffs.

“We have a decision to make with two games left,” Evans said. “We either go hard for two games, or we go home early, that’s the reality that we’re facing in the locker room.”