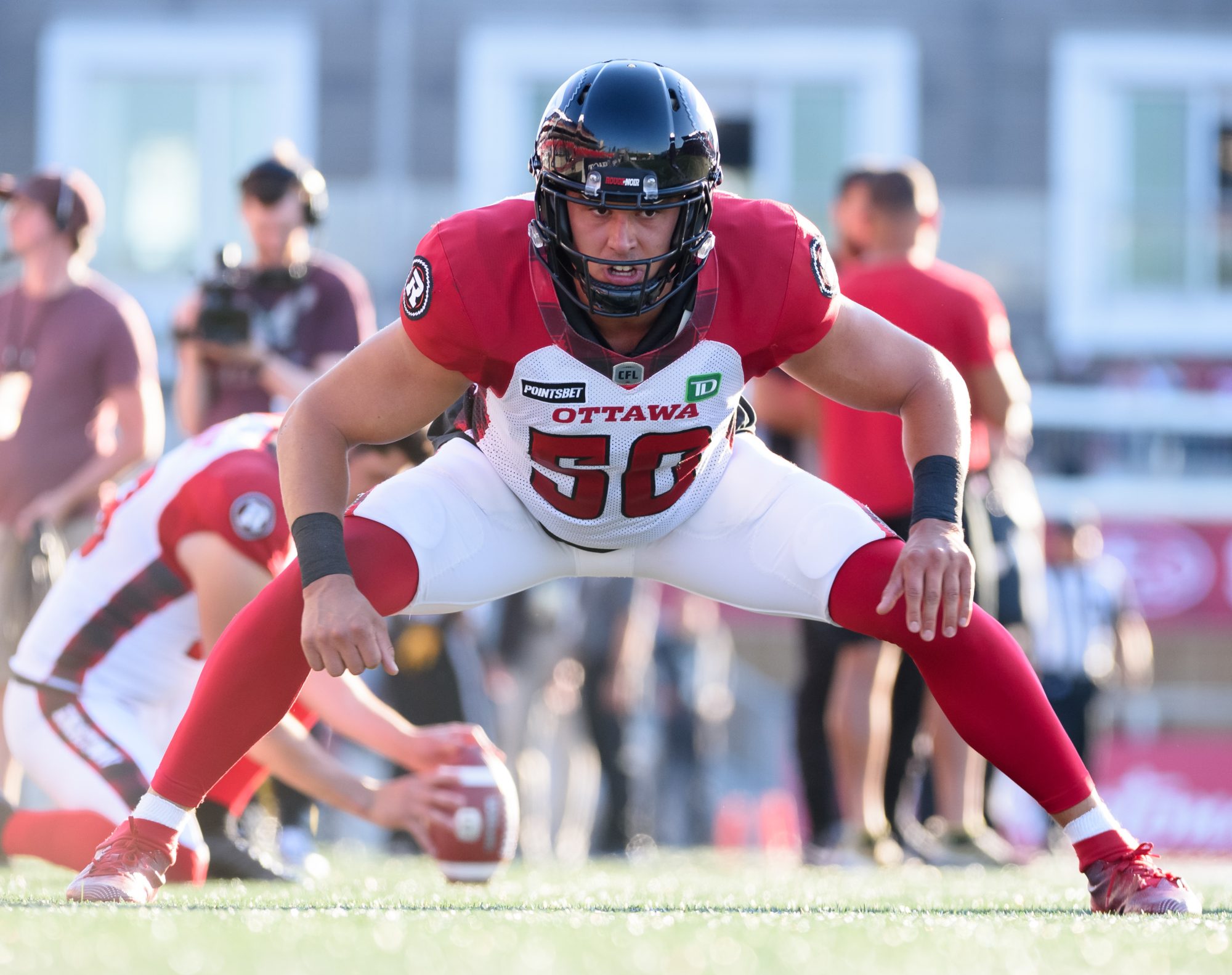 If there’s a position in football as under-appreciated as the long snapper, it is yet to be found. A good long snapper is almost never talked about, but when a bad snap comes back, it has the potential to change the game.

Since 2017, Louis-Philippe Bourassa, who the REDBLACKS selected with their fourth-round pick in the 2017 CFL Draft, has anchored the special teams unit. He didn’t start football until later than most, and he didn’t start as a long snapper, of course, but the “funny story” has shaped a great CFL career.

“I was in a walking boot, and the guys on the sideline were just snapping the ball,” Bourassa said. “I decided to try it, and the special teams coach saw me, and I was better than the guy that was actually doing it.”

Bob Dyce, the Special Teams Coordinator since 2016, has always loved what he has seen from Bourassa, and has remained loyal to his long snapper.

“First off, he loves the game of football,” Dyce said. “Secondly, he’s a great athlete. He runs exceptionally well, he gets down the field, he’s not afraid of contact, and he also has the size.”

“As long as I’m here, L.P. will be my guy. Heaven forbid I have to go somewhere else, I’ll try to take him there with me,” Dyce said with a laugh.

Despite being one of the most under-appreciated positions on the field, the long snapper has a lot of responsibilities, and those responsibilities take a multitude of talents.

“A football is an odd object to throw as it is,” Dyce said. “If you can imagine needing to do that upside down and between your legs, that’s the technique and talent it takes to be a long snapper. It’s not different than with a quarterback, you have to be extremely accurate, you have to have great velocity, and then what people don’t understand, they are playing on the line of scrimmage as well.”

A history playing fullback in high school and with the Montreal Carabins, although in limited reps, has helped Bourassa understand the blocking aspect. The other parts, however, he has learned as time has gone on.

Coming in at six-foot-three and just a few clicks over 230 pounds, Bourassa says that his athleticism allows him to do just about everything he is asked of, from blocking, to getting down the field on punt coverage.

Bourassa’s success, or failure, for that matter, does more than just impact himself. Whether it’s sending a snap back for a Lewis Ward field goal, or a Richie Leone punt, missing his mark by the slightest margin can have a disastrous impact on the play.

“We are three pillars [the snap, the hold, the kick]. We probably wouldn’t be as successful as we are without him.”

“There’s no success from me without him,” Leone admitted. “It starts with him.”

This is just part of the job for Bourassa, however, and he’s more than okay with that.

“What makes me happy is making Lewis’s or Richie’s life easier,” he said. “If I can put the ball in the same spot every time with a perfect spiral, then I can say I did my part. I take great pride in that.”

Sometimes, things do go wrong. When that happens, Leone says that Bourassa is always one of the people there to pick him up.

“You want to be accountable to your teammates,” said Leone. “Sometimes you miss a field goal or shank a punt, that’s going to happen, so it’s good to have someone there to encourage you.”

“I’m really grateful that he’s my teammate, and my friend. We have grown really close, and I have learned a lot from him. It’s good to be around people who want to be great.”

It’s a tight group that has been together since 2018, and the addition of Jose Maltos has only added to the strength of the special teams. The appreciation that all four hold for one another is unmatched, and helps them work together as a cohesive unit.

“It’s the best group I have ever had,” Bourassa said. “We work so hard together, and Coach Dyce is the best coach I have ever had in my life. We want to be the guys that perform at the highest level every single game.”