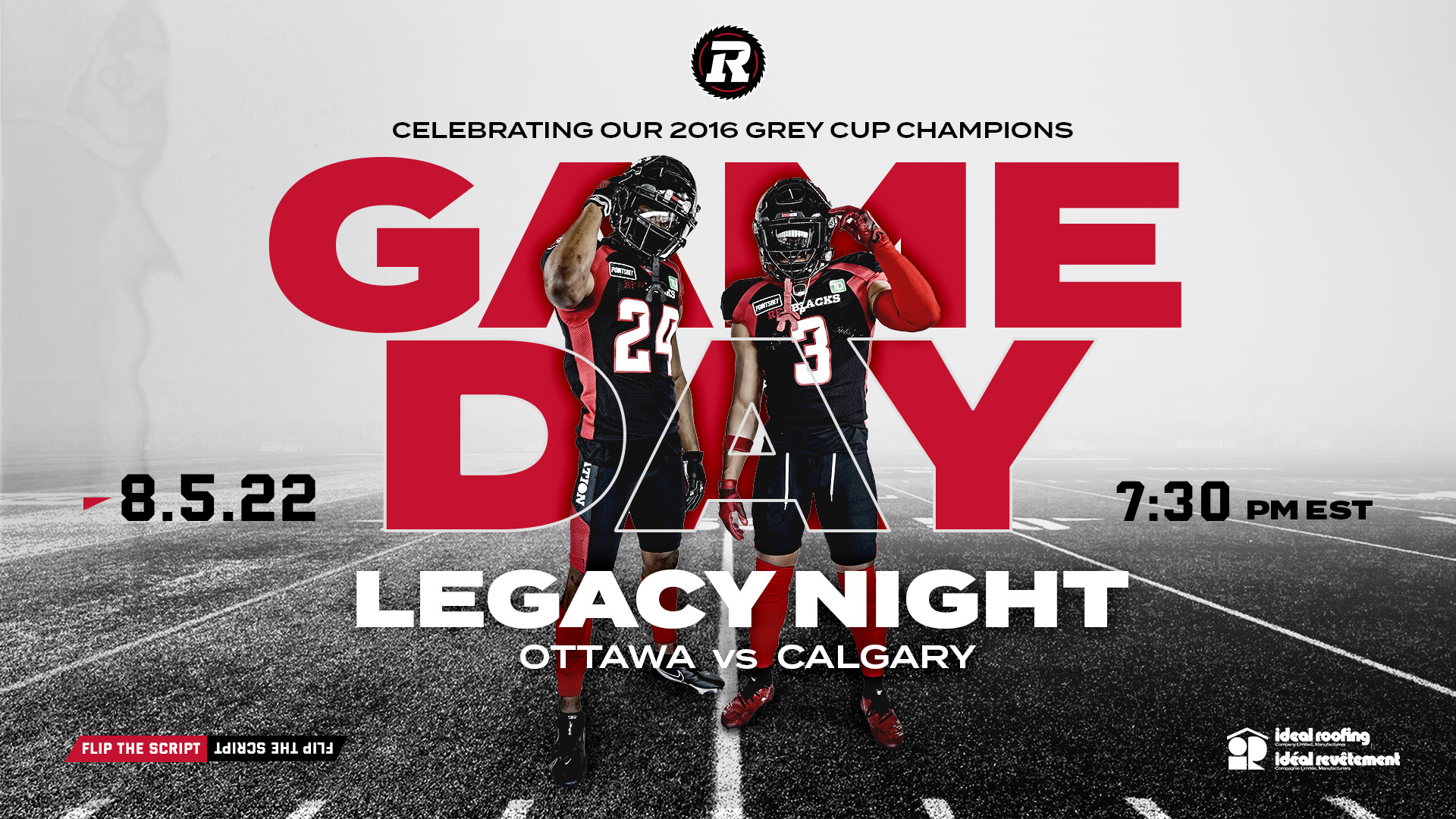 Just five days removed from their first win of the season, the Ottawa REDBLACKS are looking to make it two in a row, tonight, with the Calgary Stampeders in town for a 7:30 pm ET kickoff.

It’s Legacy Night at TD Place, with the REDBLACKS honouring their 2016 Grey Cup-winning squad, and the storied tradition of football in the Ottawa-Gatineau community.

The REDBLACKS finally found the win column on Sunday, with a 23-13 victory over the Toronto Argonauts at BMO Field. Caleb Evans threw for 286 yards, and a pair of touchdowns to Jaelon Acklin, and Nate Behar, respectively, en route to Week 8 Top Performer honours. Acklin totalled 144 yards through the air, as he capped off July by being named one of the month’s Top Performers, and leading the CFL with 687 receiving yards.

Defensively, the REDBLACKS blanked the Argos in the second half, led by CFL sack leader Lorenzo Mauldin IV, who also forced a key fumble late in the game.

Ottawa will get a boost in the secondary tonight, with the return of Money Hunter, who hasn’t suited up since Week 4, against the BC Lions. Despite the prolonged absence, Hunter remains tied for the CFL lead with three interceptions.

The Stampeders were last in action on Saturday, dropping a narrow 35-28 defeat to the Winnipeg Blue Bombers. Quarterback Bo Levi Mitchell threw for 219 yards, while running back Kadeem Carey — out tonight due to injury — ran a pair of touchdowns in on the ground.

Abdul Kanneh, defensive back, on the team’s focus on getting another win: “One game at a time, one practice at a time, one play at a time. You mess up, forget about it. Come to the sideline, watch the film, but the play after that, just put your best foot forward and keep it going.”

Nate Behar, receiver, on what went well in Toronto: We have to keep it clean and keep it moving. We did a lot of good things, things that successful teams do. We finished with the ball in our hands, we had a big sack on a drive to win. That was stuff that had been missing. It adds confidence, it lets us know we’re closer to the answers.”

Paul LaPolice, head coach, on the challenge posed by a 4-2 Calgary team: “Calgary does a great job of ‘next man up’. Every year, there will be games where they’re missing half their guys, they’re missing a bunch of O-linemen and they still come to perform. For us, it’s about what type of defence we’re playing and what kind of offensive system we’re playing more than who their players are. I’m sure whoever they have to play will be ready.”