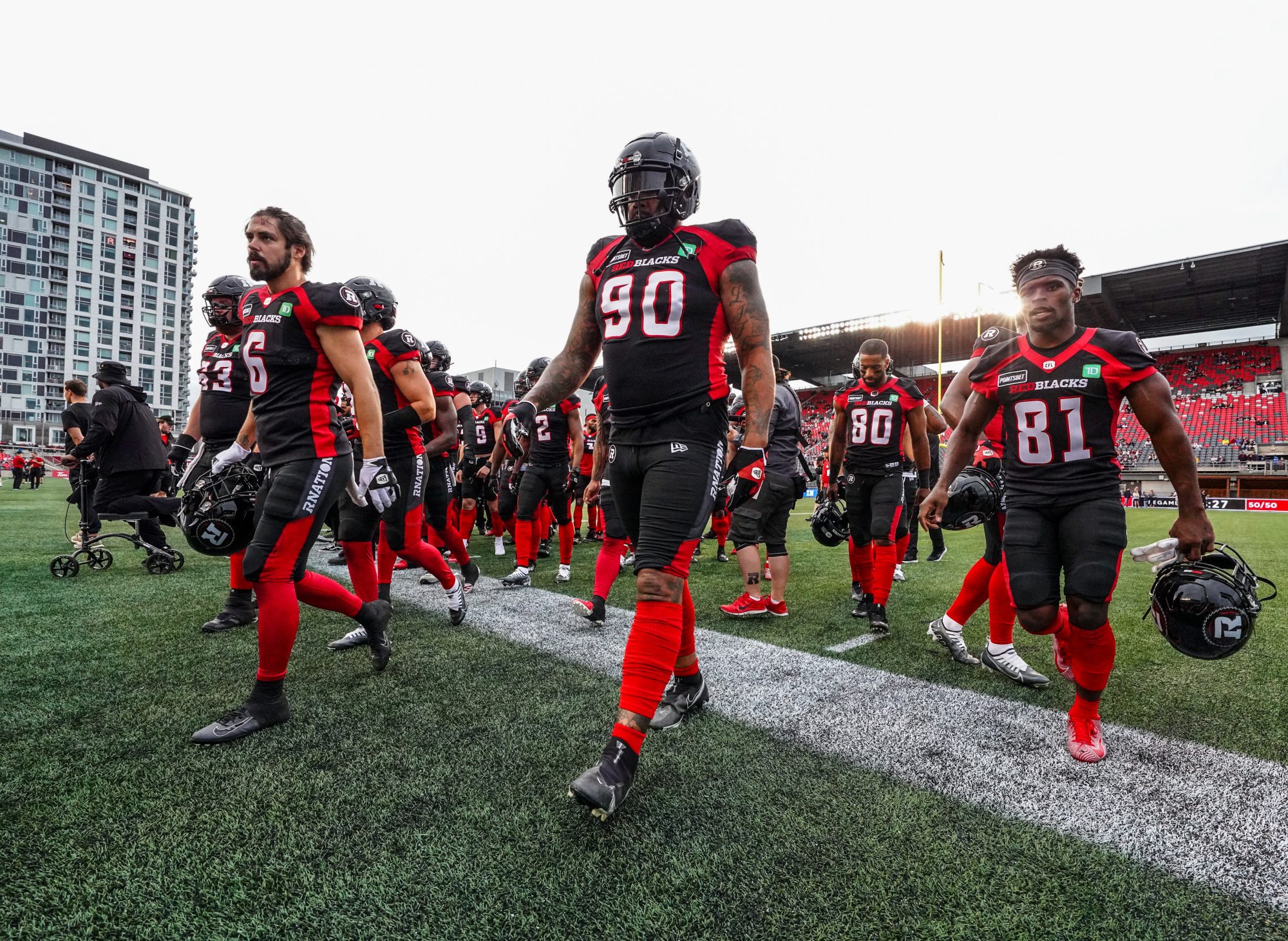 The Ottawa REDBLACKS know they’re close to putting it all together.

Despite bearing an 0-2 record, heading into their Week 3 bye, the REDBLACKS have shown flashes of greatness, and the argument could be made that they were the overall better team in their opening two matchups against the Winnipeg Blue Bombers.

Still, the team is unsatisfied with “almost’s”, and their leadership group knows that there is work to be done.

“I think we started off on the right foot. Unfortunately, we didn’t get the results we wanted,” said defensive lineman Cleyon Laing. “I think we have that bit of hunger, knowing we let them off the hook, and I think we’re ready to just get down and dirty when it comes to gameday.”

Laing, 31, knows a thing or two about what it takes to go from a good team to a championship-winner. The two-time Grey Cup champion has won with both Ottawa, and the Toronto Argonauts, and provides valuable experience to the REDBLACKS front four. Through 104 CFL games, he has recorded 174 tackles, and 36 sacks.

The key to a group taking that next step, however, lies not within individual performance, but a collective unit performing together.

As a veteran of the team, Laing admits to taking it upon himself to help maintain the standard set by defensive coordinator Mike Benevides, with whom he credits to fostering the attitude, and expectation embodied by the hard-hitting REDBLACKS defence.

Laing has been aided, though, by his positional group largely carrying over from last season, despite a reloaded Ottawa roster. He rejoins last year’s standouts in Davon Coleman, Praise Martin-Oguike, and Kene Onyeka up front, along with newcomers like Lorenzo Mauldin IV, and Tre Hornbuckle, both of whom got to Bombers quarterback Zach Collaros in last week’s home opener.

There are newcomers all over the field, though. One of whom is Mike Phair, who took over as REDBLACKS defensive line coach to begin the 2022 season. A constant source of energy, with loads of NFL experience, Phair has been a breath of fresh air for Laing, and the Ottawa “Rushmen”.

“It’s been great. He’s kind of been a refreshing part of my game, just kind of tuning me up, polishing me up again,” Laing said of his new coach. “I haven’t gotten some of the coaching that I’ve gotten from him in years, He’s very meticulous in how he coaches, which is a good thing, and I think we’re all benefiting from having him in the room.”

The theme of “renewal” is perhaps the one most befitting of Laing, and the REDBLACKS as a whole in 2022. The Edmonton, Alberta native described last year’s shortened season as a blessing in disguise, with the lessons it taught.

“I think for some people, it kind of humbled us, and I think I was one of those people. I knew I needed to put in work to get the results I wanted this year.”

From the early days of training camp, it was easy to see that Laing did, indeed, put in the work. He points to teammate Sherrod Baltimore helping to facilitate a place to train during the offseason as a major reason for coming into the season stronger, and more explosive.

There may also be something to the renewed sense of excitement in the nation’s capital, coming into the 2022 campaign. Newly-minted REDBLACKS general manager Shawn Burke wasted no time putting together a loaded roster through free agency, headlined by star quarterback Jeremiah Masoli.

As eager as fans may have been to see the new-look REDBLACKS in action, that perhaps went double for the players themselves, who Laing says couldn’t have been more thrilled with the job done by Burke, and the rest of the football operations staff.

It’s likely a major component of why the feeling is different around the team, despite finding themselves on the wrong end of the standings early in the season. With a group of veterans, most — if not all — of whom have been before, there is no sense of panic among these REDBLACKS.

“There’s a general buzz and general good feeling around all the movement that happened this offseason,” Laing said. “It’s just up to us to capitalize on it, and play the best football that we can.”

With the bye week providing a chance to rest up after two hard-fought games, the REDBLACKS will get back to work next week, as they prepare for the BC Lions to come to town on June 30. Laing says that RNation can expect to see the aforementioned hunger shine through, and that the team is looking forward to feeling the atmosphere at TD Place again.

“I think we have a gang of playmakers on our team to keep it exciting. It’s a new brand of football. We’re only looking forward, and we’re going to keep it going.”