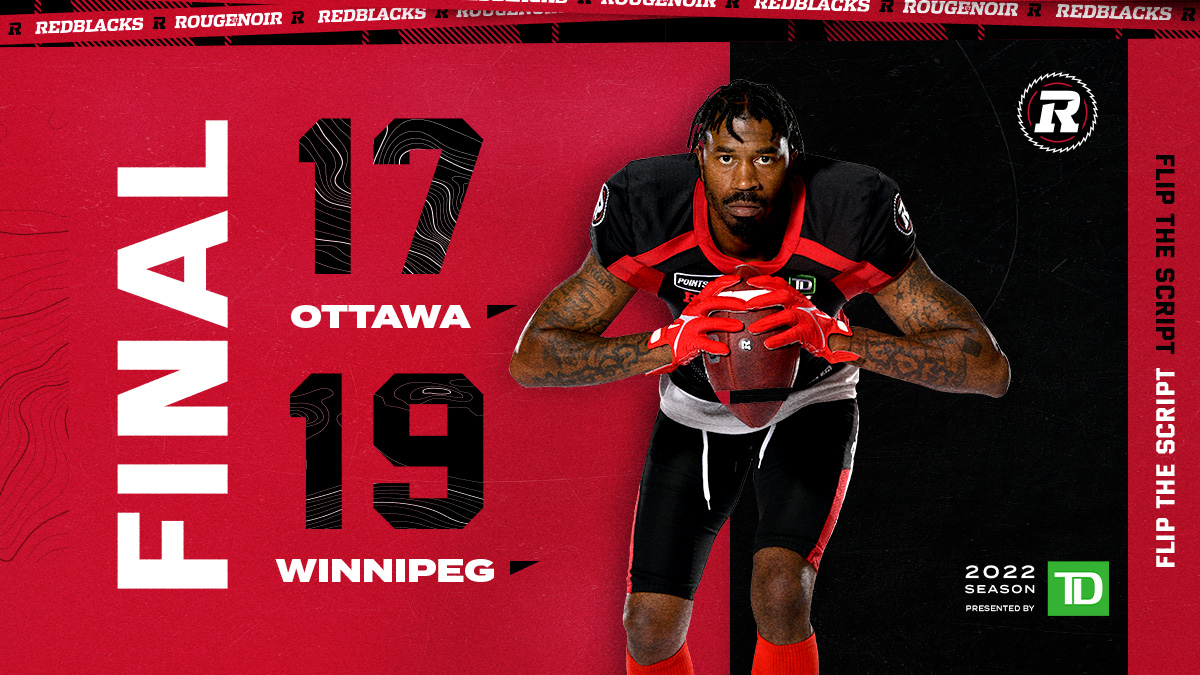 With a tough test out of the gate to begin the 2022 CFL season, the Ottawa REDBLACKS came agonizingly close to a statement win, but fell just short of a road victory over the Winnipeg Blue Bombers.

Ottawa held the lead for most of the game, thanks to a touchdown pass between Jeremiah Masoli and Shaq Johnson, combined with three Lewis Ward field goals, and a stellar effort from the defence, but a late Dakota Prukop touchdown, and last-second Marc Liegghio field goal allowed the two-time defending Grey Cup champions to narrowly escape with a 19-17 win.

After both defences earned early stops, a pass interference penalty set the Bombers up in Ottawa territory, and the reigning Most Outstanding Player Zach Collaros finished off the drive with a five-yard touchdown pass to Greg Ellingson. Liegghio made good on the PAT, and Winnipeg took a 7-0 lead.

Not to be outdone, Masoli and the REDBLACKS responded immediately. A 38-yard catch and run by Nate Behar, followed by a five-yard Devonte Williams run pushed Ottawa into the redzone. On the ensuing play, Masoli dropped a dime to Johnson in the endzone, each recording their first touchdown with the REDBLACKS, and Ward’s extra point tied the game at 7-7.

Early in the second quarter, Liegghio gave the Bombers the lead, with a 20-yard field goal, but the REDBLACKS again went toe-to-toe with the champs. Marco Dubois flipped the field with a career-long 54-yard reception on the next drive, and Ward knocked through a field goal of his own, making it a 10-10 game.

A Richie Leone punt was downed in the endzone, giving the REDBLACKS an 11-10 lead. After Justin Howell forced a fumble, recovered by Sherrod Baltimore, Ottawa almost expanded upon their advantage with a late drive into Winnipeg territory, but the clock ran out on them, and the REDBLACKS headed to the half with a one-point lead.

In the third quarter, Ward capped off an 11-play drive with his second field goal of the night, making it 14-10 in favour of the REDBLACKS.

Winnipeg regained the lead on a touchdown sneak by Prukop, but couldn’t convert on the extra point. The REDBLACKS again flipped the field with a 64-yard reception by Jaelon Acklin, and Ward’s third field goal of the night gave Ottawa a 17-16 lead.

Unfortunately, with time winding down, and Dru Brown replacing the injured Collaros at quarterback, Winnipeg was able to mount a last-minute drive, and a Liegghio field goal stole a 19-17 victory for the Blue Bombers.

Up Next: The REDBLACKS get another crack at the Bombers, next week, this time under the lights at TD Place, on Friday, June 17. Kickoff is scheduled for 7:30pm ET.