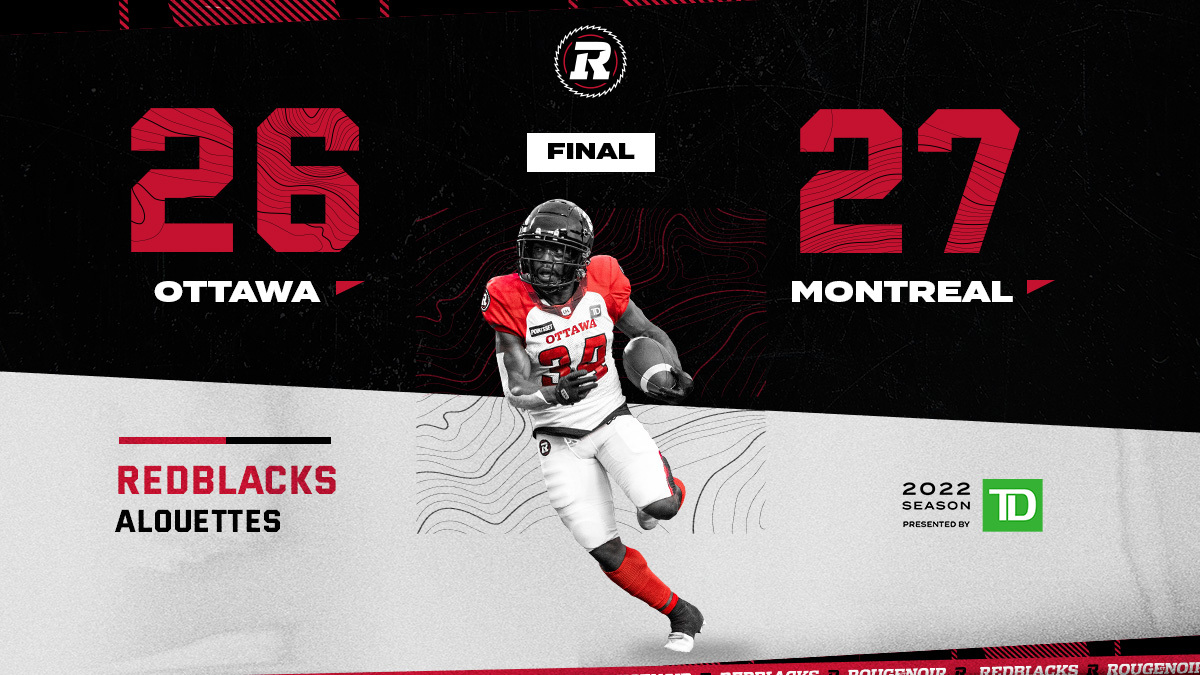 Despite a strong effort in their final test before the 2022 CFL regular season, the Ottawa REDBLACKS saw their lead slip away late, dropping a 27-26 decision to the Montreal Alouettes at Percival Molson Memorial Stadium.

Kicker Jose Maltos led the way for the REDBLACKS, knocking through five field goals, and quarterback Tyrie Adams recorded his second rushing touchdown in as many weeks.

Montreal capped off the first drive of the game with a Vernon Adams rushing score, and David Côte added a field goal soon after, but the remainder of the half would be controlled by the REDBLACKS defence, and special teams units.

Maltos kicked a 38-yard field goal through the uprights for Ottawa, and rookie Daniel Valente quickly got his team the ball back, with an interception of Adams.

Hakeem Bailey opened the second quarter with another REDBLACKS interception, and a drive led by Caleb Evans and Byron Marshall ended in another Maltos field goal, cutting the Alouettes’ lead to 10-6.

The REDBLACKS defence continued to torment Adams and the Montreal offence on the ensuing drive, with Alonzo Addae recording the third interception of the half, and once again giving the ball back to Evans and Co.

Maltos made good on another field goal try, cutting the lead to one, and with Trevor Harris in at quarterback for the Als, Bailey snagged his second pick of the night.

After another extended drive, Maltos gave the REDBLACKS a 12-10 lead with his fourth field goal. Montreal made a late push, but the Ottawa defence held firm, holding Montreal to three, and a 13-12 lead at the half.

Early in the third quarter, a Matt Mengel field goal pushed the Montreal lead to four points, but Maltos soon answered back, and his fifth in as many tries made it a 16-15 game.

A Mengel rouge gave the Als a two-point cushion, but with Tyrie Adams in at quarterback, the REDBLACKS were able to find some success on the ground. Following solid runs by the pivot, as well as running backs Devonte Williams, and Byron Marshall, Adams broke free for a 36-yard touchdown run, just over four minutes into the fourth quarter. Gabriel Ballinas made good on the point after try, and the REDBLACKS earned a 23-17 advantage late in the game.

With time winding down, quarterback David Moore found R.J. Harris downfield for a massive 46-yard reception, setting Ottawa up at the Montreal 22 yard-line. On the next play, Byron Marshall ran the ball to Alouettes’ five, almost breaking free for a touchdown, and a Ballinas field goal made it 26-17 in favour of Ottawa, just after the three-minute warning.

Dante Brown added a late field goal for Montreal, bringing the score to 26-20. A 54-yard reception by Fabian Guerra set up a two-yard touchdown run by Ryth-Jean Giraud, and the PAT gave the Als a 27-26 lead with 28 seconds to play, allowing them to escape with a 27-26 win.

Up Next: The REDBLACKS open the 2022 CFL season on the road, next Friday, against the two-time defending Grey Cup champion Winnipeg Blue Bombers, at 8:30pm ET.