REDBLACKS Come Back To Stun Als In Season Finale 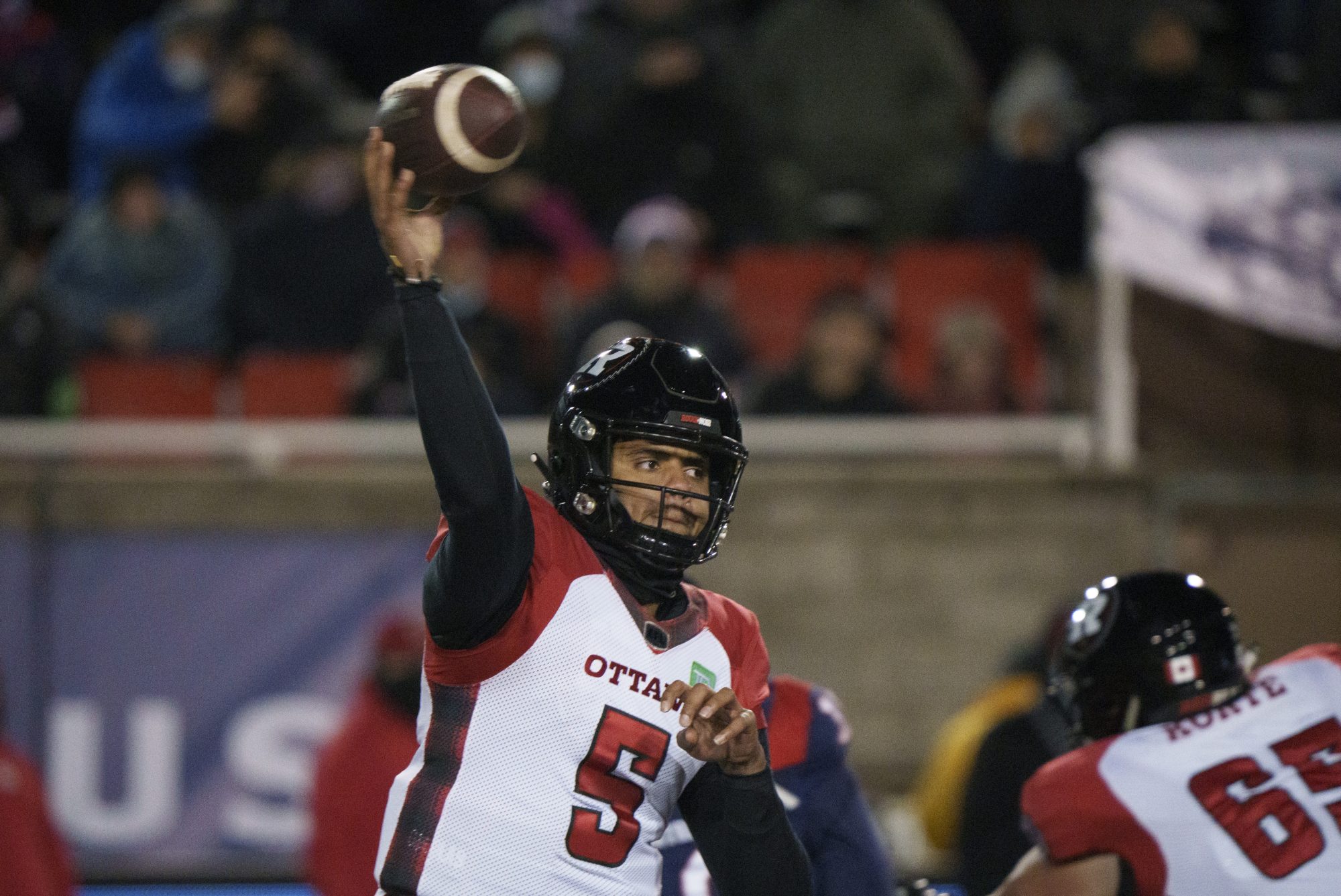 REDBLACKS Come Back To Stun Als In Season Finale

In their final game of the 2021 season, the Ottawa REDBLACKS proved that they were not a team with nothing to play for.

Trailing the Montreal Alouettes 18-3 at the half, the REDBLACKS blanked Montreal for the rest of the night, with the offence engineering a 16-point comeback for a 19-18 victory. Quarterback Caleb Evans threw for 173 yards, rushed for two touchdowns, and connected with receiver R.J. Harris for a pair of two-point conversions, with Lewis Ward notching three points on a first-quarter field goal.

Defensively, the REDBLACKS put on a clinic. Defensive lineman Davon Coleman led the charge, recording two sacks of Als quarterback Trevor Harris, and recovering two key fumbles that led to REDBLACKS touchdowns. Linebacker Avery Williams recorded a sack of his own, also forcing the turnover that led to Ottawa’s game-winning drive, with Micah Awe also getting to the quarterback.

The REDBLACKS opened the scoring less than five minutes in, when Ward capped off a solid opening drive with a 44-yard field goal. Montreal would return fire in the dying minutes of the quarter, though, with David Coté knocking through a field goal of his own, knotting this one up at 3-3.

Early in the second, Coté hit another from 47 yards, and the Als weren’t done there. Harris connected with receiver Jake Wieneke for a 14-yard touchdown, but Montreal wasn’t able to convert on the PAT, making this a 12-3 game.

Nevertheless, Harris again found Wieneke for a major with 58 seconds remaining in the half, but again, there was no extra point to be found, giving Montreal a 15-point lead.

It would be the last that the Als offence was heard from for the evening.

On the opening kickoff of the second half, Justin Howell forced a fumble that was recovered by Coleman, setting the REDBLACKS up at the Montreal 34-yard line. A couple of big runs by Evans and running back Timothy Flanders got Ottawa to the one-yard line, where Evans punched in a quarterback sneak. The REDBLACKS elected to go for two, and Evans found Harris in the endzone, cutting the deficit to 18-11.

Despite a back-and-forth second half, the Alouettes made their way to Ottawa’s 17-yard line with just three minutes to play. Appearing to imminently put the game out of reach, the REDBLACKS defence came through again. Williams forced another fumble, that was again recovered by Coleman, and with 2:31 to play, the REDBLACKS got the ball back with a chance to tie the game.

Evans connected with Kenny Stafford, Nate Behar, Harris, Flanders, and Jordan Smallwood for a total of 78 yards — Flanders himself picking up a massive 39-yard gain — to put the REDBLACKS in scoring position. From the Montreal 12, Flanders picked up 11 yards on the ground, before another sneak by Evans drew Ottawa within one.

Electing to go for the win, head coach Paul LaPolice sent the offence back on to the field for another two-point conversion attempt, and Evans found Harris in the endzone once more to give the REDBLACKS a 19-18 lead with 11 seconds remaining.

Fittingly, it was another fumble recovery that sealed the win for the REDBLACKS on the ensuing kickoff, recovered by Frankie Griffin. Evans kneeled twice, giving Ottawa a thrilling comeback win in their season finale.