It’s back-to-back home games for the Ottawa REDBLACKS, on the heels of a quick six-day turnaround. This time, it’s the second and final meeting between the REDBLACKS and the Edmonton Elks (2-4), whom Ottawa opened the season against with a 16-9 victory. The action begins at 7:30pm EDT, for what’s shaping up to be a great night at TD Place.

The REDBLACKS get another crack at winning on home field, following a 24-7 loss to the Hamilton Tiger-Cats on Wednesday, in a rain-soaked affair. The highlight of the night was a 63-yard punt return touchdown by DeVonte Dedmon, on a play that brought the members of RNation braving the elements to their feet in a raucous ovation.

After rebounding from an 0-2 start with back-to-back wins, the Elks find themselves sitting at 2-4. With starting quarterback, and former REDBLACKS star Trevor Harris suffering an injury, Taylor Cornelius got the start 10 days ago against the Winnipeg Blue Bombers. The 26 year-old went 19 for 33 for 243 yards, and three interceptions in what ended as a 34-22 Bombers win. He will be under centre again, tonight, against the REDBLACKS.

The Elks remain dangerous offensively, however, particularly in the running game. Lead back James Wilder sits second in the CFL in rushing yards, with 499 on the year, to go with two touchdowns. He has also tallied 163 receiving yards, and another touchdown in that respect.

Defensively, Edmonton boasts a fearsome pass rush that has caused problems for teams around the CFL, so the REDBLACKS will need to be sharp in protection.

Kenny Stafford, receiver, on advice he has for his two young quarterbacks: “I told them to have fun. Honestly, first time being in a professional football game, go out there, and have fun. Do what your coaches tell you to do, remember your assignment, alignment, and make the play.”

Paul LaPolice, head coach, on helping Evans and Christion prepare: “Just try to simplify pictures for them, and then let them go make plays. That’s what we’ve tried to do the last couple of days, and it’s a short week, but again, those guys were running stuff they’ve been running since training camp.”

Antoine Pruneau, safety, on trying to right the ship at the midway point of the season: “I want to make the city proud. I want to make those fans proud of what we’re doing here, and the work that we’re putting in, and develop that relationship that we had in the past with those fans.”
BROADCAST INFO 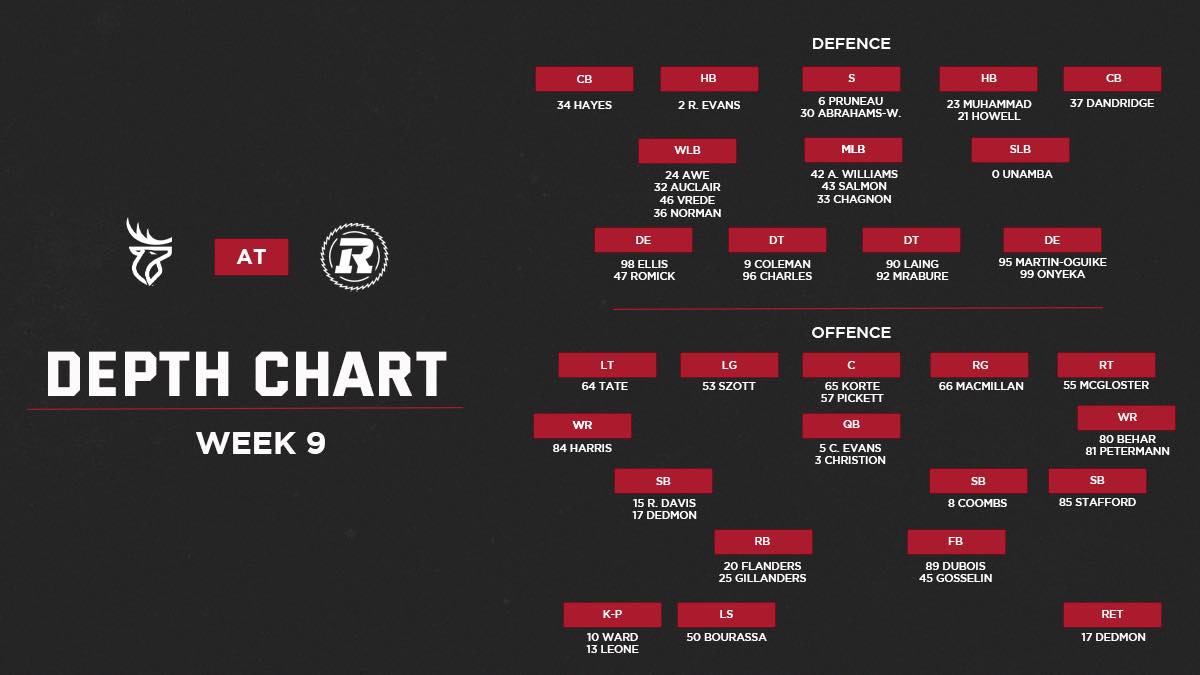