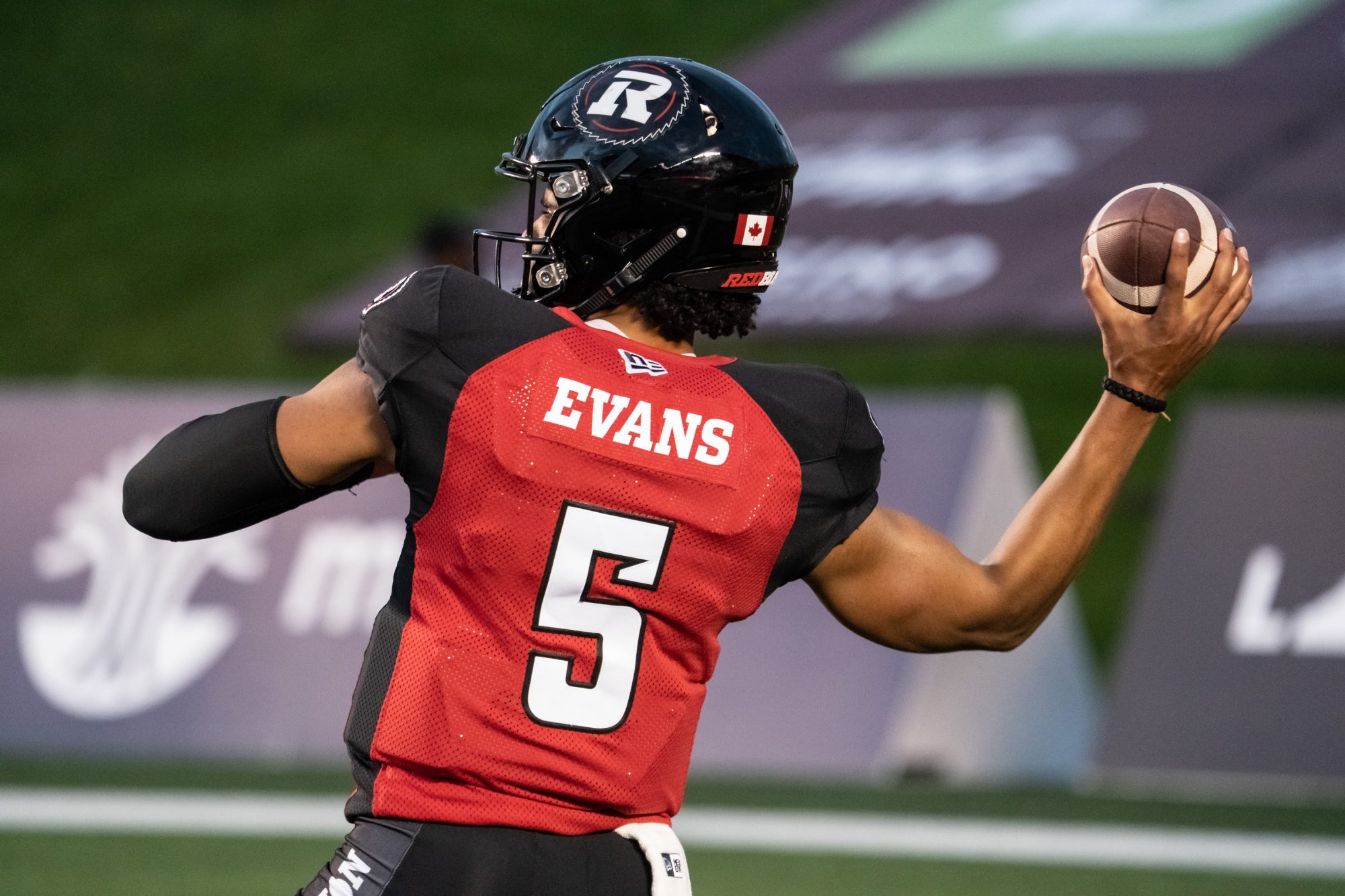 Thrust into his first career CFL start at the age of 23, quarterback Caleb Evans threw three touchdown passes to lead the Ottawa REDBLACKS to a 34-24 victory over the Edmonton Elks.

The rookie connected with receivers Ryan Davis, and Kenny Stafford (playing against his former team), as well as running back Timothy Flanders to put 21 points on the board. Star kick returner DeVonte Dedmon added his second punt return touchdown in as many weeks, and kicker Lewis Ward chipped in two field goals.

Defensively, linebacker Don Unamba forced a critical fumble early in the game, and it was recovered by safety Antoine Pruneau – in his 100th career CFL game – who also sealed this one with an interception of Elks quarterback Taylor Cornelius in the dying minutes.

The REDBLACKS came roaring out of the gate, off to their best start of the season. The game’s opening drive was accentuated by an Evans lateral pass to Davis, who fired a 37-yard strike to Stafford, setting Ottawa up at the Edmonton 20-yard line. On the ensuing play, Evans found Davis in the endzone, and Ward converted the extra point to make it 7-0 REDBLACKS.

Ottawa’s momentum didn’t stop there. The Elks’ first offensive play was a four-yard completion from Cornelius to former REDBLACKS receiver Greg Ellingson, but Unamba forced a fumble. Pruneau recovered the loose ball, and positioned the REDBLACKS offence on the Edmonton 31-yard line.

After Evans gashed the Elks on a 17-yard run, he hit Flanders with a textbook screen pass, and the Ottawa running back barreled his way into the endzone for a 15-yard score, putting the REDBLACKS up 14-0, less than five minutes into the game.

The REDBLACKS defence stepped up in the second quarter. Linebacker Avery Williams stuffed Elks running back James Wilder for a two-yard loss, and his compatriot Micah Awe made a huge play on second down to pin Edmonton deep in their own territory.

A stellar return by Dedmon had Ottawa in business once again, and an eight-yard completion from Evans to R.J. Harris teed up a 15-yard field goal by Ward, and a 17-point lead for the REDBLACKS.

Edmonton would get one back late in the first half, with Cornelius throwing a 77-yard touchdown to Shai Ross, cutting the REDBLACKS lead to 17-7 heading into the midway break.

A defensive stand accentuated by a Unamba sack to open the third quarter had Ottawa in business again. The series was capped off by a 73-yard punt return touchdown by Dedmon, and number 17 brought RNation into a frenzy for the second week in a row. Ward was flawless on the convert, and the REDBLACKS extended their lead to 24-7.

The Elks answered soon after, with an 18-yard touchdown pass by Cornelius to Ellingson, bringing this one to a 10-point game.

Again, though, the REDBLACKS defence stood tall, with defensive back Brad Muhammad exploding through the line of scrimmage, making a tackle for a five-yard loss. They’d hold the Elks to a 48-yard field goal by Sean Whyte, making it 24-17 REDBLACKS.

Dedmon would immediately flip the field, however, with a 42-yard kickoff return into Elks territory. Runs by Evans, and Flanders, followed by a 17-yard completion to Davis set up another Ward field goal, this time from 32 yards, restoring the 10-point REDBLACKS lead.

With the Elks looking to return fire, Cornelius took a shot at the endzone from the Ottawa 26, but defensive back Brandon Dandridge made a sensational diving interception, returning the ball to the REDBLACKS.

It would be all REDBLACKS from there. After a huge sack by Avery Ellis took the Elks off the field, Evans found Stafford in the endzone for a seven-yard touchdown, and pushed the Ottawa lead to 34-17.

The Elks found paydirt again to cut into the deficit, but fittingly, it was an interception by Pruneau that sealed this one in the dying minutes of the fourth quarter, securing a 34-24 victory for the REDBLACKS.

UP NEXT: The REDBLACKS roll into Toronto to take on the 4-3 Argonauts on Wednesday, October 6, for a 7:30pm EDT kickoff.