REDBLACKS Look To Even The Score Against The Lions In Bc

REDBLACKS Look To Even The Score Against The Lions In Bc

After wrapping up a two-game home stand, the Ottawa REDBLACKS (1-3) will look to head into their 10-day break on a high a note, when they kickoff against the BC Lions (2-2) in Vancouver on Saturday night, at 10pm EDT.

It is the second and final meeting between the REDBLACKS and the Lions of the 2021 CFL regular season. The two teams faced off just a couple of weeks ago for Ottawa’s home opener, a game in which the Lions walked out with a 24-12 win.

The REDBLACKS are a different team than the Lions faced in Week 4, however. Despite a tough loss to the Montreal Alouettes last week, quarterback Dominique Davis powered Ottawa to an offensive explosion, in which they scored 29 points on three touchdowns, and earned 313 passing yards. Stoney Creek, Ontario native Daniel Petermann led the way for the receiving core, catching two touchdowns on 77 yards, while standout R.J. Harris tallied another.

On defence, it was outside linebacker Don Unamba recording a team-leading six tackles, with middle linebacker Avery Williams adding another four to his league-leading total of 32. Defensive lineman Praise Martin-Oguike was wreaking havoc in the Montreal backfield all game, ending the night with two sacks.

The Lions haven’t played since their matchup with the REDBLACKS on August 28th, enjoying a bye week while Ottawa took on the Als. During the August 28 game at TD Place, quarterback Michael Reilly threw for 301 yards and a touchdown, and rushed for another. Jevon Cottoy was the team’s leading receiver, racking up 93 yards and hauling in a touchdown grab.

Defensively, linebacker Jordan Williams was tied with compatriot Boseko Lokombo with a game-high eight tackles, and also logged an interception.

Perhaps the Lions’ most valuable player in their matchup with the REDBLACKS was kicker Jimmy Camacho, whose three field goals gave BC the 12 points that would ultimately put the game out of reach. It’s a matchup that will likely be a critical one again this week, with Ottawa kicker Lewis Ward; who is tied for third in the CFL with 10 made field goals, and has missed only one on 11 attempts this season.

Dominique Davis, quarterback, on earning another opportunity to lead the REDBLACKS: “I’ve just been working my butt off, just waiting for that opportunity to come, if it ever came. Nothing’s ever guaranteed in this league, so I just made sure I went all out every day, and waited for my turn. I want to go out there and show this team, and the city that I’m ready.”

Paul LaPolice, head coach, on Davis’ performance against the Alouettes: “I think he responded. He took us on a long drive for a touchdown, then they scored a touchdown right before [the end of the first half]. We went down and responded, completed some passes and were able to get a field goal right before the half. So we moved the ball, it’s combination of him and everybody around him, but he did a good job of putting us in positions to have success.”

Timothy Flanders, running back, on returning to the lineup after missing two games with an injury: “I’m just I’m glad to be back, hopefully I can bring an extra spark back to the offence, and get these guys ready to go.” 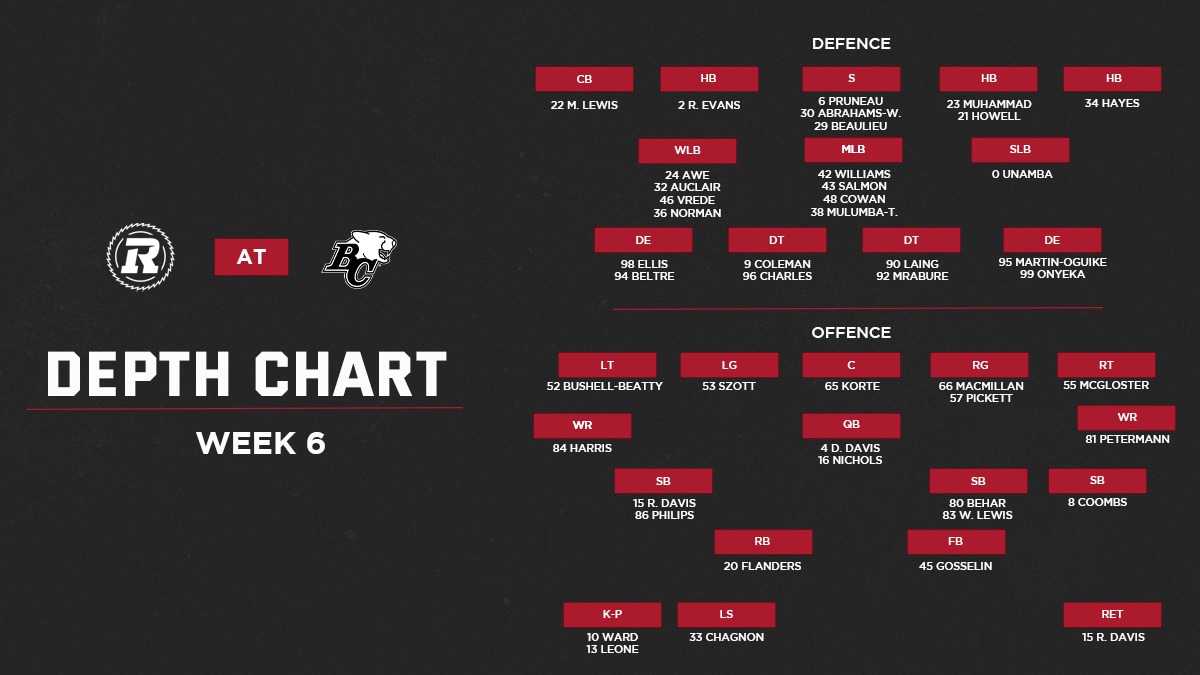