It’s Another Family Affair For Coach Dyce Against The Lions 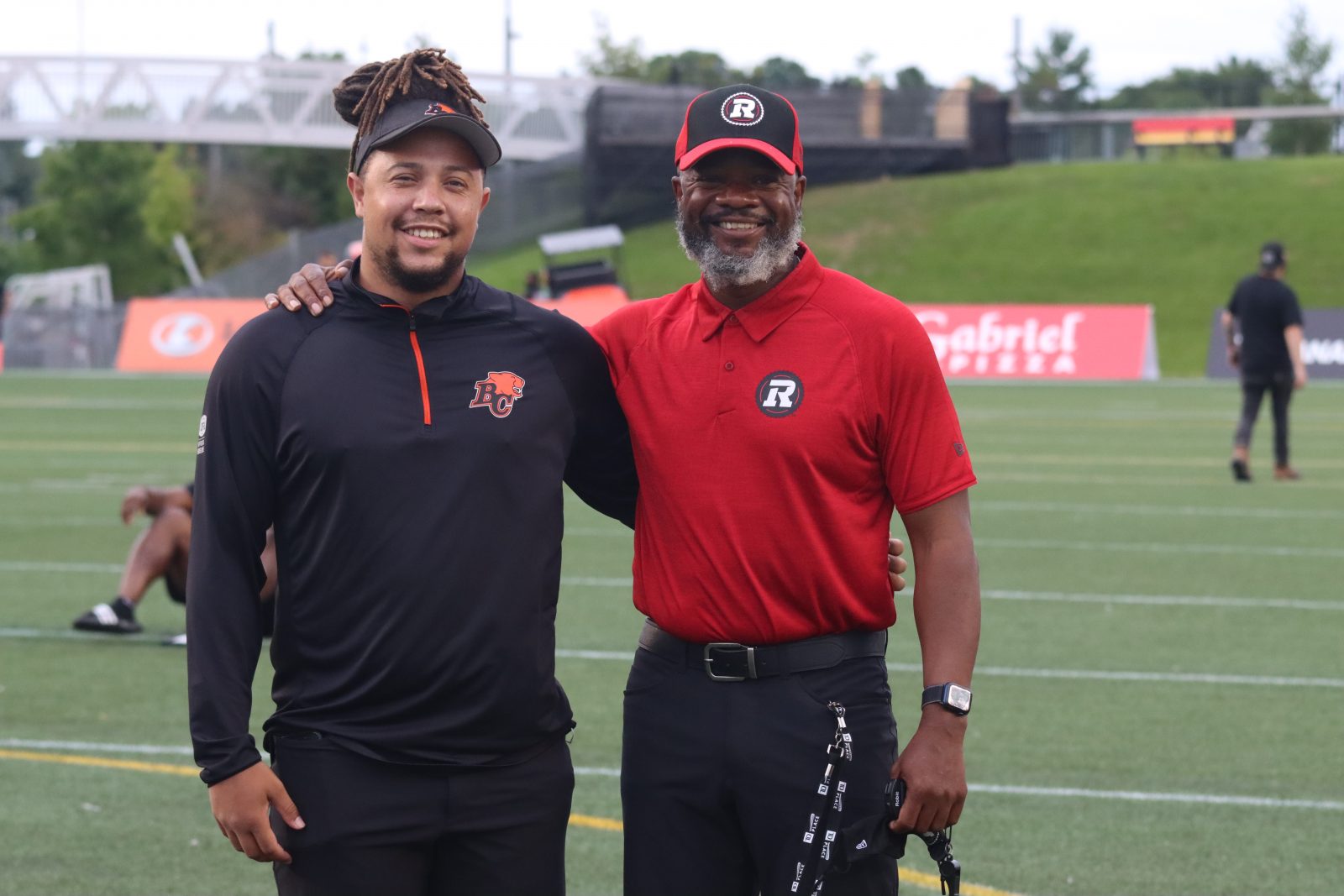 It’s Another Family Affair For Coach Dyce Against The Lions

When the Ottawa REDBLACKS face off with the BC Lions for the second time this season, on Saturday, it will be more than a rematch between two talented football teams.

REDBLACKS special teams coordinator Bob Dyce faces a familiar opponent, not only in the Lions, but in his son, Trysten, who serves as BC’s running backs coach. For the elder Dyce, though, it’s just another football game.

“Maybe it’s a little emotional before the game, but even two weeks ago, it turns off pretty quick,” he said, “I never think about who’s on the opposite staff. All I’m trying to do is put our team in a position to win. It’s really just game two vs BC.”

Despite both parties primarily being focused on getting a win for their respective teams this Saturday, father and son will still make some time to catch up and reconnect over the weekend; opportunities that become increasingly rare in the midst of a condensed CFL season, spent on opposite ends of the country.

“It’ll be a great opportunity for him and I to spend a couple minutes together, and talk about a few things, talk about family. His [younger sister Ava] starts high school today, and things like that. Getting caught up on different things,” said Coach Dyce, “The personal part of it, we’ll take care of that this evening, and maybe in the morning tomorrow, have breakfast together. So that’ll be nice. It’s always great to see him.”

While family, of course, comes above all else in the Dyce clan, football has always been a family affair. Bob played wide receiver for the University of Manitoba Bisons, before coaching at his alma mater, and finding his way to the CFL in 2003, as the receivers coach for the Winnipeg Blue Bombers. Dyce would later move on to the Saskatchewan Roughriders as their special teams coordinator, winning the 101st Grey Cup in 2013, and later serving a stint as the team’s head coach. Dyce moved on to Ottawa in 2016, helping the REDBLACKS to their own championship in 2016.

Trysten’s path was somewhat similar, having played at his dad’s school, and also lining up at receiver. Still, some key differences remain between the two, and their respective paths to the CFL.

“I think he always had an inclination to coach, whereas myself as a player, I was probably someone who said they were never going to coach, and grew to love it,” the REDBLACKS coach explained, “Whereas, again, he’s probably more cerebral, and understood more of the background, and the underpinnings of the game before I did.”

Dyce points to his son’s recollection of the family’s tenure in Winnipeg, when a young Trysten spent a considerable amount of time with his dad, and the Blue Bombers. It was hanging around the likes of Milt Stegall, Romby Bryant, and Derek Armstrong that helped to stoke what became a family love of the game.

“From what I understand, he was kind of like a player’s coach when he was [at Manitoba], but I guess our paths are similar in the fact we both played junior football, we both played in a Canadian Junior Championship – he won, I lost – then went on to university. His transition to coaching was just a little bit quicker than mine.”

The Dyce family bond over football has remained steadfast, even over considerable distance. Bob admits to being in Regina for most of Trysten’s high school career, but points to 2013 – when his son lived with him for the year – as being particularly special. It was in that year when Bob was able to see his son emerge as a key contributor on a Canadian Bowl-winning team, and himself win the Grey Cup soon after.

Family pleasantries will have to be put on the pause when the REDBLACKS and Lions kickoff in Vancouver on Saturday, at 10pm EDT. Ottawa will look to head into a 10-day respite by entering the win column, and it will take a strong effort in all facets of the game to do so.

“At the end of the day, the biggest opponent you face, a lot of times, is yourself. If you’re prepared, and confident in your ability, you should be able to go out there and execute,” Coach Dyce said, “We know our job, obviously we study our opponent, but at the end of the day, we worry about us, and doing the things that lead us to success.”

Just don’t expect the father to take any extra motivation from going against his son.

“I just want to prepare, and put the guys in the best position possible so that we can be successful. I know it’s not the answer that most people would look for, but that’s how I approach things.”