The Ottawa REDBLACKS are going to be well-acquainted with the Montreal Alouettes (1-2) this season, with four meetings between the two East Division opponents on the schedule. Ottawa will look to gain the early advantage in the season series, when the Als roll into TD Place for a 7:30pm EDT kickoff on Friday night.

The REDBLACKS dropped a 24-12 decision to the BC Lions in last week’s home opener, but progress was made on both sides of the ball. Quarterback Matt Nichols threw for a season-high 206 yards, and the defence sacked Lions pivot Michael Reilly twice, while only surrendering two touchdowns, despite missing five starters. Linebacker Avery Williams remains tied for the league lead in tackles, with a total of 28, even having played one less game than the vast majority of his competitors.

Montreal, meanwhile, is coming off of consecutive losses to the Calgary Stampeders and Hamilton Tiger-Cats, respectively, after a convincing season-opening win over the Edmonton Elks.

Quarterback Vernon Adams has thrown for 643 yards on the year, and running back William Stanback has the third-most rushing yards in the CFL, with 234.

The Alouettes do pose some danger on special teams, as returner Mario Alford is currently the only player in the CFL to run a kick back for a touchdown this season, taking an 85-yard punt return to the house against Edmonton.

The last game that the REDBLACKS played before the COVID-19 pandemic was against the Alouettes at TD Place, on November 1, 2019.

This will be the REDBLACKS’ first Friday Night Football matchup since October 11, 2019: a total of 694 days.

Matt Nichols, quarterback, on the mentality needed to get back in the win column: “It’s just trusting ourselves, trusting the abilities of all the guys out here, and just kind of relaxing and playing and doing things you can do. That’s really what it comes down to, for me. We all know there’s some plays out there we all could have made, and that’s what the difference in the game is, so for us it’s just making sure we come up with those plays we’re supposed to make.”

Brad Muhammad, defensive back, on battling through adversity to earn his first career CFL start against BC: “It was amazing. It’s been a long two to three years for me, and this has been a long, long time coming. The guys have prepared me, the coaches have prepared me, and like I said, I’ve been taking first team reps since Week 1, and my time wasn’t called. But having a solid veteran group, and a solid coaching staff, I knew would be prepared when my time was called so there was no pressure.”

Paul LaPolice, head coach, on what he expects out of his team against the Alouettes: “I want us to be consistent. ‘Consistency breeds execution, execution breeds success’ is the thing I say all the time, so let’s get consistent, and then we’ll be put in a position to be successful.” 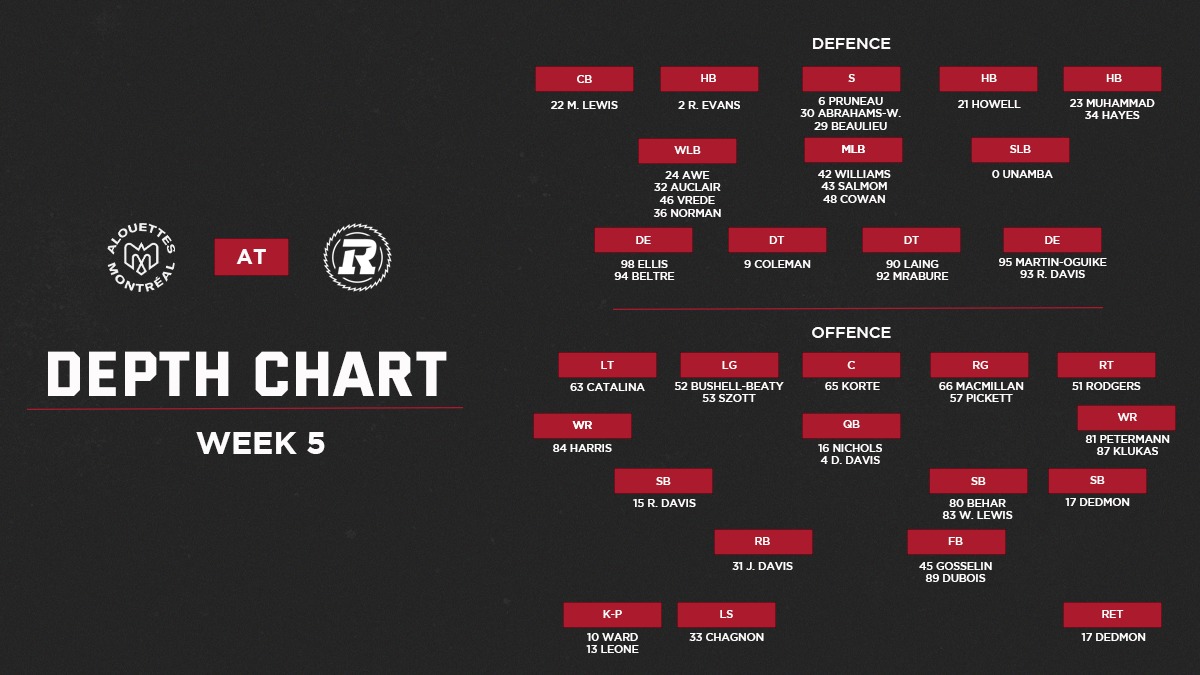