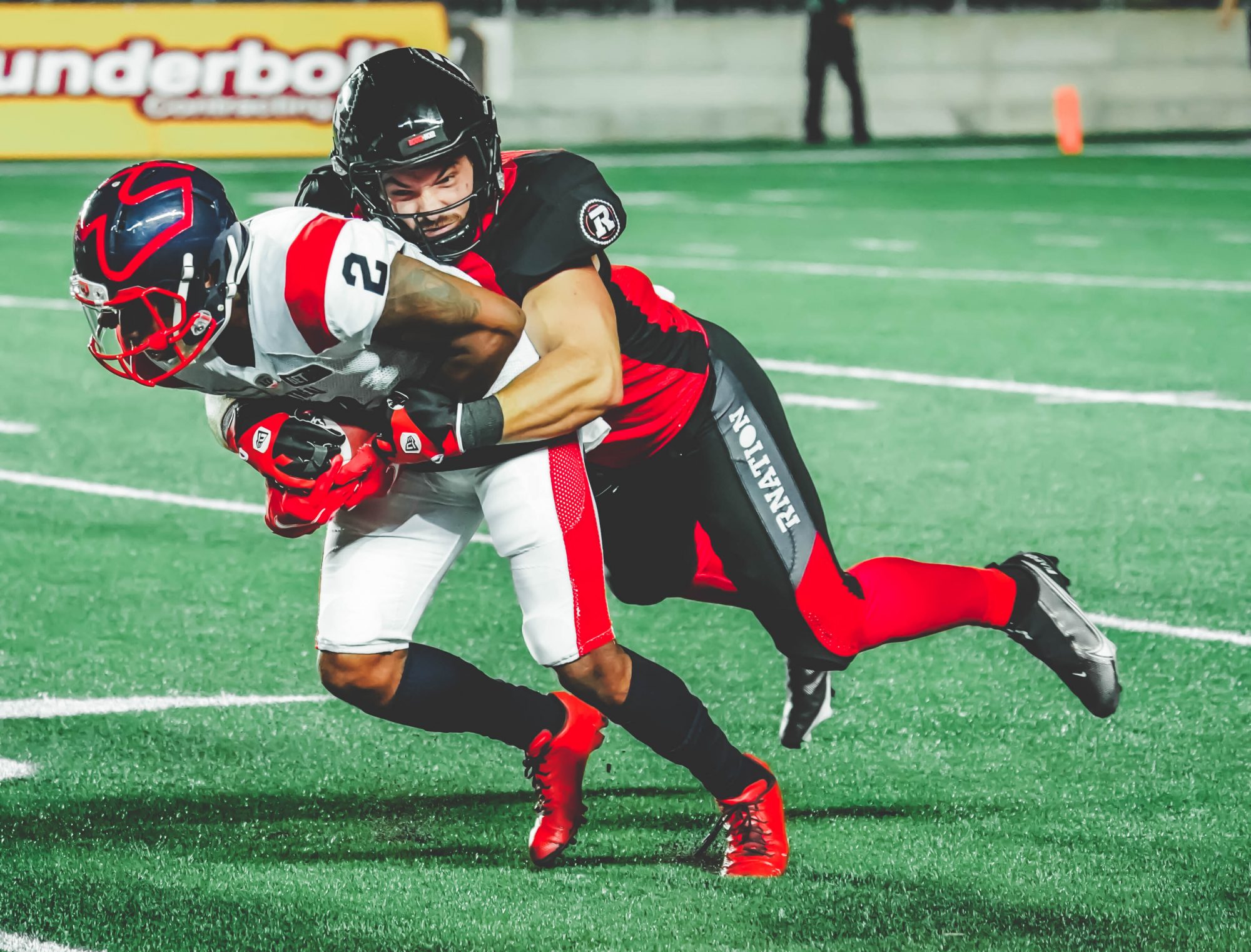 Despite their best offensive performance of the season, the Ottawa REDBLACKS weren’t able to come away with a home win over the Montreal Alouettes. Quarterback Dominique Davis, who took over in the second quarter, went 22/32 for 280 yards, and two touchdowns, also rushing for a touchdown. Receiver Daniel Petermann led the team with two touchdown receptions and 64 yards, but the Alouettes ultimately came away with a 51-29 win.

The game’s first drive appeared to see the REDBLACKS get off the field with a two-and-out, but a pass interference call kept the drive going for the Als, and after a total time of 5:12, Montreal kicker David Côté drove a 27-yard field goal through the uprights to open the scoring.

A REDBLACKS defensive stand forced a Côté miss from 50 yards shortly after, but an Ottawa turnover handed Montreal the ball back, and it was Als quarterback Vernon Adams connecting with receiver Eugene Lewis for a 34-yard touchdown pass to make it 10-0 Alouettes.

DeVonte Dedmon immediately logged a response for the REDBLACKS, however, returning the ensuing kickoff for 75 yards, deep into Montreal territory. Kicker Lewis Ward capped the drive, and the first quarter off with a 31-yard field goal of his own, cutting the Ottawa deficit to seven points.

Côté would hit another field goal from 37 yards out early in the second quarter to make it a 13-3 game, but the Als would expand on their lead not long after. 8:04 into the quarter, the REDBLACKS were pinned deep in their own territory by another pass interference call, and Adams hit receiver Jake Wieneke from nine yards out for the touchdown, and a 20-3 Montreal lead.

Ottawa, now with Davis in at quarterback, drew back into the fight with a nine-play drive, featuring key receptions from Ryan Davis, Dedmon, and Michael Klukas. Finally, Davis connected with Petermann for a five-yard touchdown pass, sending TD Place into a frenzy. Ward nailed the extra point, and the score was cut to 20-10.

The Alouettes retaliated with another big play, with Adams hitting Lewis for a 39-yard score, but Davis again took the REDBLACKS all the way down the field, receiver Nate Behar in particular making three receptions for a total of 30 yards. Ward was perfect on a 40-yard attempt, sending us to halftime with the score 27-13 in favour of Montreal.

Called upon early in the second half, the defence came up with a huge stop. Defensive lineman Praise Martin-Oguike sacked Adams, and forced a Côté miss, but the Alouettes would soon tack on more points with another Wieneke passing touchdown, and a pick six by Patrick Levels, pushing the score to 41-13.

The REDBLACKS defence were able to tally some points of their own, with Martin-Oguike recording another sack, this time for a safety.

Not going down without a fight in the fourth quarter, Davis connected with Dedmon for an electric 44-yard passing play to the Als one-yard line, and the quarterback snuck the ball across the goal line himself for a REDBLACKS touchdown, making it a 41-21 game.

After another Alouette touchdown, Davis again hooked up with Petermann for his second score of the day, and then found R.J. Harris for the two-point conversion, bringing the score to 48-29, before a late Montreal field goal gave us our final score.

“There’s a lot of positivity because we know where we made mistakes. It’s about mistakes, we’re young,” said linebacker Micah Awe, “It’s just up to what we’re going to do in the future, and it can go either way, but that’s just life.”

Awe was optimistic about his team’s ability to bounce back from the loss.

“It’s going to be amazing when it all happens. Y’all just stick around.”

The REDBLACKS will look to make it happen when they visit the BC Lions next Saturday, for a 10pmEDT kickoff.

Dominique Davis also finished the game tied with running back Justin Davis for the team lead in rushing yards, with 38.

Lewis Ward was again perfect in the field goal department, going 2/2 for a total of 71 yards.

Linebacker Don Unamba was tonight’s team leader in tackles, recording six, but positional comrade Avery Williams added four of his own, leading the entire CFL with 32.

Praise Martin-Oguike’s two sacks pulls him into second place in the league, with four on the year.

DeVonte Dedmon had another electric night in the return game, logging 205 yards on kickoffs.