Saturday Showdown against the Roughriders

Saturday Showdown against the Roughriders

After a well-earned bye week following their 16-12 victory over the Edmonton Elks in Week 1, the Ottawa REDBLACKS look to improve to 2-0 on the 2021 CFL season, when they visit the Saskatchewan Roughriders (2-0) on Saturday night.

Ottawa is coming off of a dominant defensive performance, in which they sacked former REDBLACKS quarterback Trevor Harris three times, and also logged three interceptions. Defensive back Abdul Kanneh led the way with two picks, scoring the game-winning touchdown on his second, while linebacker Avery Williams racked up a team-high 14 tackles and a sack. Defensive back Randall Evans sealed the game late in the fourth quarter with an interception of his own.

Offensively, the REDBLACKS played responsible football, never turning the ball over once. Quarterback Matt Nichols finished the night with a completion percentage of 60, and running back Timothy Flanders recorded 39 rushing yards. Receiver Ryan Davis appeared to have the highlight of the night, taking a lateral pass on a punt return all the way to the endzone, but the play was called back when a video review deemed it an illegal forward pass.

Ottawa will look to build on their steady performance, and increase their output on the scoreboard when they roll into Mosaic Stadium for a 7:00pm EDT kickoff, Saturday night.

Defensive lineman Jonathan Woodward, who had three sacks and a forced fumble in the victory over Hamilton, was named the CFL’s Second Performer of Week 2. Quarterback Cody Fajardo; throwing for 222 yards and a touchdown, while also recording another touchdown on 66 rushing yards against the Ti-Cats, was named Third Performer.

The last time that the REDBLACKS visited Saskatchewan was on August 24, 2019, in a game that the Riders took by a score of 40-18. Just eight weeks earlier, however, Ottawa earned a 44-41 decision at TD Place. Receiver R.J. Harris logged 51 yards and a touchdown on five receptions, while kicker Lewis Ward went six-for-six, putting 18 points on the board for the REDBLACKS.

The REDBLACKS and Roughriders are currently tied in the all-time regular-season series, boasting six wins apiece, so bragging rights are on the line on Saturday night.

Ottawa has enjoyed a 2-0 start to the CFL season on three occasions; in 2019, 2016, and 2015, respectively, with the REDBLACKS also earning a Week 2 win against Saskatchewan just two years ago.

Including playoffs, Matt Nichols boasts a career record of 10-4 against the Roughriders.

REDBLACKS head coach Paul LaPolice knows Saskatchewan well; having served as the Riders’ receivers coach in 2007, and their offensive coordinator from 2008 to 2009.

In their own words:

Micah Awe, LB, on former BC Lions teammate Cody Fajardo: “What I noticed about him was, no matter if he was third string or second string, he was always focused. So I knew that when he finally got a chance to start, he was going to go all in, because he’s been waiting for his moment. He’s going to be focused, but so are we…he’s going to make his plays, but we’re going to make our plays too.”

Paul LaPolice, Head Coach, on the REDBLACKS’ early-season bye week: “I think it was an advantage for us because we have a lot of new players, so it was really good because we’re all here. The guys got to spend time together, we got to have a couple of extra practices, got to see some other games throughout the league, and just work on our craft and developing our culture, and our team. So I thought it was awesome.”

Matt Nichols, QB, on increasing the offensive production in Week 3: “We just need to execute every play as an offence and not take our turns making mistakes. We got that first game out of the way, and an extra week of practice here. I feel like the offence has been clicking during the bye week and this week, so we look forward to the challenge of going and playing against a good football team, in a tough environment. 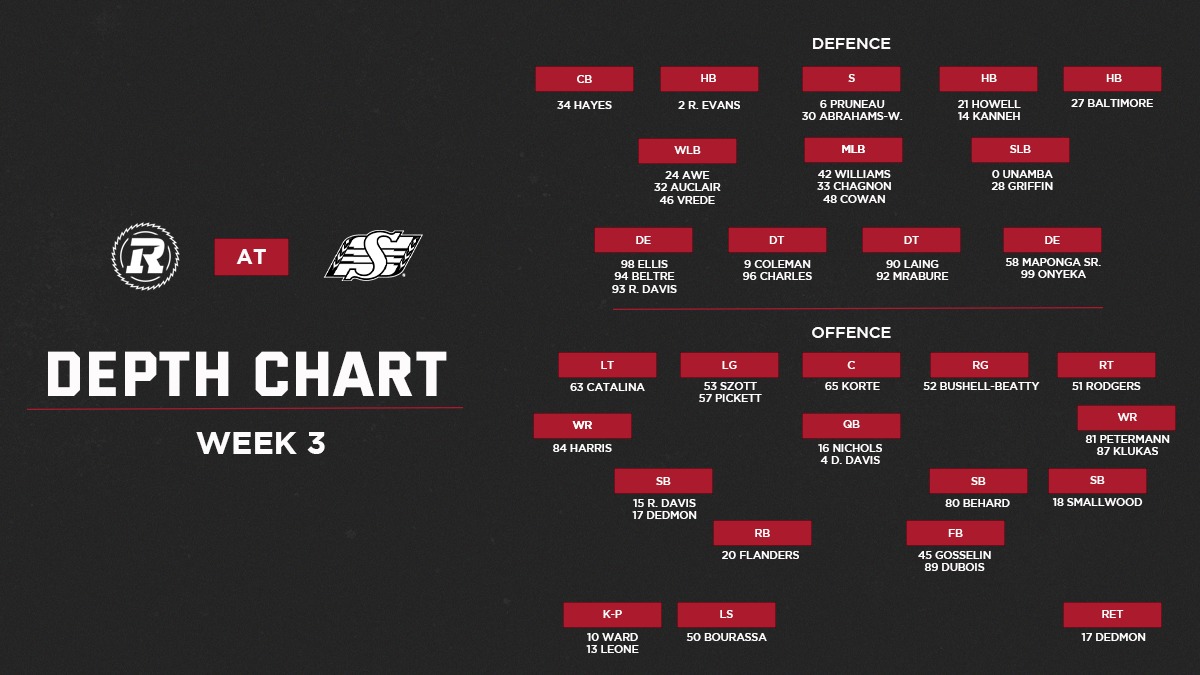