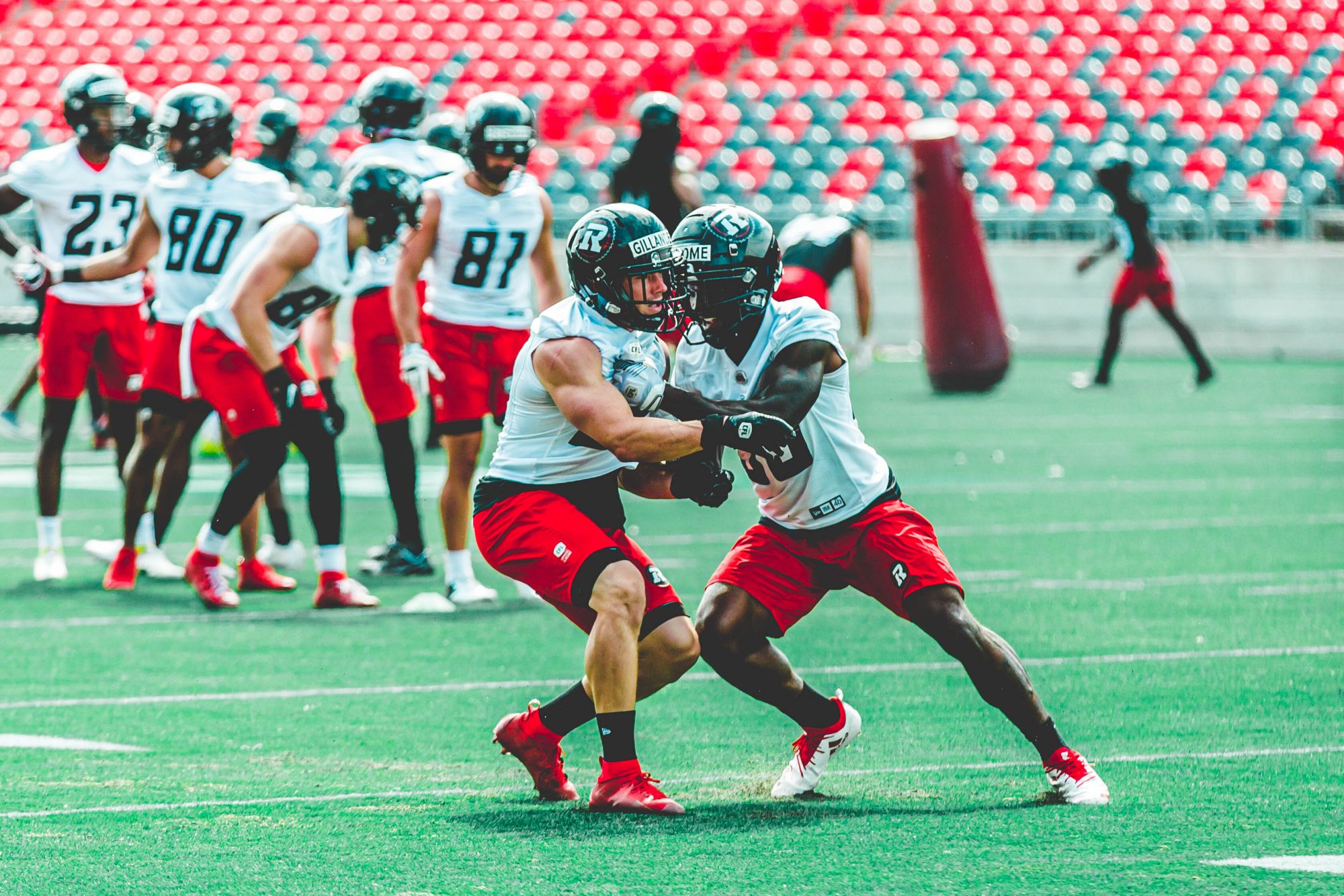 Splashy start to the week: Has the REDBLACKS offence heard the media talking about the defence being the loudest on the field so far during training camp? On Monday, the guys wearing white jerseys got a bit of payback. First, the group huddled together, but unbeknownst to everyone else, there was a cooler full of a water balloons hidden by the group. It quickly turned into an O vs. D ambush (though QB Dominique Davis seemed to be getting hit from both sides), before the defensive side stole the cooler and re-launched the attack. The minute or two of tomfoolery was a way to kick off Week 2 of camp on a light note. “It was the players – they said they had something to do to lighten things, I said sure, it’s their team. A little water balloon fight to start … it was good,” said Head Coach Paul LaPolice.

Week 2: The second week of camp officially started on Monday, though you’d be forgiven if you, like some of us, have now completely lost track of the days. The focus also doesn’t shift a lot just yet in terms of what Coach LaPolice and his staff are focusing on. “You’re still trying to install stuff today,” he said as new players continue to learn a new system. “Today we did some second and extra stuff and long yardage stuff and some situational football.”

Picture day: While REDBLACKS video master Josh O’Connor spent much of today taking player photos to use during game broadcasts, the word picture was also being used a bunch in LaPolice’s post-practice media availability. A picture, in that context, is essentially what the quarterback or receivers or running backs are seeing as the play begins and develops. The look, if you will. For young players, especially, seeing those pictures over and over again, not to mention lots of video work, is key for the learning process. “You;re just teaching them to see the picture;. If you see this picture go ahead and throws this ball. They’re young, they just have to see way more pictures. They’re both promising guys,” LaPolice said of his two rookie QBs in camp, Taryn Christian and Caleb Evans.

The first cut: Monday evening at 10 PM was the CFL deadline to reduce team rosters from the 100ish currently in camp. See the list of players released here.

Reps, reps and more reps: Don’t read much into the lighter load of passing reps veteran QB Matt Nichols has had the last couple days. With no rookie camp and no pre-season games, the coaches and scouts need to evaluate the younger quarterbacks in camp. Dominique Davis is getting plenty of work, too. Nichols, meanwhile, knows that LaPolice system. “Some of the situation stuff, Matt has done with me for three or four years,” said the coach.

Back at last: While everyone is happy to be out there, perhaps few more so than rookie linebacker and hometown Ottawa boy Dan Basambombo. Basambombo, who played university football at Laval, didn’t suit up for his last year of eligibility and then the pandemic derailed what could have been his CFL rookie year. “It’s been two-and-a-half years…it feels good to be back.”

Listen: Linebacker Avery Williams is a prominent voice on the field because A) he’s middle linebacker position demands it and B) he’s a master energizer and chirp machine. He’s also a stellar interview, as he showed once again while joining AJ Jakubec and Lee Versage on TSN 1200 Monday. Listen here.

The REDBLACKS return to the field for Day 10 of camp on Tuesday morning at 8:30.