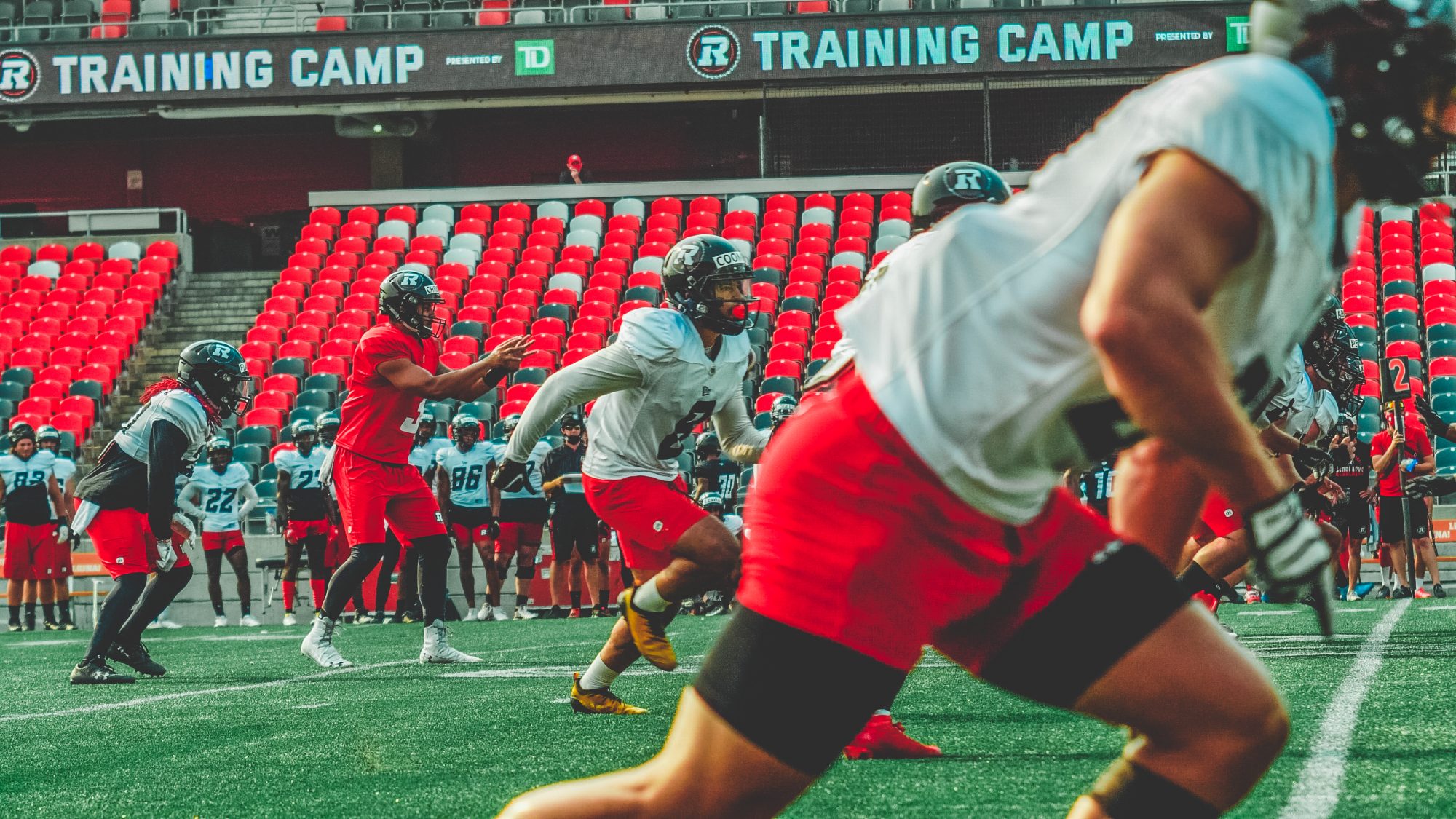 First taste of action: Training camp is a grind. It also gets a bit repetitive. On Sunday, the day-to-day routine was broken up a bit with a scrimmage instead of a traditional practice. There were a few refs, the play clock was used and coaches dispersed through the facility as they might during an actual game. “We wanted to show the players how we warm up before a game,” added Head Coach Paul LaPolice. “The coaches tried the new headsets, a couple of coaches went up (to the booth). We didn’t want to do a lot of plays… I think we only did 46 plays on offence and defence.”

Antoine Ramone? If you’ve followed the REDBLACKS closely over the years, you may know that Antoine Pruneau always wears a loose, sleeveless t-shirt featuring legendary punk rockers The Ramones under his jersey. It’s seen better days, but it’s still hanging on and #6 has an identical backup. “I just washed it for the first time in two years,” Pruneau joked at his media availability.

Speaking of Pruneau…the Day 1 REDBLACK enjoyed the more “realistic pace” of the scrimmage on Sunday, but it still wasn’t quite right. “We were missing a big part of what makes the game fun and that’s fans in the stands,” he said. A little over a month to go for that at TD Place, with at least 15,000 members of #RNation ready to come back home on August 28.

Spark plugs: The REDBLACKS defence talks. A lot. While some of that is good-natured (and clever) chirping between O and D, the latter is responsible for the majority of the decibel levels measured at practices. That’s no accident; the d-corps is being coached to communicate, to react to offences, make plays and take the ball away. As the MIKE — or middle — linebacker, for example, Avery Williams is regularly calling out instructions to his teammates. Other times guys are yelling just to fire each other up. “The energy is there, the energy has to be there,” explained linebacker Micah Awe, a regular voice coming out of the guys in black jerseys. “It creates this standard of, you have to play up to a certain level if you’re going to be loud. If you’re loud, you gotta be great.” Pruneau agrees: “There’s a focus in our meeting rooms on our philosophy on defence: being violent and communicating. We’re looking at self-scouting ourselves and making sure there’s communication on every play.”

Wedding bells: Speaking of Awe, heading into his fourth CFL season and first in Ottawa, became engaged to girlfriend, Meghan, three weeks ago. The couple, who has been together for seven years, met while they were both engineering students at Texas Tech — “It was the only class she got a B in…she ended up being a top environmental engineer.” She’s both his biggest supporter and football critic. “She’s always loved me for who I am. She’s very supportive, but critiques me a lot at linebacker, a lot more than y’all (media) do. If I miss a tackle she’s not very happy about it,” Awe said with a laugh.