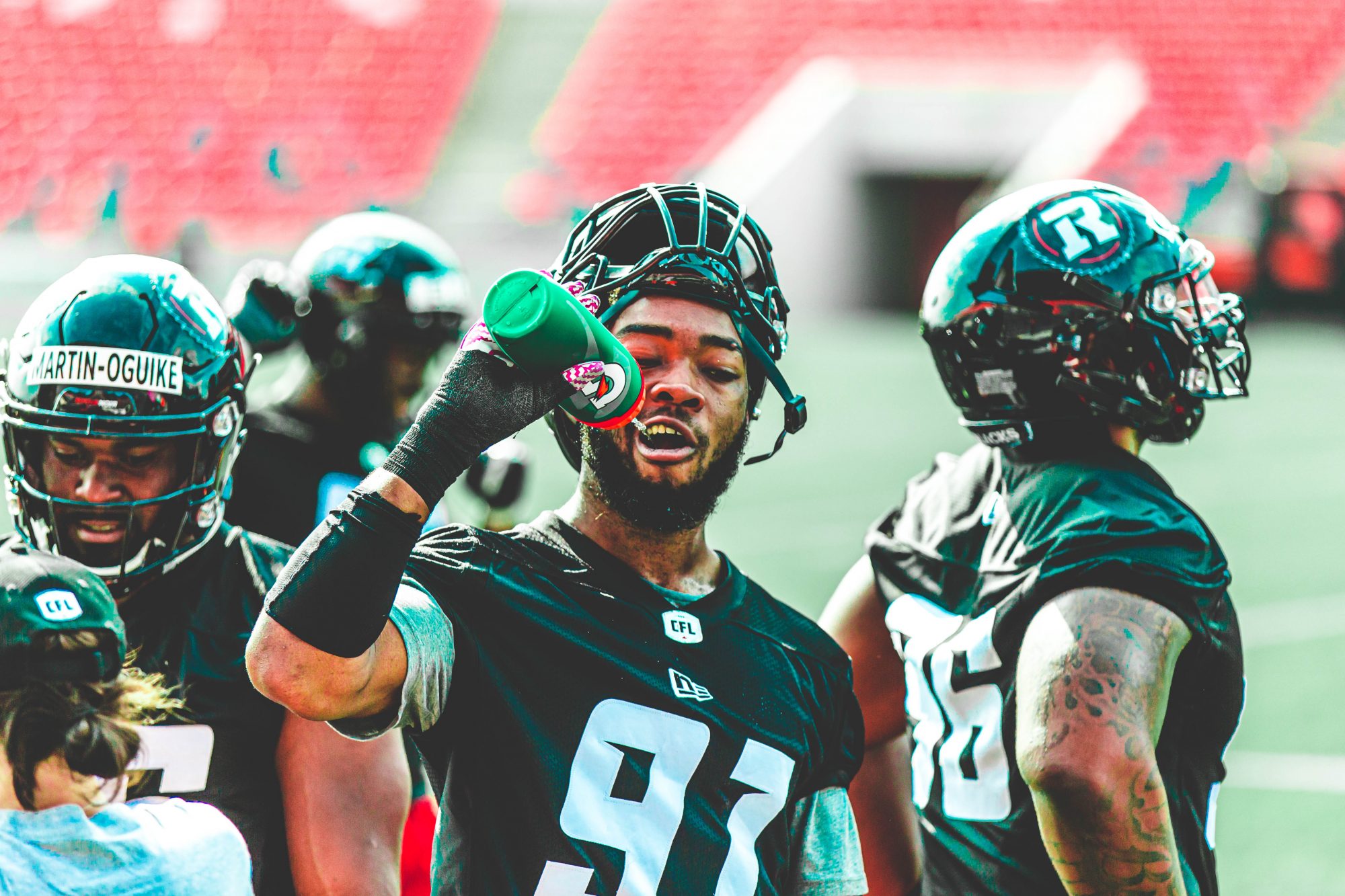 The team hit the field for Day 2 and it was a long one…what’s the deal with Don Unamba’s cool nickname?… Flanders is a rare running back/high school teacher hybrid and other notes from camp.

REDBLACKS Training Camp kicked into high gear on Monday with the first double practice session. These double practices are essentially one long practice with a 15-minute break in the middle. And no, it’s not just practice on these long camp days. For the curious: players arrive for breakfast, treatment and to get taped up around 6:30AM, get on the field at 8:30 and practice until about 12:20. That’s followed by lunch and treatment (camp is a grind) before getting back to position-specific meetings in the afternoon. Dinner rolls in around 6PM, followed by more meetings before the team calls it a day by 9PM.

Unamba or Obama?
The story behind veteran linebacker Don Unamba’s nickname, for those who haven’t heard it, is a good one. In a nutshell, when he came to training camp with Hamilton in 2018 with new defensive coordinator Jerry Glanville, the experienced coach didn’t know the names of most players. “But he knew I made plays,” explains Unamba, adding the Glanville would regularly ask who the player was. He did learn his name, though…sort of. “He eventually started botching my name and he started calling me Obama.” That morphed into The President and the nickname stuck. It’s also his Twitter handle.

Call him Mr. Flanders
Running back Timothy Flanders (and yes, it’s Timothy, not Tim) has been busy been during the prolonged football hiatus. Top priority: “Being the best dad I can be to my son.” After that, it was all about being a good teacher, with the Oklahoma native having spent his pandemic time as a long-term substitute in a local high school. Having already obtained his teaching certification and a college degree in Management Information Systems, the 29-year-old is currently finishing up a degree in Cyber Security. LaPolice praised Flanders, whom he coached in Winnipeg, following practice when asked about the benefit of a running back who is already familiar with his coach’s system: “The best thing about Timothy is he’s such a great teammate,” said LaPolice. “You’ve got as bunch of guys learning a new system and he’s getting people lined up and organized. He’s great with his protections and he’s a pretty dynamic back.”

Strong showing for familiar faces
Guys were making plays on both sides of the ball today, with a few returning REDBLACKS setting the tone. Receiver RJ Harris seemed to be catching everything thrown his way and Antoine Pruneau was being his disruptive self in game scenarios leading to an interception. Fellow DB Sherrod Baltimore also had a pick, leading to cheers from a rowdy defensive corps. LaPolice was pleased with what he saw from the defensive unit. “There’s a veteran presence on our defence, you can see how they fly around and Coach Benevides is doing a great job with them.” LaPolice has regularly said that takeaways — interceptions, fumble recoveries — were a priority for his team.

The REDBLACKS are back on the field Tuesday at 8:30AM as camp continues.