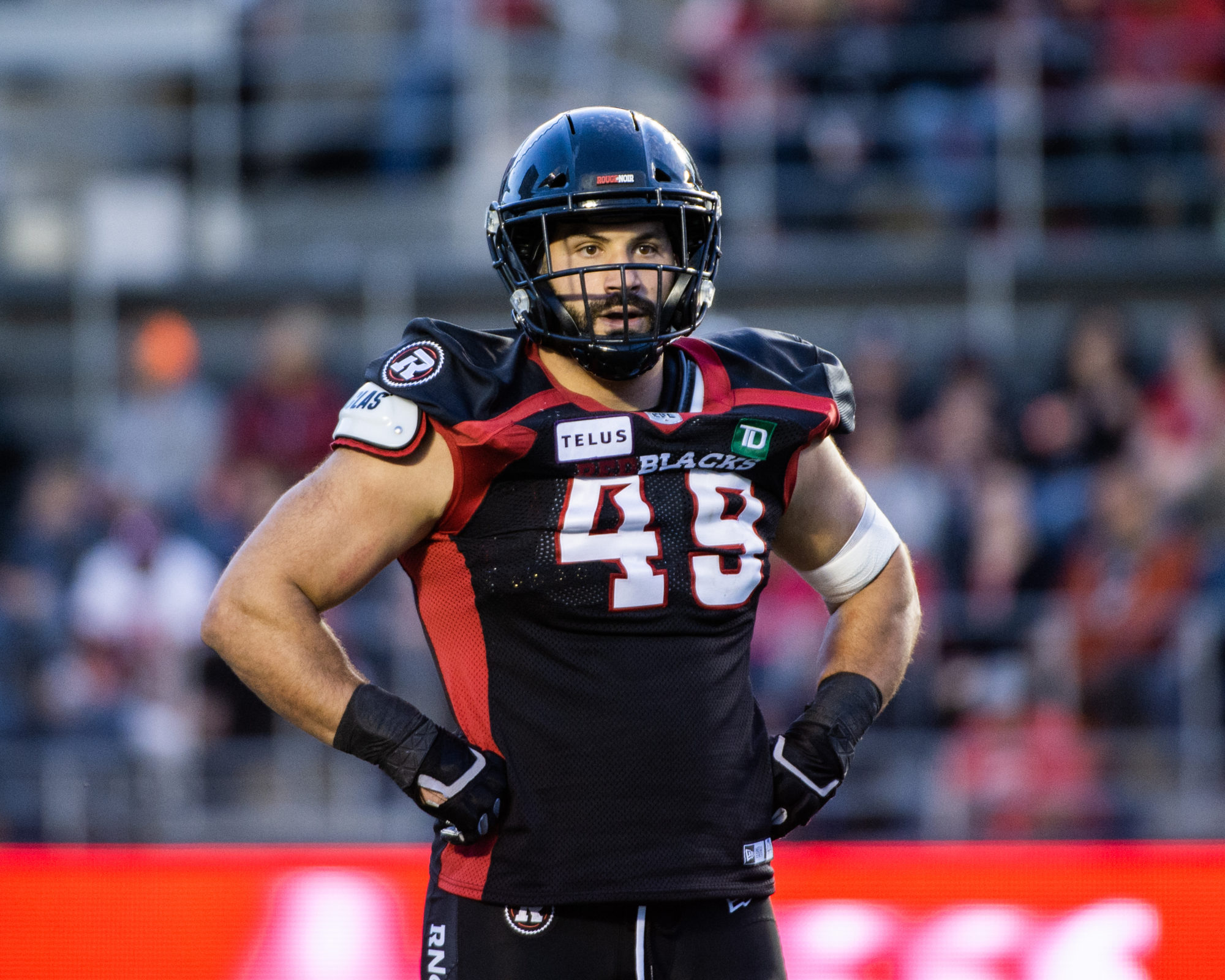 Ettore Lattanzio is a big fan of the “Rocky” movies, because of the story of the underdog beating the odds to achieve the ultimate goal.

While he’s gotten used to doling out the punishments on opponents, Lattanzio has gone through his own battles on the way to carving out a permanent role for himself with the Ottawa REDBLACKS. 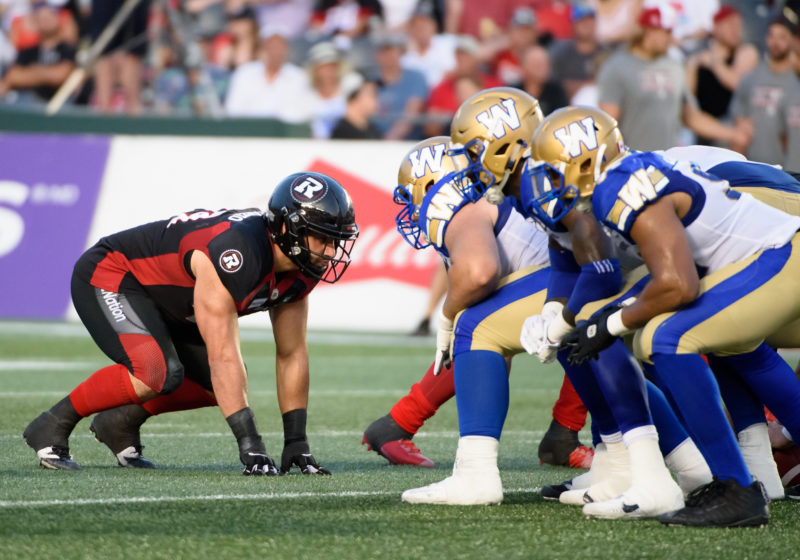 Lattanzio was training to be a boxer as a kid, with his father serving as his trainer. He picked up football at 11 and because of his size, he had to play up an age group. D-line came naturally to him and he continued to excel at the position.

He continued to improve and his passion earned him a spot on the University of Ottawa football team.

In his four seasons as a member of the Gee-Gees, Lattanzio appeared in 30 games, making 106 tackles to go along with 46 tackles for loss, 31 sacks, seven forced fumbles and three fumble recoveries.

Over his collegiate career, he was named an OUA Second Team All-Star in 2012 and a First-Teamer in 2013 and 2014, respectively. He was also named the OUA Lineman of the Year and a U SPORTS First-Team All-Canadian in his penultimate campaign. In 2014, Lattanzio earned the J.P. Metras Trophy as the nation’s top down lineman.

He was considered one of the top defensive lineman available in the 2015 CFL Draft and had an idea that he could end up close to home with the REDBLACKS. He slid down to the fifth round and Ottawa owned the opening pick of the round. However, the team went another way and Lattanzio was scooped up by the Winnipeg Blue Bombers with the 38th overall pick.

“I definitely didn’t think Winnipeg would pick me up because I talked to a number of teams and they weren’t one of them,” Lattanzio said to OttawaREDBLACKS.com. “I don’t believe they ever reached out to me personally either so it was definitely a shock. I thought I would be picked up by Ottawa but everything happens for a reason and that’s just one of thr things that happened to me.”

He went to Winnipeg’s camp and was expecting to battle for a spot on the defensive line, but the team had other plans for Lattanzio. Because of his 6-foot, 230-pound frame at the time, they asked him to slot in as a fullback.

Lattanzio featured in a single game for the Blue and Gold before he was cut following the first week of the 2015 season. He said that the same day he was let go, he was on a flight back home. He’d called his agent to inform him and the pair started discussing their next steps. Lattanzio knew that Ottawa was interested and when he landed from the flight and turned his phone on, he found out that he had a scheduled meeting with the team.

He was only out of work for a week before the REDBLACKS inked him to a deal. and that’s been the only home he’s known in the league ever since.

In his rookie campaign, he appeared in nine games, making two tackles while adding a sack and a forced fumble. In just their second season since returning to the league, Ottawa made it all the way to the Grey Cup, where they took on the Edmonton Eskimos. Things didn’t quite go their way, but things were looking up for the franchise.

2016 rolled around and Lattanzio got a bigger role within the team. He played in all but one game,

The REDBLACKS won the East Division crown in 2016 and made it to the championship, where they faced a daunting task in the form of the 15-2-1 Calgary Stampeders who were led by Bo Levi Mitchell.

Due to some lineup changes down the stretch, Lattanzio didn’t feature in the 104th Grey Cup game, but as an Ottawa native who helped the team in their journey to break the city’s 40-year championship drought, the win was so much sweeter for Lattanzio.

“I don’t think anyone thought we weren’t going to win, even though we were going up against big, bad Calgary,” Lattanzio said. “There was just something in the air and we had such a great leader in Henry Burris. We had a lot of other leaders as well but just having him at the helm.

“It was such a movie moment and that was kind of our season. We didn’t have the greatest season in the world, but we clawed back and proved everyone wrong. We got it done.”

Skip ahead two years and Lattanzio finally had the chance to play in a championship with the REDBLACKS at the 106th Grey Cup presented by Shaw in Edmonton. Unfortunately, the team came out on the losing end as Calgary exacted a measure of revenge on the team that had previously beaten them in 2016.

Lattanzio has been able to feature in 63 career games as a professional, where he’s accumulated 70 tackles, one special team tackle, eight sacks and a pair of forced fumbles over that span. But this past season proved to be the toughest for both he and the team. 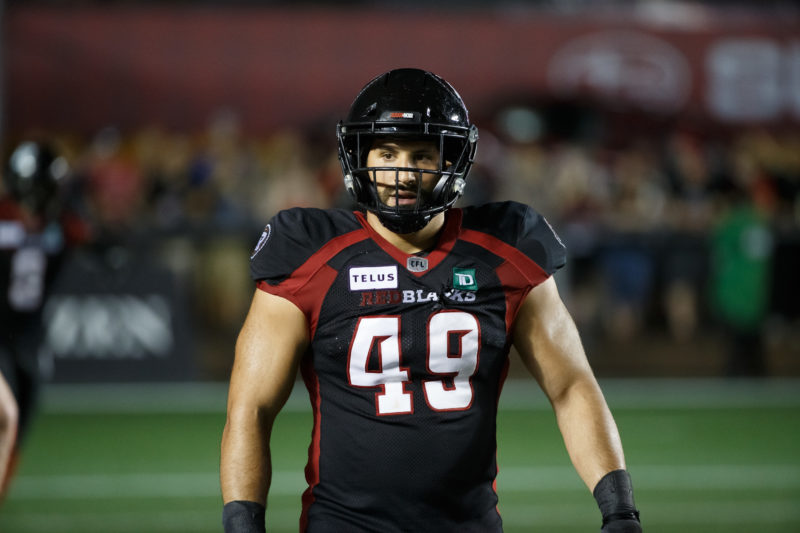 Ottawa opened the year with a 2-0 record but proceeded to drop 15 of their final 16 games of the season, leaving them last in the league standings.

“It’s tough, especially when you’re losing because it reveals the flaws and cracks in people,” Lattanzio said. “When you’re winning, everyone is happy and the fans are happy. But when you’re losing, that’s when you see the true colours; the worst thing you can do is get on top of each other and be ruthless and cutthroat.

“…if it’s raining, then put on rubber boots or get an umbrella. Don’t complain that you can’t wear shorts because it’s not a nice day, just do what you can to stay dry. Last season, it rained a lot. There were things that were out of our control. We couldn’t control that we lost our offensive coordinator, we couldn’t control injuries, but what we could control was how we were going to play on the field.

“We were firing on all cylinders, there was nothing that was lagging. We just needed to click and we never clicked. It’s in the past, there’s no sense in beating a dead horse. We learned from it and we just have to move forward from it.”

Lattanzio has spent his off-season working out and preparing for 2020. he and his wife, Julie, had their first child, Rosario, back in April. While she is on maternity leave, Lattanzio has been picking up shifts at the local beer store to bring in some additional income. He’s also planning for life after his career, as he’s working towards getting his real estate license.

He believes that if he never played football again, he’d still be working out at the same rate because of his love of lifting weights. So Lattanzio is more than ready to get going whenever that call comes, and he’ll be hoping to help the REDBLACKS back into the postseason in 2020.