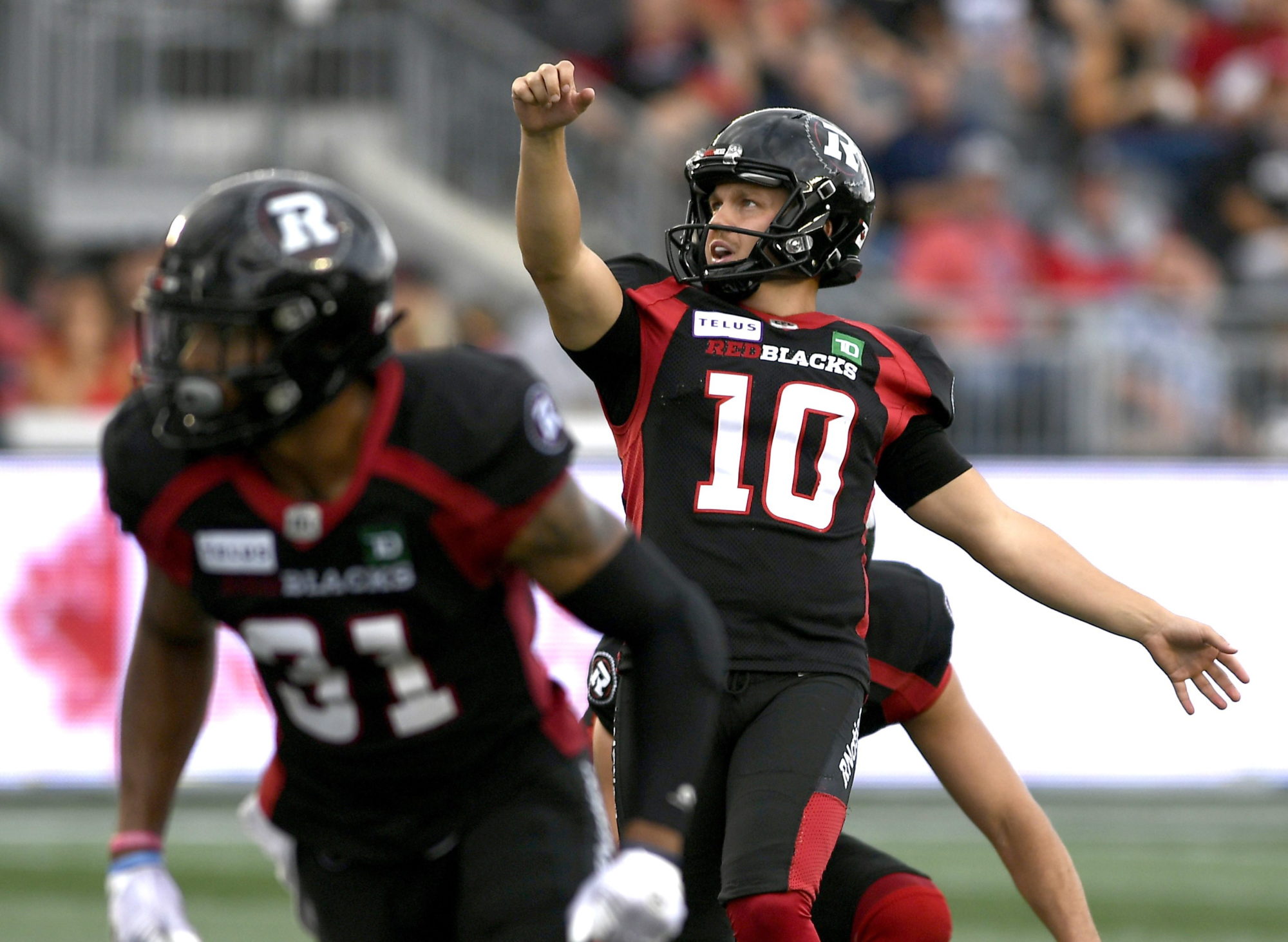 When Lewis Ward looks back on his journey to this point, he believes that joining the Ottawa REDBLACKS was meant to be.

“I reflect on my university career more than anything and just working to get to the pro level,” Ward said to OttawaREDBLACKS.com. “Ottawa called and that was pretty much my only option and so that’s how I feel it was supposed to go.

“You get these things that get put in front of you, and you go that way and make everything of it. So I truly think that’s how things worked out for me.”

Since entering the CFL two seasons ago with the REDBLACKS, Ward has become one of the most dependable kickers in the league, and he just continues to improve with every passing game. 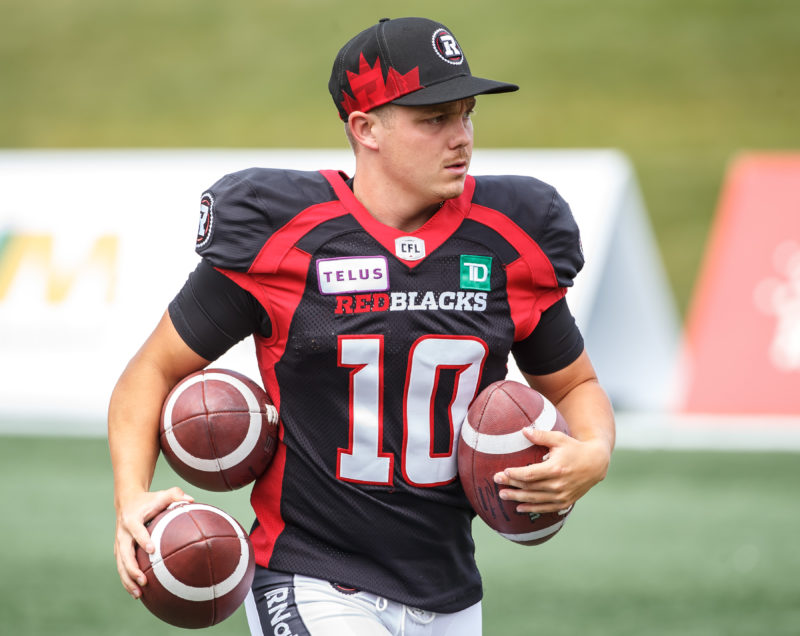 Ward was born in England but because of his father’s job, his family moved to Switzerland when he was young. Ahead of going into high school, he made the move once again, this time to Kingston, Ont.

Ward excelled in soccer growing up, so when he decided to take up football, a transition to kicker seemed natural. However, with his size, he was mostly utilized as a tight end.

When his collegiate career was said and done, Ward was one of the most accomplished kickers in both Ottawa and U SPORTS history. He still holds the program record most converted kicks in a season (24), field goals made in a game (6). He’s also the leader in career field goals made and career points scored (412) — he sits fourth all-time in U SPORTS history in both respects.

Despite his success as a member of the Gee-Gees, Ward went undrafted in 2017, and while he had talks with a few East Division squads, he also didn’t receive a camp invite.

With his football future up in the air, Ward returned four his fifth and final year of eligibility with Ottawa.

After deciding to attend the University of Ottawa, he made the decision to stay in the nation’s capital year-round to have better access to the coaches, gyms and fields that the program offered.

While going to school, Ward also worked a job on the side. He decided to attend a job fair at TD Place and wound up landing a gig as a security guard at the stadium. He was able to work various REDBLACKS games as well as the 2015 FIFA Women’s World Cup. He was also able to be in attendance for the 105th Grey Cup presented by Shaw in 2017.

After waiting for a chance to prove himself at the pro level, the REDBLACKS came calling ahead of the 2018 season. With Brett Maher departing for an opportunity with the Dallas Cowboys in the NFL, the team was looking for competition at the position. They brought in Ward, Richie Leone, Sergio Castillo and Mathieu Herbert. 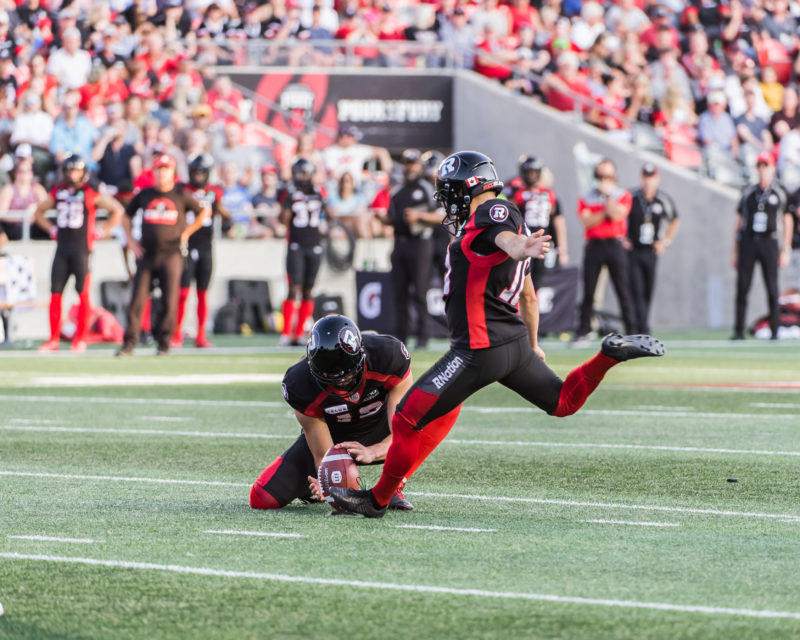 They held a competition between the four and Ward hit all four of his kicks.

“I think when the team made the final round of cuts, I came in for meetings — like I did every morning. I just had breakfast and sat in my locker,” Ward said. “Sergio’s stuff was still there but I hadn’t seen him yet. We went into the meetings and I still didn’t see him.

“We went into the special teams meeting with the specialists, and it was LP (Louis-Philippe Bourassa), Tanner — our other long-snapper at the time — Richie and coach Dice. And he just sat there in this little meeting room and just said, ‘Well, I guess you can all kind of see the obvious. This is what we’re running with this year, these are my expectations and this is what we’re going to run.’”

In the end, Ward would make the REDBLACKS’ decision look fantastic. In just his sixth career CFL game, Ward tied an Ottawa Football Club record by hitting seven field goals in a victory over the Hamilton Tiger-Cats.

Under a month later, he’d break Luca Congi’s record of 21 consecutive field goals made by a rookie.

Ward was automatic for the REDBLACKS, as he went on to break Rene Parades’ consecutive field goal record of 32 in September of that same season — in that game, he also had another seven field-goal performance in that outing.

Finally, he broke Adam Vinatieri’s record of 44 consecutive kicks made. Ward finished the year with 51 of 52 field goals made (98 percent).

He broke both the CFL all-time record and Vinatieri’s record in front of the home faithful, and his parents were able to be in attendance to see both occur.

“To have it happen at home where friends and family can literally be in the stands to watch it happen, it’s something special and something that not everyone gets to experience,” Ward said. “I’m just fortunate to be able to play so close to home and have my parents come to every home game and support me. I see them after every game so that’s definitely something that’s very special and meaningful.”

For his efforts, Ward was named the 2018 Most Outstanding Rookie and helped Ottawa make it to the Grey Cup.

Ward continued his field goal streak in the 2019 season. He got all the way up to 69 straight before he pushed a 34-yarder to the right against the Hamilton Tiger-Cats in Week 10.

“I was more disappointed that I missed the kick than anything else, not so much that (the streak) was done and over with,” Ward said. “It was more just frustrating because it was a bad kick. It wasn’t a terrible kick, it wasn’t a great kick, I just hit it low and it just kept pushing and pushing. It went over the upright, but ultimately, they called it no good.” 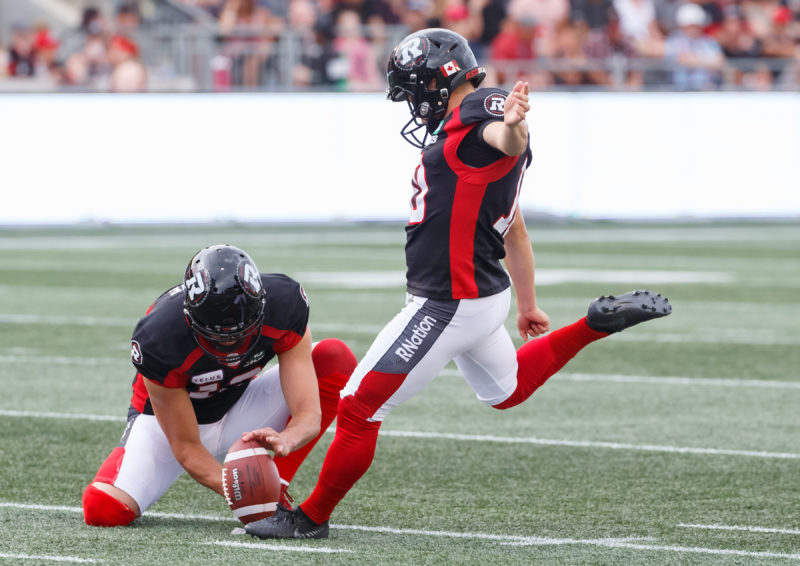 Despite that, Ward finished the season with 43 made field goals on 50 kicks and set a new career-high with a 56 yarder, which also set the franchise record in the process.

Heading into 2020, Ward remains one of the best kickers in the league, and following a disappointing 2019 campaign for the REDBLACKS, the team has gone through a retool.

With Paul LaPolice leading the team and Nick Arbuckle under centre, Ottawa will be doing their best to ensure that last season was a one-time occurrence.

Ward, along with some of his teammates, have experienced the high of making it all the way to the Grey Cup. With any luck, they’ll be able to push for the playoffs once again this time around.

“I would like to do something like we did in my first year where we made a playoff run,” Ward said. “Ultimately, the goal is to win a Grey Cup but I would just like to contribute the way that I did and help us win football games.

“Other than that, I’d just really like to do some positive things again. Put away what we’ve done the last couple years and just start again.”