Baltimore Thankful for the Opportunity to Play Football 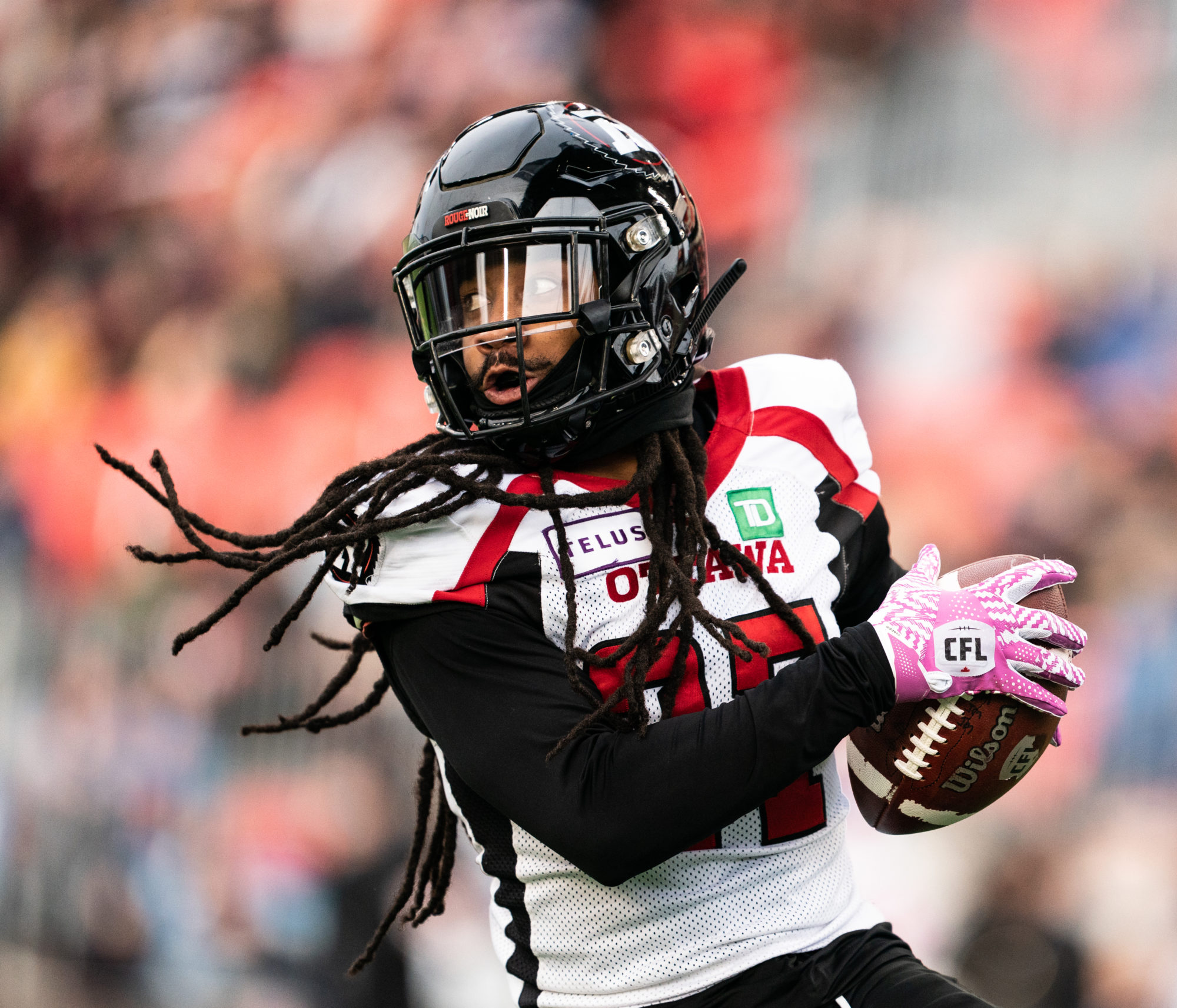 Baltimore Thankful for the Opportunity to Play Football

At 12 years old, Sherrod Baltimore was robbed at gunpoint. There’s a chance that his life could have ended on that day.

“I reflect on it. Not to always think about it like every day, I’m thankful,” he said to OttawaREDBLACKS.com. “Every day I pray I read my Bible every day, God I’m just thankful. I thank God for what I have.

“Every day I wake up. When I come to do things like this when I’m going to the stadium definitely before games it hits me and I’m thankful.”

The REDBLACKS’ defensive back is through three seasons north of the border prior to a successful collegiate career. He’s become a staple in the Ottawa secondary but it was far from an easy road to the pros. 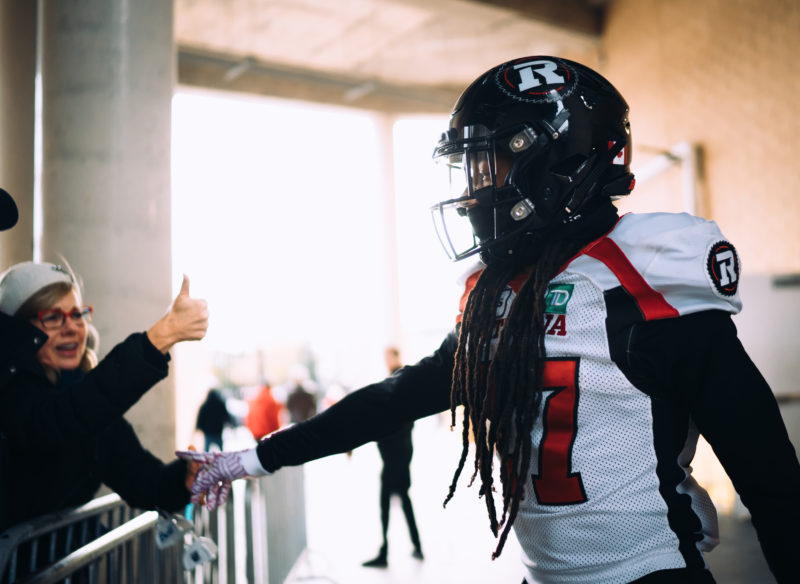 Baltimore is from Prince George’s County, Maryland, but he did move around during his childhood. He began playing both football and basketball at the age of six. Baltimore started out with the Oxon Hill Roadrunners, where he played as an offensive lineman before making the switch to running back. In his final year of Pop Warner, he’d be switched to quarterback by his head coach at the time. That would be the position Baltimore would stick with for the majority of his high school career.

Peter Quaweay, one of Baltimore’s coaches in high school, made another position change, putting him at defensive back in his senior year of high school. Quaweay, a former defensive back at Michigan State as well as an NCAA defensive backs coach, knew that was the best decision for Baltimore to have a shot in the NCAA. He’d make it, committing to play for the University of Maine.

During his career with the Black Bears, Baltimore appeared in 43 contests, making 79 tackles while adding three interceptions, 14 passes defended and one fumble recovery.

Following his pro day, Baltimore went undrafted and opted to stay with Maine and work on the staff while preparing for another run at being drafted the next year.

“I’m training. We’d practice every day and at the practice, I go do my workouts. Backpedal, break, shuffle and lift. I lifted every day in the morning,” Baltimore said. “I’d come in and get my lift in. I trained for the whole year.”

When NFL and CFL scouts would come in, Baltimore said that he’d always ask them if they were in need of defensive backs. One day, Ottawa REDBLACKS director of player personnel Jean-Marc Edmé was scouting Maine players, and he and Baltimore got to talking.

“I’m like ‘hey man, what you’re doing here in Maine?’ He said recruiting talent, he’s like ‘man you ever heard of Canada?’ I said yeah. He said ‘what do you know about Canada?’ I’m like ‘uh Drake. The six. I didn’t know too much about Canada like that,’” Baltimore said. “But he went on to tell me some history and culture about Niagara Falls and about the diversity in Canada and we didn’t even talk football but at the end.”

Baltimore sent Edmé his game film, and after he reviewing it alongside general manager Marcel Desjardins, the DB was ultimately invited to try out for the team. He’d make it through camp and crack the practice roster.

In 2017, Baltimore would get an extended shot to impress the REDBLACKS and he ran with the opportunity, racking up 47 tackles in 13 games en route to being named the team’s Most Outstanding Rookie.

His first CFL game came on July 24 against the Toronto Argonauts. He immediately made an impact, making five tackles in the game. Despite his solid showing, the game symbolized much more for Baltimore. 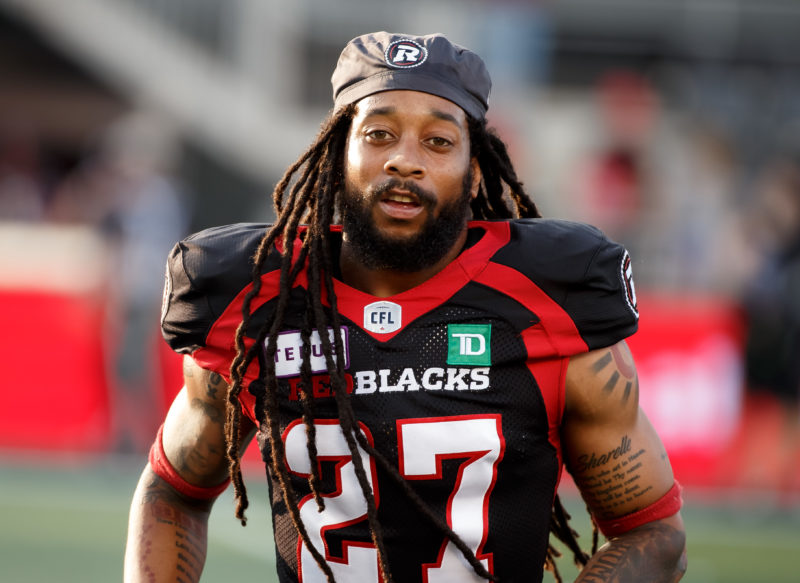 “Before the game and even still to this day I get emotional, just because where I come from, only the strong survive,” he said. “You’ve got to be strong to make it out to be living past 21. So, me being in the pros, I know I’ve got a lot of my friends and my family’s looking up to me, just watching me. So it felt good; I was emotional a little bit.

“But once you get that first play off, I was trying to make plays. Time to do what you’ve been doing in practice and show you belong here.”

In his second season in the CFL, Baltimore hauled in two interceptions to go along with 15 tackles in 13 outings. He also featured in his first Grey Cup against the Calgary Stampeders in 2018, going head to head against the West Division giant led by Bo Levi Mitchell.

“Walking into the stadium, I’m looking up in the stands, like, this is real deal. I’m getting emotional now,” Baltimore said. “I came from nothing to him playing in the Grey Cup, the big show this the real deal.”

He finished the game with four tackles and a pick on the night, however, the REDBLACKS would come out on the losing end of the 106th Grey Cup. He says that he still wakes up a night and thinks about that game.

The 27-year-old has become a presence in the community in Ottawa, as he likes to be involved in any types of sports in the city. Whether it’s the annual Panda Bowl between the University of Ottawa and Carleton or the Ottawa 67’s games. He’s also excited to see Atletico Ottawa start play this season.

Heading into his fourth professional campaign, he’s looking to help turn the REDBLACKS’ fortunes around following a tough 3-15 2019 season. On the field, he’s striving to bring home All-Star honours and his first Grey Cup in 2020.

“This life is real. One percent of the people that you grow up with are going to make it in your class and I really didn’t understand that,” he said. “It means a lot to me. Everybody wants to pro athlete life, but it comes with a lot; a lot of hate, a lot of love. A lot of highs and lows.

“You signed up for it. This pro life is real. You’re not just on TV playing on Sundays. You got to be able to do a lot of those things so that’s what I mean by one percent. I’m a one-percenter.”

You can listen to the full interview with Sherrod on this week’s episode of our podcast REDBLACKS Unfiltered here.