REDBLACKS come up short in Toronto

REDBLACKS come up short in Toronto

The Ottawa REDBLACKS had no response for the Toronto Argonauts at BMO Field Saturday evening, as Toronto scored 31 unanswered points to win 39-9.

Will Arndt made his third straight start, completing 65 percent of his passes for 185 yards and a touchdown. He didn’t throw an interception for the second consecutive week.

Kevin Brown led Ottawa with 11 total tackles, although the REDBLACKS failed to record a turnover in the game.

Toronto opened the scoring midway through the first quarter. Bethel-Thompson connected with Armanti Edwards for the former’s league-leading 25th touchdown pass of the season. Toronto held a 7-0 lead at the end of the first 15 minutes.

Ottawa struggled to move the ball for the majority of the first half, until Arndt fired a deep ball for Dominique Rhymes. The 1,000-yard receiver made smart adjustment as the ball was in the air to slip in front of his defender and haul in a 36-yard touchdown pass. A two-point convert tied the game at eight.

The Argos retook the lead moments later as Chandler Worthy fought his way into the end zone, making the score 15-8 at the half.

Toronto came out of the halftime break firing on all cylinders. Rodney Smith and A.J. Ouellette each had touchdown receptions in the third quarter, while Zack Medeiros made a 30-yard field goal. A former REDBLACK, Medeiros only suited up for the game when starter Tyler Crapigna was injured in warmup.

Ottawa-area native Michael O’Connor made his CFL debut in the fourth quarter. His first career touchdown pass went to Smith, who also caught Prukop’s first touchdown pass earlier in the game. A late Lewis Ward single made the final score 39-9.

Toronto (4-13) round out their season on the road against the Hamilton Tiger-Cats on Saturday, November 2. 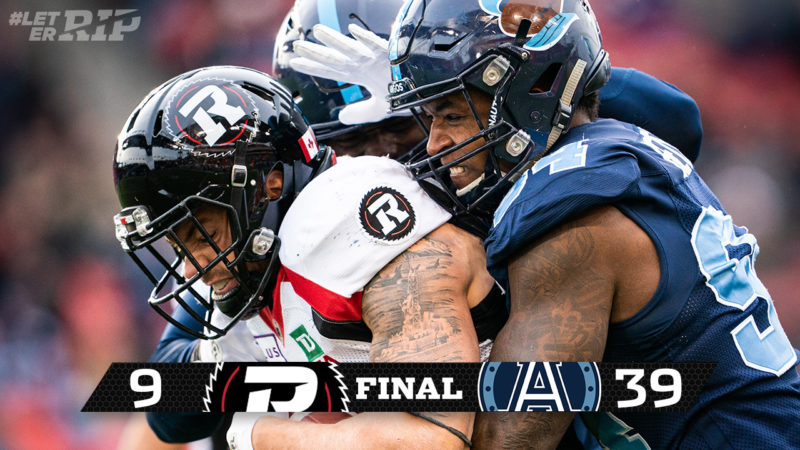 “I’m hurting right now because I know we can show better than that. We just didn’t look like a good football team tonight. Too messy, too many mistakes, too many penalties, that’s the part that’s frustrating. I don’t question people’s effort, but I do question our execution of being able to do some basic things well and I want to show up Friday night better than it was tonight.” – HC Rick Campbell

“It’s frustrating for everyone in the locker room. Our fans deserve better and it’s disappointing that we weren’t really in this one. [Tony Gabriel] is obviously an incredible person in Ottawa football history and just to be able to be here for this long and have this opportunity means more than actually surpassing that.” – REC Brad Sinopoli

Brad Sinopoli reached two milestones on Saturday. With a 13-yard catch late in the second quarter, he passed Tony Gabriel for the most receptions in Ottawa football history with 445. His next reception, a short check-down on a successful two-point convert attempt, was the 500th in Sinopoli’s career… O’Connor hails from Orleans, Ont., and played high school football at Ashbury College. His final line read 5-for-9 passing for 61 yards and a touchdown pass… S.J. Green reached 1,000 receiving yards on the season in the first quarter.