REDBLACKS go down to wire versus Eskimos

REDBLACKS go down to wire versus Eskimos

The Ottawa REDBLACKS clawed their way back, but ultimately fell short against the Edmonton Eskimos, losing 21-16 Saturday afternoon at TD Place.

Dominique Davis got the majority of reps at quarterback for the REDBLACKS, throwing for 215 yards before being injured in the fourth quarter. Jonathon Jennings completed seven passes for 58 yards, while the REDBLACKS didn’t turn the ball over.

Neither offence could get much traction in the first half. Sean Whyte kicked a pair of late field goals and Hugh O’Neill earned a single. Lewis Ward kicked a three-pointer for Ottawa, making the score 7-3 after 30 minutes.

The Eskimos orchestrated a nine play, 66-yard drive to open the second half, capped off with a Logan Kilgore plunge into the end zone to make the score 14-3.

A 52-yard field goal from Ward cut into the Edmonton lead at the outset of the fourth quarter. On the very next drive, back-to-back completions to Dominique Rhymes and Brendan Gillanders got the REDBLACKS to the goal line. Davis punched it in and stayed out to the convert the two-pointer, tying the game.

Midway through the fourth, Edmonton marched down the field and Kilgore connected with Tevaun Smith for six, but Ottawa was still within a possession.

The REDBLACKS got the ball back with under three minutes to go, but their comeback attempt fell short, snapping Edmonton’s four-game losing streak.

Ottawa (3-11) are on a bye next week and travel to face the Toronto Argonauts (3-10) on Friday, October 11. They return home for the final game of the regular season on Friday, November 1 when the Montreal Alouettes are in town. Kickoff is scheduled for 7:00 p.m. Edmonton (7-7) visits the Hamilton Tiger-Cats on Friday, October 4. 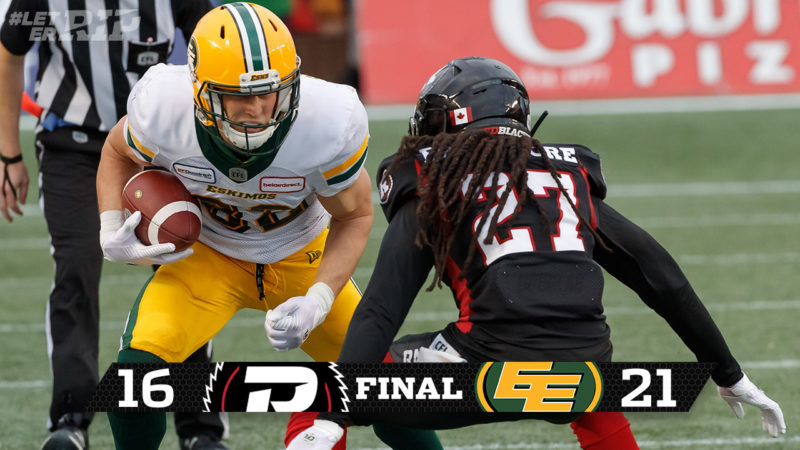 “We came up short – disappointing. We were fighting there all the way to the end and literally came up short by a few inches. The name of the game is winning. I was proud of the way our guys kept fighting and kept on working and believing. That’s more typical of the way we can play – being in close games because a lot of games in this league are close or come down to the wire.” – HC Rick Campbell

“It’s still a loss. If we’re happy that it was a close game, what does that do for us? Just trying to get that win and we didn’t in the end, so that’s all that matters,” – REC Brad Sinopoli

Saturday was a homecoming for a number of former REDBLACKS. Eight current Eskimos spent time in the nation’s capital, including Trevor Harris (injured), Greg Ellingson, SirVincent Rogers (injured) and Tommie Draheim… Linebacker Jerod Fernandez returned to the lineup for the first time in five weeks… The teams combined for 13 punts in the first half… With 7 catches for 104 yards on Saturday, Dominique Rhymes remains on pace for his first career 1,000-yard season. 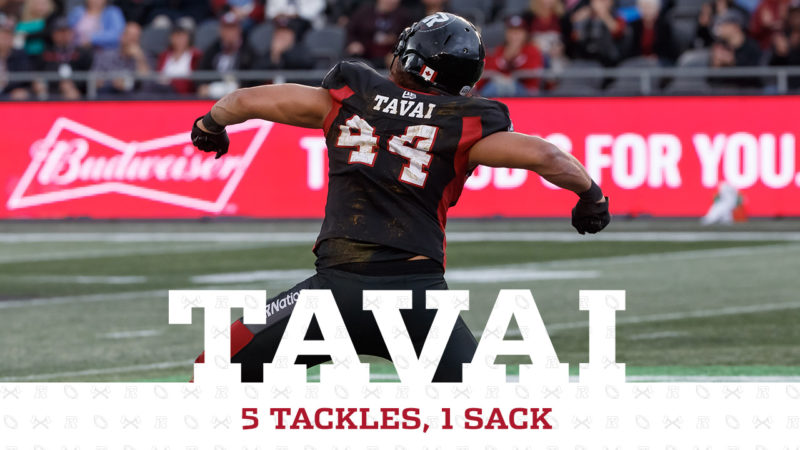 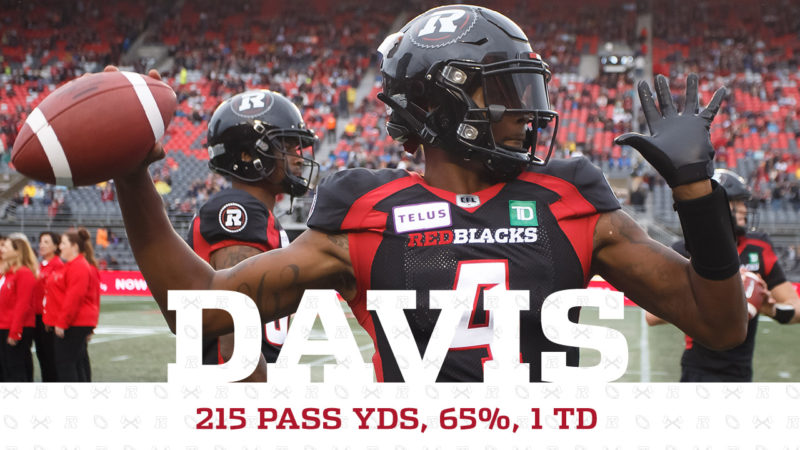