Kaye Vaughan will be added to the Wall of Honour at TD Place Stadium on September 21 as part of the Redblack’s Heritage Day. Kaye becomes the 12th former CFL Ottawa player on the Wall of Honour. He joins six former teammates Russ Jackson, Ron Stewart, Whit Tucker, the late Bruno Bitkowski, the late Bobby Simpson, and the late Moe Racine. The most recent player added was Henry Burris. Others on the Wall are the late Tony Golab, the late Jim Coode, Tony Gabriel and Gerry Organ.

Recently the CFL Ottawa Alumni Association Board of Directors created a committee (Jim Foley, Bob McKeown, Jim Cain and Jeff Avery) with the co-operation of the Redblacks to determine criteria for honouring players, past and future, to be added to the Wall of Honour. After much discussion and research the CFL Ottawa’s Board’s top selection was Kaye Vaughan. Other former outstanding players will be honoured in subsequent years. 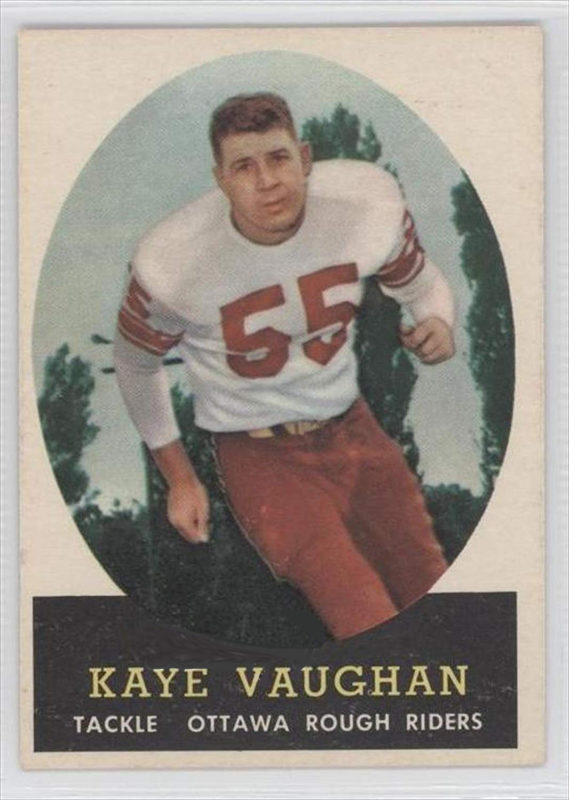 Kaye played 12 seasons for the Ottawa Rough Riders of the Canadian Football League and was inducted into the Canadian Football Hall of Fame in 1978. He was selected for the Schenley Most Outstanding Lineman Award in both 1956 and 1957 and was also a finalist in 1960. Kaye won the two Schenley awards after missing the entire 1955 season after breaking his leg in the pre-season.  The CFL All-Stars were not created until 1962, which was near the end of Vaughan’s career, but he did win that honour at Middle Guard in 1962.

Vaughan was also selected as the 41st best CFL player since 1945 in an extensive TSN Poll in 2006. The only Rough Rider player also selected was Russ Jackson at #8. Many other legendary Rough Riders received Honourable Mention but were not in the top 50.

He also recovered a fumble for the clinching touchdown in the 4th quarter of Ottawa’s 1960 Grey Cup victory that made the score 16 to 6 which was the final score. It was Kaye’s only touchdown in his career and came at a great time.

Kaye along with the late Marv Bevan were the two pulling guards in 1960 when Ron Stewart rushed for an astounding 287 yards, which is still the CFL record 59 years later, in a game against the Montreal Alouettes. Kaye still can remember some of the blocks he threw on one of Stewie’s long runs.

Vaughan played his college football with Tulsa from 1950 to 1952, appearing in the Gator Bowl in his senior year.  Vaughan was a 12th round draft pick of the Baltimore Colts of the NFL, but elected instead to come to Canada to play professional football. Vaughan is a member of The University of Tulsa’s Sports Hall of Fame, and the Ottawa Sport Hall of Fame.

In 1960 Kaye married Lucile Wheeler.  Lucile too was a great athlete having won a bronze medal at the 1956 Winter Olympics in downhill and then in 1958 was a double world champion in downhill and giant slalom and was the recipient of The Lou Marsh Trophy as the 1958 Canadian Athlete of the year. Lucile is also a member of the Canadian Sports Hall of Fame.

In 1967 Lucile and Kaye moved to The Eastern Townships, Quebec, where Kaye accepted a position at The District of Bedford School Board. He worked there for 23 years as, a teacher, coach, guidance councilor, and board administrator, retiring in 1990. Lucile and Kaye have two children Myrle and Jake (Toronto Argos 1986-87), and five grandchildren.

Kaye will be added to the Wall but his number will not be retired as was also the case with Henry Burris. The Redblacks are no longer retiring numbers since it is problematic with the larger roster size that teams have these days and the requirement to have certain positions within a specific range of numbers.